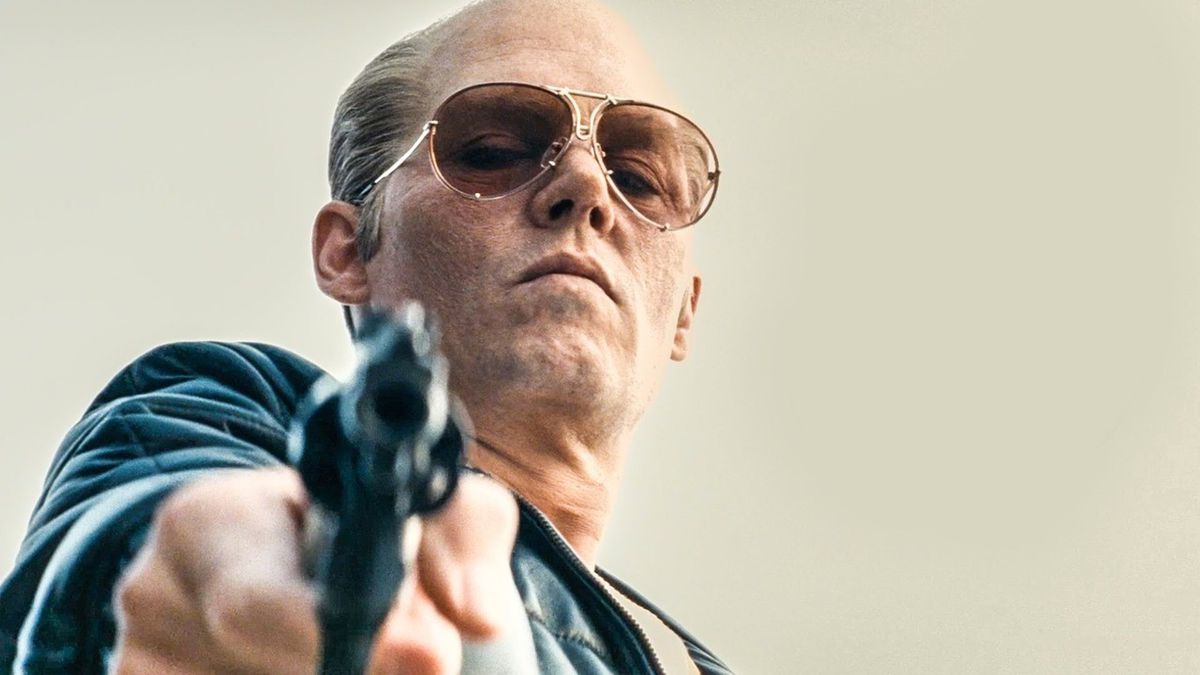 He stands apart, even in the midst of his underlings, coolly weighing the situation with dead blue eyes and a grim, implacable expression on his face. Combined with his thinning gray hair and unnaturally pallid complexion, the man’s crooked, discolored teeth and the set of his jaw give him a feral look, as if he were an animal of prey, waiting for the right moment to come in for the kill. It’s the face of a buzzard or a nightmare rat. But the lingering impression is that of a vampire. This calm, wiry, predatory being exists to suck the life force out of whatever comes into his radius, leaving nothing but waste.

Arch-criminal James “Whitey” Bulger, subject of Scott Cooper’s rewarding but chilly true-crime thriller Black Mass, treated the Boston area to a New England clambake of mayhem and corruption for more than four decades, before he went underground in 1994. Captured, tried, and convicted in 2013 for eleven murders and 31 other criminal counts (racketeering, extortion, weapons charges, money laundering), Bulger was sentenced to two consecutive life terms plus five years, and currently resides in a federal prison in Florida. The Irish-American one-time kingpin of Southie represents, for many, the shame of his hometown, a repulsive thug who took the concept of crime boss to unheard-of new levels.

The job of impersonating Jimmy Bulger (he evidently disliked the nickname Whitey) is probably the last thing we’d expect from movie star Johnny Depp. For most of the past twenty years, Depp has portrayed fey, whimsical characters along the lines of Jack Sparrow, the Mascara’d hero of the hit Pirates of the Caribbean series, or the Mad Hatter from Alice in Wonderland. The epitome of harmless. With Black Mass, the 52-year-old actor turns over a new page in his filmography, in a performance so startling he can never go back. He completely disappears into a “horror” role of singular loathsomeness. Introducing Whitey Scissorhands.

As laid out by director Cooper (Crazy Heart, Out of the Furnace) and screenwriters Mark Mallouk and Jez Butterworth — adapted from the book by reporters Dick Lehr and Gerard O’Neill — Bulger’s career is related in chronological flashbacks. Boiled down to its essence and leaving aside the incidental murders and betrayals, the South Boston leader of the Winter Hill outfit figured out a way to use the FBI — with the connivance of neighborhood pal and turncoat G-man John Connolly (Joel Edgerton) — to run interference against Bulger’s chief rivals in the Boston rackets, the Patriarca family, in exchange for carefully doled-out “tips” that effectively gave Bulger and his associates immunity from prosecution and turned the Boston branch of the FBI into gold-plated suckers. Factor in the protective influence of Bulger’s politician brother Billy (Benedict Cumberbatch), a Massachusetts state senator, plus the clannish devotion of thousands of working-class Irish Americans on the street, and Bulger held the power of life and death over an American city.

Black Mass is packed to the rafters with intense, unforgettable supporting characters. Julianne Nicholson is outstanding as Connolly’s wife, who instinctively recoils from Bulger — when he corners her, the way he wipes his hand across her face is as ugly as any rape scene. The killing of cocaine dealer “Balloonhead” Halloran (Peter Sarsgaard, in fine form) is likewise unnerving. Actors Jesse Plemons, Rory Cochrane, and W. Earl Brown are all excellent as Bulger henchmen, matched against John Morris, Cory Stoll, and Kevin Bacon on the FBI side. We get the full mickey when Edgerton’s Connolly and Cumberbatch’s Billy Bulger sit down and iron things out the old-fashioned Irish way with a glass of whiskey — a pair of hyenas, the ideal antidote to Auld Sod sentimentality. For the likes of them and Bulger, it’s the Irish against the world.

Creepy guy, creepy movie. Cooper’s somber tone extends to Junkie XL’s music score and the Seventies-style cinematography of Masanobu Takayanagi. Depp gives a career performance, but Bulger, his friends, and their brutal milieu are not something you’d want to take home with you at night. The Martin Scorsese/Jack Nicholson version of the same general story in The Departed was an evening at the carnival compared to the sepulcher Depp and Cooper build for Whitey. If you can take it, it’s a remarkably effective fright film.