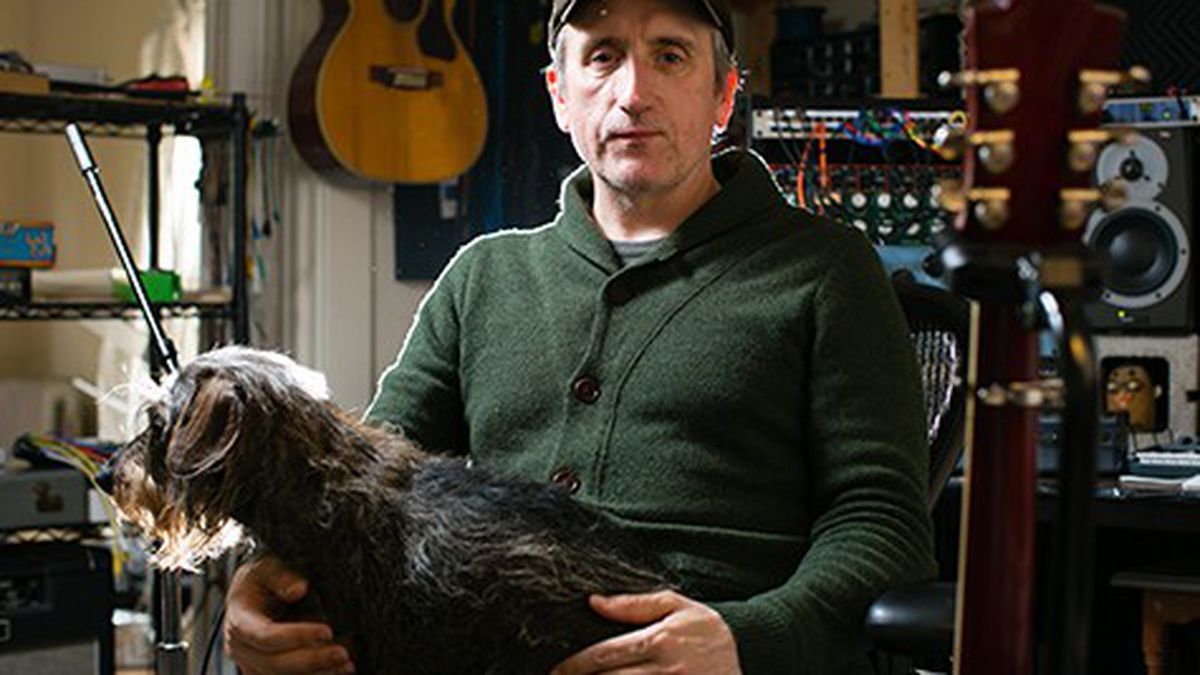 The Oakland musician prepares to pervert and misuse instruments anew.

To Oakland musician Chuck Johnson, a graduate degree in electronic music and a homespun acoustic guitar style are perfectly compatible: “What appealed to me about electronic music — that’s something I get at with the guitar, in terms of harmonics and texture.” His discography, however, is compartmentalized: Synth excursions under an array of monikers, notably Pykrete; solo guitar under his own name. And he’s best known for the latter.

That made Johnson’s full band performance the other week especially significant. It was the release event for his latest album, Velvet Arc, at the Starline Social Club, and Johnson, 47, assumed a monastic disposition on stage, swaying in time while the brim of a ball cap obscured his face. The group performed album opener “As I Stand Counting,” setting the low, droning thrum of Johnson’s fingerpicked electric guitar atop drummer Alex Vittum’s syncopated shuffle. Johnson simultaneously thumbed a lustrous low-end motif and elicited elliptical melodies from the guitar, all while minding the rhythm section’s nimbly fragmented groove. Like the recording, it evoked western and psychedelia alike, but absorbed the audience with its idiom-resistant emphasis on collaborative expression.

“It ended up with a German kosmische feel,” Johnson said, referring to pulsing, synthesizer-oriented Seventies rock. “We didn’t set out to do country Neu, but that’s the benefit of not rehearsing.”

Johnson recorded the bulk of Velvet Arc in 2014 alongside his previously released album, Blood Moon Boulder, in sessions at a West Oakland warehouse that belongs to the New Music figure and experimental ensemble leader Paul Dresher. Blood Moon Boulder, like most material Johnson releases under his own name, principally features solo acoustic guitar. For Velvet Arc, however, he invited Vittum and bassist Ben Bracken, among other guests, to collaborate in the studio. It’s his first album with a full band in more than ten years — since his tenure in avant-rock outfits such as Shark Quest and Idyll Swords back in Chapel Hill, North Carolina — and it signals Johnson’s growing interest in colliding his disparate influences and tendencies more overtly.

Johnson is often associated with the so-called American Primitive guitar tradition. Typified and nurtured in the Sixties by John Fahey and his Takoma label, it venerates expanding on the acoustic, usually fingerpicked stringed-instrument techniques found in earlier American folk music. In recent years, players such as Steve Gunn and Daniel Bachman have brought the lineage forward, galvanizing critics and younger listeners alike. Johnson joined their ranks in 2010, when an acoustic piece of his, “A Struggle, Not a Thought,” opened the Tompkins Square label’s Beyond Berkeley Guitar compilation, curated by local guitarist Sean Smith. It was Casey Bull, daughter of Sixties psych-folk player Sandy Bull, who brought Johnson to Smith’s attention.

However, Johnson isn’t a revivalist. He identifies most with Fahey’s original emphasis on celebrating autodidacts. In that sense, teaching himself guitar and, lately, pedal steel, is a way to offset his graduate degree in electronic music from Mills College.

Johnson works in a studio apartment in downtown Oakland. He lived there until about a year ago, when he moved in with his girlfriend, Marielle Jakobsons, another Mills alum (who plays violin on two Velvet Arc tracks). Now, the apartment is devoted to music: Mixing consoles, compression units, instruments, and a soldering station crowd the living room. There, he writes and records music for film and TV. Sometimes he consults with Bubbles, his girlfriend’s scruffy dachshund. His projects include the PBS show A Chef’s Life (the brisk fingerpicking at the start of each episode complements the host’s Southern pep) and the 2014 documentary Private Violence.

Often, ideas for scores find their way onto albums. Take one circuitous example: “Private Violence” — a woebegone dialogue between guitar and pedal steel from Blood Moon Boulder — was inspired by the documentary (which focused on domestic violence). And “Anamet,” from Velvet Arc, recapitulates the same melody on electric guitar, adding tidal cymbal swells and a walking synthesizer pattern.

A diffuse mélange of synth and pedal steel belies much of the acoustic instrumentation on Velvet Arc and Blood Moon Boulder. Steve Lowenthal, a Fahey expert and operator of the guitar-focused VDSQ label, detected the instruments seeping into Johnson’s recent work and requested that he bring them to the fore on a new record (which is currently untitled but slated for release later this year). Synthesizers were a focus of his at Mills, but Johnson is approaching pedal steel much like he once did guitar. “Any time I’m learning an instrument, I immediately want to put it to my own uses,” he said. “Even if that’s a perverted version of what the instrument is meant to do.”

“With pedal steel, there’s levers that you move with your knees and pedals and then you’re fingerpicking and using a bar — it’s like trying to do something expressive with a typewriter, that sort of machinery.” He went on, “Doing a record based on pedal steel was kind of a dare, but with the sound of it, I’m enthralled.”

In the studio, Johnson played me a selection of the forthcoming record. Suffused with tape decay, the pedal steel’s expected twang instead cedes to polished glisten and mingles with vibrant synth. It sounds gossamer and plush, dotingly textured like Brian Eno’s Apollo but with a bolder presence. Johnson and his yappy dachshund settled into a reverie. “I have three solo guitar records,” he said. “That’s a good number.”