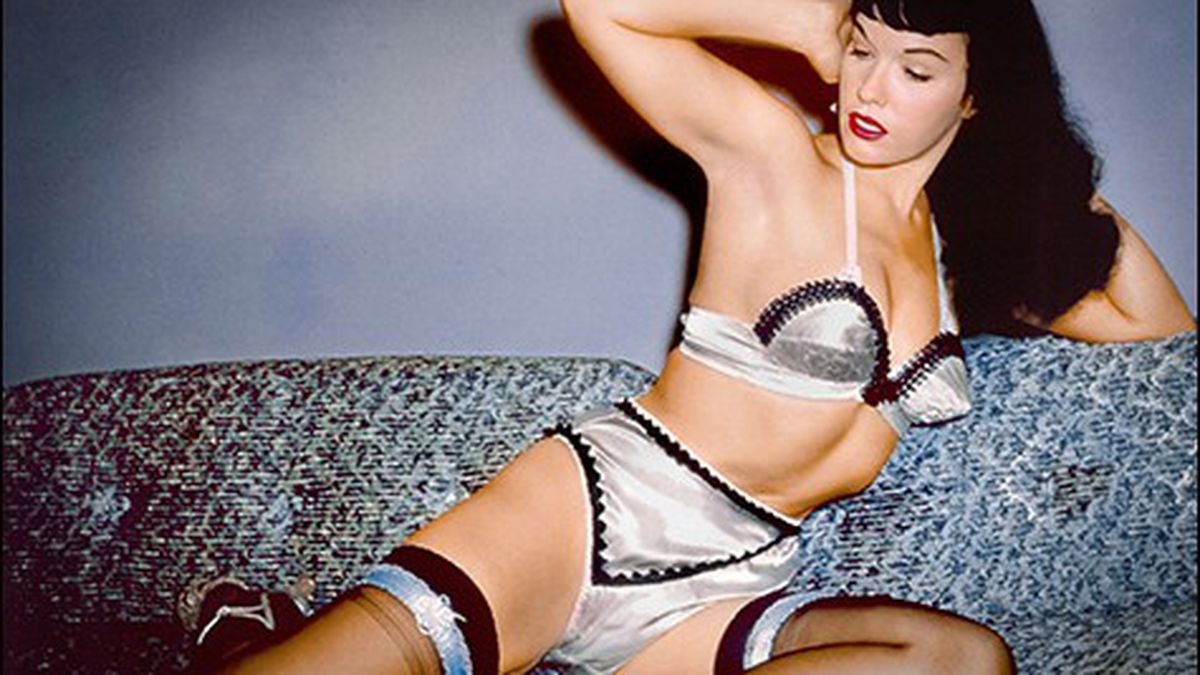 It’s in her eyes. They have that impish gleam of delight, so carnal and yet so fresh and unspoiled, as if the shy girl in the back of geometry class, her black hair carefully cut in bangs, suddenly reveals herself, one sultry summer night, to be this incredible tigress of love.

That, in a nutshell, is the appeal of Bettie Page, an American legend, arguably the most popular “pin-up girl” — what an odd phrase to use in the 21st century — of them all. Page’s swimsuit photos, the coy “nudie cutie” poses, and her remarkable bondage-and-discipline film-short series have aroused the imaginations — not to mention the nether regions — of generations of fans, male and female, since the 1950s. As a fantasy object of mid-20th-century desire she ranks with the likes of Marilyn Monroe and Ava Gardner, practically without speaking a line of dialogue.

But as with all great obsessions there’s a bit of mystery behind her. Who was she? Where did she go and what did she do after she retired from modeling in 1957, just as her sensational persona reached its first peak of popularity? What did she think about her present-day notoriety as a pop-culture idol? And what about those rumors of drugs and mental illness? Now, with Mark Mori’s documentary Bettie Page Reveals All, we’re finally getting the full story — we presume — in the form of a taped audio interview with Page made several years before her death in 2008, set to a cavalcade of eye-popping images.

Everybody loves Page these days, from Playboy‘s Hugh Hefner (“It’s very difficult to find a parallel to her, the combination of naughty and nice”) to photographer and ex-model Bunny Yeager (“It was hard for anyone to take a bad picture of Bettie”) to all the gals who show up at rockabilly gigs with black bangs and bright red lips. But it wasn’t always that way. Bettie Mae Page was born in Nashville, Tennessee in 1923, and spoke the rest of her life with an unmistakable Southern accent. Her family was poor and her father “touched her.” She spent time in an orphanage. After living for a while in San Francisco and flunking a Hollywood screen test she moved to New York, where she was rejected as a fashion model (“too hippy”).

Men flocked to her and she swung (and married) to her heart’s content, but Page had her standards: She didn’t drink or smoke, nor date anybody who did. Social commentators like Hefner view Page as a leading indicator in the country’s post-WWII shift from repressive Puritanism to a freer attitude toward sex, something she took for granted in her personal life. Later on, after she had retreated from the public eye to Florida and Southern California, she became a born-again Christian, was hospitalized for drug addiction, and underwent shock therapy.

None of that seemed to matter to such latter-day fans as artists Robert Blue and Dave Stevens, fashion designer Jean Paul Gaultier, and the Bettie Scouts, who searched for their idol in all the wrong places. Eventually, Page was able to gain some control over her image and finally make some money from her own face and figure while she was still living. (Forbes listed Page as one of the top ten posthumous celebrity money earners for 2012-2013.)

Page’s appeal lay in her pure, natural, sexual magnetism. “She lit up the place,” says one admirer, and she had many admirers. All director Mori and writer Doug Miller have to do is organize her narration, dig up a few unpublished photos, and line up the celebs — singer Beyoncé, stripper Dita Von Teese, model Naomi Campbell, et al — to sing her praises. Bettie Page Reveals All is a spanking good date movie, with the right date, of course.

Oakland Cops Say They Didn’t “Train” Their Guns on Child