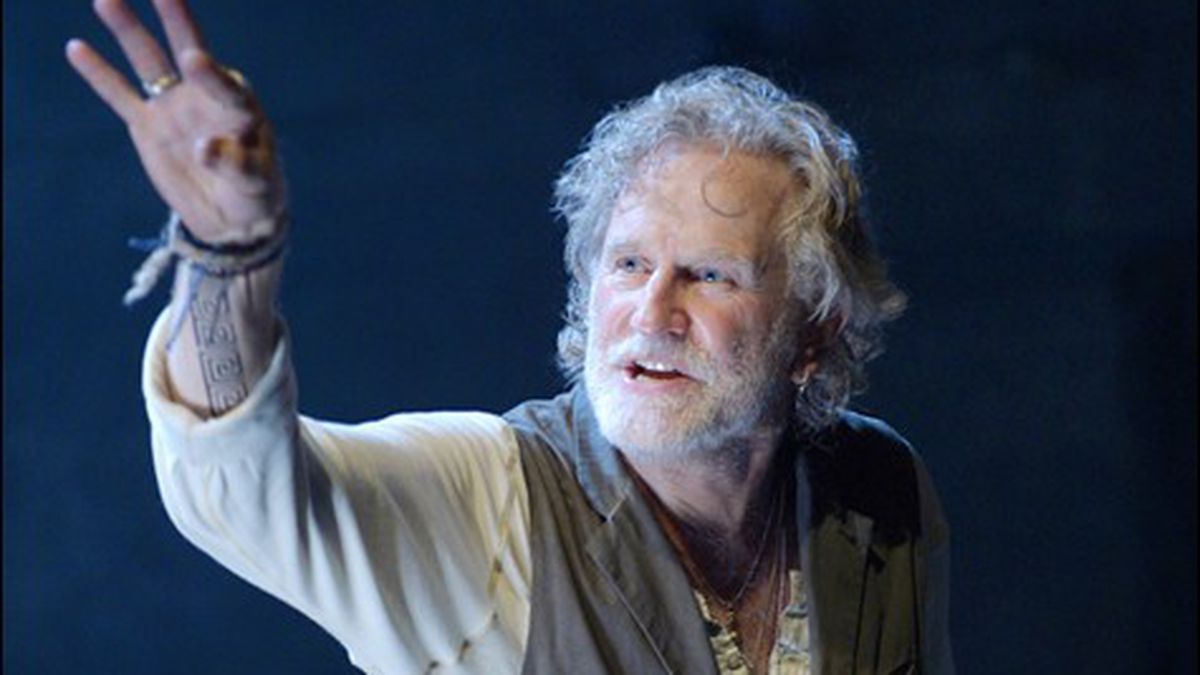 It's also a powerful reminder of the oral tradition.

Homer may have been the first to put ink to parchment and write down The Iliad, the epic account of the Trojan War. But the story, scholars have come to understand, is older than that. It is a story passed down in the oral tradition and, like any oral account, it changes with each telling. So An Iliad, which opened last week at Berkeley Rep, is an Iliad, but by no means the Iliad.

This is an Iliad told with urgency, with the purpose of getting its modern audience to care about what happened long ago and far away, because we share a common humanity. And because wars persist. This Iliad is a story of war, sprawling and personal, universal and tragically specific, told on a bare stage by one single voice.

Lisa Peterson’s and Denis O’Hare’s adaptation is a buttoned-down but poetic rendering of Homer’s epic. Here, it’s told by a grizzled storyteller — a poet who tells these legends as if he were reporting back from the battlefield. “Every time I sing this song, I hope it’s the last time,” he says as he prepares to start. The passing-down is his duty, and it takes a lot out of him.

Henry Woronicz is this American griot, charged with communicating these events in a way that will make us understand — really understand — what happened between Achilles and Hector, to make relevant the emotions behind the maneuvers of war. He hopes to make known the emotions of the kings, princes, warriors, their widows, and their parents.

Rachel Hauck’s minimalist set is a stark room that provides the bare bones of theater craft. This is an oral telling — the images will come from the words. The set could be a warehouse where old stories are stored. The walls are cement, there’s a janitorial closet with a sink, a bucket of mops, and a shelf with some paintbrushes and spray cleaners. A gray bearded poet arrives with an old suitcase and sits at a stark table with a bottle (whiskey?) and a glass. Stripped of the eye-catching accoutrements of theater where words are the scaffolding, the monologist weaves his epic drama from the basement of antiquity.

His words paint the backdrop — hundreds and hundreds of ships, thousands and thousands of men. He sees the enormity of scene, and over and over, he entreats us to see it. Do you see? Do you see? he asks. “This is what the war looks like.” With Woronicz’s powerful performance, we do, indeed, see it.

Under the artful direction of Peterson and her co-adapter O’Hare, the production includes a few more characters to fill in the picture: Brian Ellingsen is the poet’s muse, who takes his perch with an upright bass. His resonant music (original compositions by Mark Bennett) conjures the rage of Achilles, the intensity of the battlefield, and even helps the poet describe the serenity of the city of Troy — before it’s ravaged by war. It is a lovely place, full of citizenship and warmth and a community that meets to discuss a plan for a dying fig tree. As in Prokofiev’s Peter and the Wolf, different melodies, chordal qualities, and moods become a variety of personalities.

Peterson deftly employs a few more performers: shadows and sound. Floodlights on Woronicz cast daunting shadows behind him (courtesy of Scott Zielinski’s lighting design). These become mighty warriors and gods. The sonorous echo of the reverb on the mic is the voice of the gods. They speak their commands through the enhanced voice of the storyteller.

The simplicity of the production is elegant and masterful. But if war is hell, it is also tedious, and this monologue grows wearisome at points. The characters mentioned are many (gods, commanders, warriors, kings, princes, love interests, siblings, wives) and their long and complicated histories (ancestors, begettings, feuds) are hard to follow and at times, they are over-told. The old timer is long-winded.

And yet, his rambling yarns sometimes prove that there is a method to his digressions. The poet describes the scores of Trojan and Greek troops on the ships, soldiers who become American inductees: These young men are from Ohio farmlands; Springfield, Illinois; The Florida Panhandle; Brooklyn; Berkeley.

An Iliad is one of many Iliads, and shows that this war is one of many wars. In one dramatic rhetorical flourish, the poet captivates us with what at first seems like an indiscriminate tangent. Like Colombo, his discourse is a meandering jumble. And when his muddled thoughts stumble on a great truth, the effect can be jolting. The script effortlessly collapses the Trojan War with other wars, some of which are hazy artifacts from Mesopotamia, but the litany moves forward in time as he lists nearly every war in human history. Like a senile man who often loses his thread, the storyteller conflates then and now. Like an ancient man who has lived a thousand years, he knows it’s one and the same.

No Cannabis for the Sick and Dying