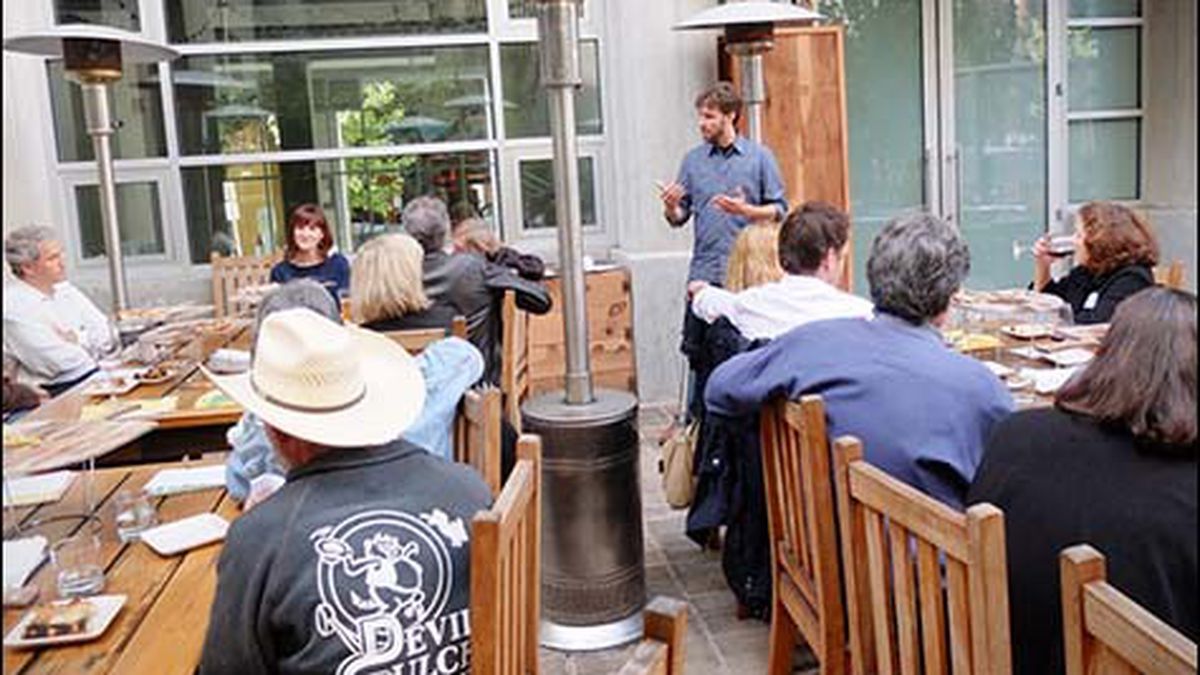 When Marissa LaMagna moved to Berkeley about fifteen years ago, she noticed a lot of empty storefronts in the downtown area. Slowly, she saw the area revitalize. “I watched this resurgence of downtown becoming an epicurean epicenter,” she said.

Having worked on farms in Vermont and Ohio when she was in her twenties, LaMagna had been a longtime advocate for the farm-to-table movement and was inspired by restaurants like Gather, whose owners are committed to locally sourcing their food. In 2008, she founded Bay Area Green Tours, which focuses on local green businesses, and collaborated with Gather’s owners on hosting a breakfast at their restaurant, followed by tours of farms from which the food came. In 2011, following the opening of more sustainability focused restaurants, LaMagna decided to start a small restaurant tour called the Moveable Feast, in which attendees could sample food at a few restaurants while talking with the chefs and learning about where their food comes from.

The next tour, organized to coincide with the Business Alliance for Local Living Economies conference (of which the Express is a sponsor), will take place on Tuesday, June 10. Participants will begin the evening with pizza, drinks, and Brazilian music at Gather Restaurant (2200 Oxford St.) and then move on to Revival Bar + Kitchen (2102 Shattuck Ave.), where executive chef Amy Murray will serve either local wild salmon or McFarland Springs trout with a spring vegetable hash made from Adirondack purple potatoes, spring onions, baby carrots, and fava leaves. The evening will end with a sampling of desserts including butterscotch pudding, crème brûlée, French cannelé, and chocolate strawberries at FIVE in the Hotel Shattuck Plaza (2086 Allston Way). Vegan and vegetarian options will be available as well.

Those three restaurants have always been featured in the tours, partly because of LaMagna’s friendships with the owners and chefs, but also because of their strong connections to the farms from which they source their food. “Gather has their own farm that they bring a lot of their produce from,” said LaMagna. “The chef at FIVE is close friends with a lot of the farmers he buys from, and Amy has been sourcing locally for twenty years.”

LaMagna’s goal is for participants to develop a connection with the people who grow and cook their food. “I have a deep appreciation and respect for people who grow my food,” she said. “I know how difficult it is and what a labor of love it is.” She also hopes to draw attention to the culinary scene in Berkeley’s downtown area. “There’s so much attention to the Gourmet Ghetto. Downtown Berkeley has had a bad reputation over the years,” she said. “But it’s become more alive and there’s a whole new energy there. It’s becoming more of a destination.”