Including a photo slideshow. 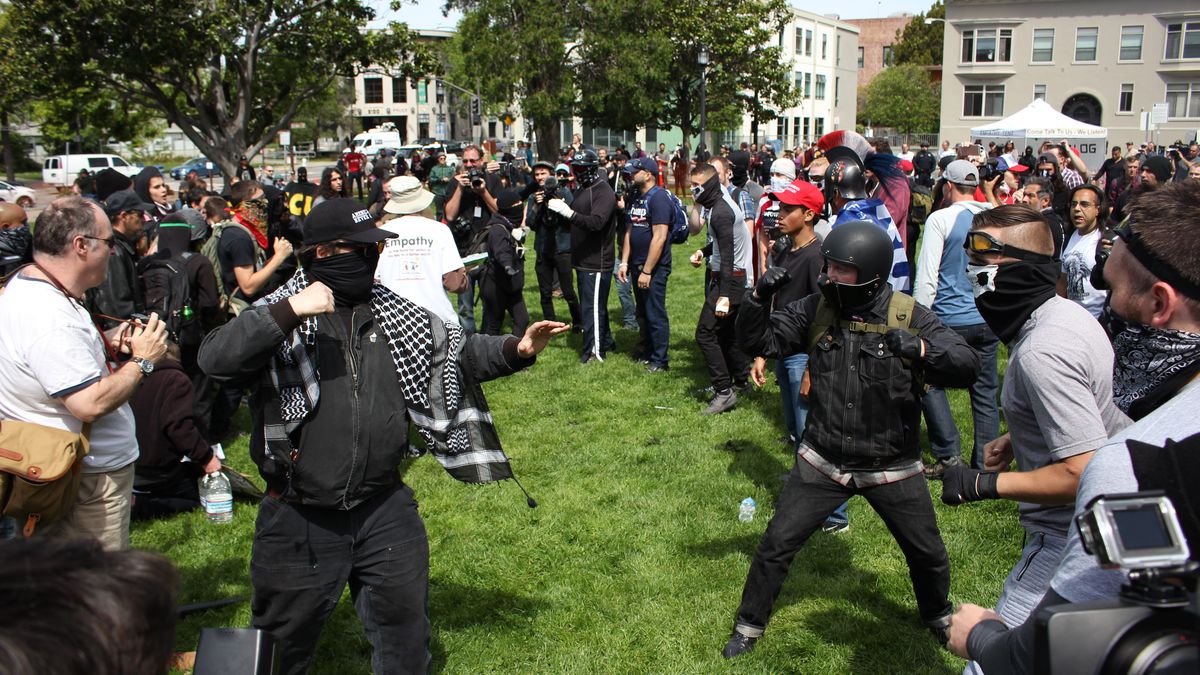 Even at 10 a.m. this past Saturday morning, hours before a throng of anti-fascists and Trump-supporting white nationalists overtook downtown Berkeley’s streets, it was clear that most of the attendees were less interested in speeches, protesting, and free speech — and were mostly there just to tee-off on each other.
[slideshow-1]Before the brawling began, officers stationed themselves at the entrances to downtown’s “Peace Park.” They searched bags and confiscated all sorts of items that could be used for fighting: a stun gun, shields, poles, sticks, knives, mace, bear spray. Even “weaponized Pepsi” — soda cans filled with concrete.

Other Berkeley cops wore helmets and brandished rubber-bullet guns and batons, with sets of strip ties in full view as they paced up and down a buffer zone created by orange mesh fencing on a strip of grass that separated the two main groups inside the park.

For the first hour, the affair was calm enough, so much so that a homeless man continued sleeping on a nearby bench. The two sides slung insults, held banners and signs, and shouted at one another from across the barricade.

AntiFa demonstrators, mostly clad in black with black masks covering their faces, chanted “No Trump, No KKK, No Fascist USA.” A Trump-supporting Oath Keeper dressed in full fatigues muttered that security shouldn’t tire themselves out. “It’s like bad children,” one man said into his walkie talkie. “You gotta sit ’em in the corner for a while.”

Around 11:15 a.m., someone in the crowd threw what would be the one of many flashbang grenades deployed throughout the day. The orange mesh fence was quickly trampled and a brawl broke out.

Over the next hour, as pro-Trump organizers (unsuccessfully) tried to wrangle participants to listen to speakers at the west end of the park, police attempted to keep the peace and reinstate the boundaries between the groups. Though they eventually got everyone back behind the fencing, projectiles were hurled from both sides—everything from bagels and oranges to large rocks, glass bottles, and cans.

By noon though, the AntiFa contingent spilled out of the park and onto the street as YG and Nipsey Hussle’s “FDT (Fuck Donald Trump)” anthem blasted through speakers in carts on bikes. Making their way around the perimeter of the park, they were soon met by Trump supporters and the militiamen who had signed on to provide security for the Trump event.

The opposing sides collided in the street, battling each other off and on with sticks, knives, and fists as police presence disappeared. Some in the crowd deployed pepper spray, smoke bombs, loud exploding devices, and fireworks. Along with chemical agents, participants and members of the media were also doused in purple glitter. Before long Dumpsters were rolled into the fray and trashcans, trump hats, and signs were lit on fire.

Both sides had medical volunteers, who tended to bloodied faces and washed out burning eyes as the fights continued. Despite the mayhem, not a single officer could be seen.

After nearly two hours of street fights near the park, the momentum shifted when the crack of a flashbang sounded, followed by another loud explosion that filled the air with smoke. The AntiFa demonstrators ran north toward Berkeley Square, with the alt-right supporters in pursuit.

AntiFa left dumpsters in the road, and tried to unsuccessfully block the streets with debris and construction fences. But, with “The Battle Hymn of the Republic” — a song associated with the American Civil War — blaring through a handheld speaker carried by a man leading the charge, the pro-Trump contingent burst through and flooded into the intersection.

The groups continued to spar in Downtown Berkeley in the midst of oncoming traffic and Saturday brunchers. Cars caught in the fray tried to drive through as hundreds filled the intersection at Shattuck and Center. Two bicycle cops finally closed the two northbound lanes but left southbound ones open for the next half hour, despite the continuing flow of demonstrators making their way toward the intersection.

Other than closing the intersection for traffic, Berkeley police didn’t actually intervene in the scuffle until much later, around 3:30pm. By then, the numbers had thinned and the crowd’s energy was waning. A few dozen officers, still clad in “riot gear” and accompanied by five motorcycles and two bicycle cops, surrounded the remaining brawlers. Seven cops then came through on foot asking people to leave the streets.

“We just want everyone to be safe,” one officer said, with a smile. When the streets were officially cleared, some Trump-supporters chanted “USA! USA!” celebrating their perceived victory.

Officer Byron White with the Berkeley Police Department declined to comment on its policing strategy at the event, but said that roughly 180 officers were working throughout the city. He also confirmed that reinforcements were provided from other law enforcement agencies, including Oakland Police Department, through Alameda County’s mutual aid program.

As of Sunday evening, 23 arrests had been made, including two who were arrested on warrants from the last violent Trump-Antifa on March 4. More arrests are expected as the police continue investigating video footage of the brawl. There were also eleven reported injuries, and seven people had to be taken to the hospital.

The statement also emphasized that Berkeley Police “and the City as a whole worked to protect people’s right to free speech and simultaneously keep people safe,” a sentiment reiterated by Officer White. Still, police were virtually absent for hours throughout what’s now being called “The Battle of Berkeley.”

Berkeley police also drew harsh criticism after little was done to prevent violence during both the large protest against former Breitbart editor Milo Yiannopoulos, in February, and at the last pro-Trump rally in March.

Critics pointed out that the Berkeley police strategy with the Trump-AntiFa brawls has been very different from those used during 2014’s Black Lives Matter protests, when demonstrators were hit with heavy force that, in one night, included roughly 50 teargas grenades to disperse the crowd.

Officer White responded to questions about the change in strategy by saying that protests couldn’t be compared. He repeated that the officers’ goal was to keep the opposing rallies from interacting inside the park.

“When they went outside of that area, now you are talking about a group that is potentially armed,” he explained. “It creates a challenge when that group then goes outside that area, because now you are dealing with an armed group which is going to require a greater level of force for officers to control.”

Next ArticleDenzel Curry & GoldLink at the Regency Ballroom