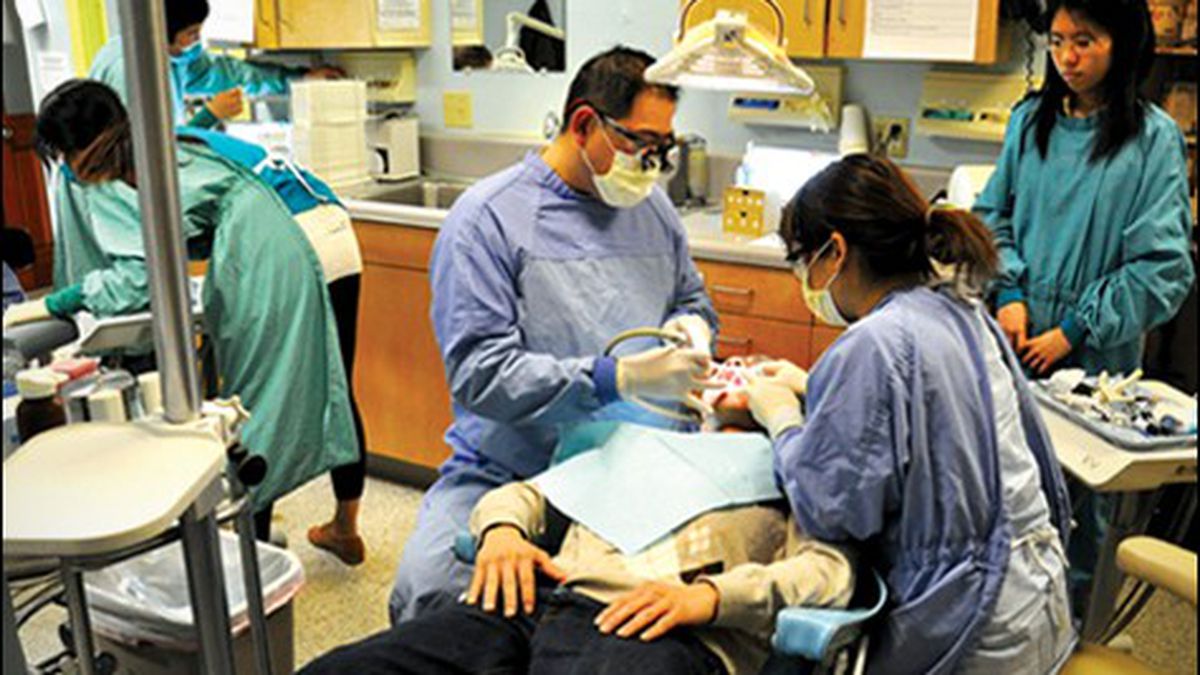 The forty-one-year-old institution has less money and more patients as the city and state slash healthcare spending.

The Berkeley Free Clinic is stretched to its maximum. The venerable institution, which provides health care for the poor, the underinsured, and the undocumented, recently saw a substantial portion of its funding slashed. At the same time, more people are turning to the clinic for help due to city and state health-care service cuts. The clinic has become so overwhelmed at times that its medical section has had to turn people away.

Overall, the clinic’s budget is rather small, considering all the services it provides. It receives about $360,000 annually from private and corporate donations, grants, and government contracts. The free clinic’s finances also suffered a significant blow when it recently lost funding from three sources: $120,000 from the state for medical, dental, and hepatitis services; $65,000 in state HIV funding, counseling, and testing; and $25,000 of laboratory support from the City of Berkeley.

At the same time, a growing number of people are arriving on the clinic’s doorstep. Last year, there was an increase of 200 clients at the sexually transmitted disease clinic. Part of the influx was caused by the city slashing its STD services, said Scott Carroll, who recently stepped down as the clinic’s funding coordinator.

The clinic’s medical section has been particularly hard hit. It treats uncomplicated conditions, including upper respiratory diseases, sore throats, skin problems, women’s urinary tract infections, and minor burns. The crush of new patients has forced the medical section to turn away about ten people a day.

The free clinic also is getting more calls from undocumented people, who find it increasingly difficult to obtain health care. “That’s especially true in Contra Costa County, where a lot of services have been cut off for undocumented” people, Carroll said.

Even the Veteran’s Administration is sending vets to the clinic — for dental care. But the clinic’s dental program is impacted, too. It can take only one or two new patients each month — including the vets — chosen by lottery from the 35 to 40 people who sign up.

Yet despite the difficult challenges, the 41-year-old clinic has managed to stay afloat thanks to its medically trained volunteers and some savings in the bank, Carroll said. “Unlike other clinics, we’re not paying people to provide our services, so we’re fortunate that we can shift things around,” he said, speaking in the clinic offices, located in the basement of the south-campus Trinity United Methodist Church.

Most clinics wouldn’t be able to move funds from salaries to building maintenance or medical equipment as the free clinic has done. In addition, HIV-Prevention Coordinators Alexis Wielunski and Kevin Lee, both salaried employees through last June, agreed to forgo their pay to help get the clinic through rough economic times. Wielunski, a graduate student in public health at San Jose State University, said the trade-off is her satisfaction in being able to work where clients are treated “in a respectful and nonjudgmental way.”

She explained how, when testing for HIV, the clinic doesn’t simply focus on giving the test and then hustling clients out the door. Instead, counseling is an integral part of the process, whether the person is HIV positive or negative, in order to help clients understand “what it is that’s putting them at risk for HIV and supporting them to make a plan to reduce that risk,” Wielunski said. “It’s really an empowerment process. I think that makes us a little bit different.”

Carroll said just a handful of clinic coordinators are paid and none receive more than $1,500 per month. Only about one-fourth of the clinic’s budget goes to salaries. By contrast, the City of Berkeley’s three top health department managers collectively earn more than $360,000 a year, plus benefits.

But the clinic’s pay scale also has drawbacks. For example, while employed at the free clinic, Carroll simultaneously worked part-time for the San Francisco Health Department. “People have to dedicate a good chunk of their time outside the clinic to support themselves,” he noted.

Still, for volunteers, the clinic can be a pathway to a professional health career. That’s the case for Carroll, who began at the clinic a number of years ago by volunteering at the Gay Men’s Health Collective, which provides STD testing, treatment and counseling, geared especially to gay men. People who come to this clinic may not want to reveal their sexual orientation or their medical status to their personal physicians, Carroll said.

Carroll went on to do similar work in Washington, DC, and in various Latin American countries, before returning to the Bay Area to get his master’s degree in public health and to return to work at the free clinic. Now, Carroll is about to leave for Guatemala to start a gay men’s health clinic there, under the auspices of the Centers for Disease Control and Prevention. “Hopefully on a decent salary this time,” he said. “As a volunteer and a gay community member, at first I just thought this would be a neat place to get involved with my community, but it has completely redirected where I was headed in life, and given me opportunities that I never would have gotten anywhere else.”

As for keeping salaries low — or nonexistent — it’s a decision that’s isn’t made lightly at the clinic. Recently, the board had to decide whether to continue paying two of its coordinators. “We had a very long discussion a couple of months ago about is it okay for us not to support these people?” Carroll said. “A lot of the discussion focused on the question of keeping the clinic running. If we just don’t have the money, client services come first.” This time, they decided to dip into reserves to pay the salaries, but the clinic’s savings, Carroll noted, “are not going to last forever.”