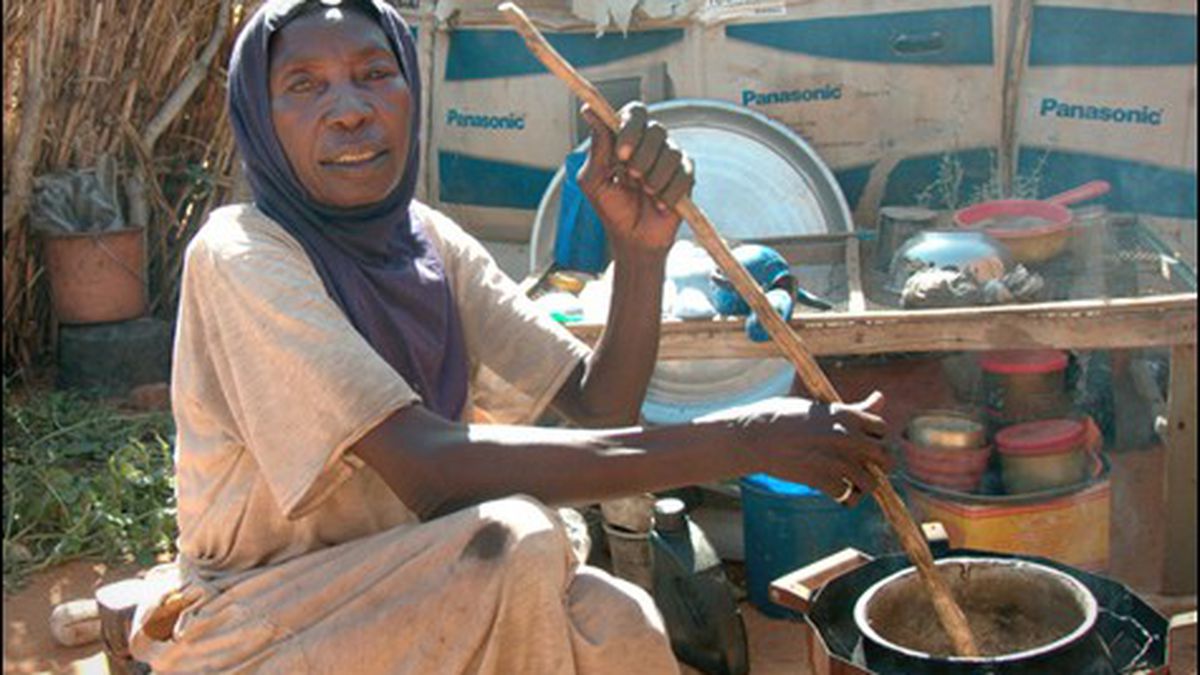 A fuel-efficient cook stove means Darfuri women won't have to search for firewood — a trip that often exposes them to sexual assault.

The teeming Zam Zam camp in North Darfur is home to 200,000 refugees fleeing the civil war in Sudan. Women in the camps cook over open fires and then walk for miles through dust and desolation to search for firewood, often finding only a single tree to chop down. Every wood-collecting trip also exposes women to rape by Sudanese militiamen — the Janjaweed. And if there’s a man to go in a woman’s stead, he faces near-certain death. So the Darfuri women must choose between violence or selling their small sums of international food aid for firewood.

It’s easy to see these women as victims in need of charity, but Ashok Gadgil, an India-born physicist who settled in El Cerrito, had a different vision. The women of Darfur, he thought, deserved better cooking technology. So he not only worked with the women to develop a better stove, he also created a local market for it.

Gadgil’s career is built on creating devices that save lives and solve health problems. As a child in India, he witnessed the deaths of his infant cousins from water-borne disease. That experience planted the seeds for the efficient and affordable UV water filter that Gadgil invented at Lawrence Berkeley National Laboratory in the 1990s. His projects are driven by his conviction that he won’t sit idly by when he can apply his scientific training to reduce suffering.

Aware of Gadgil’s history of solving problems in the developing world, the US Agency for International Development requested his help in 2005. Gadgil assembled a team at Lawrence Berkeley Lab to design an inexpensive wood-fired stove that would reduce fuel-gathering trips and firewood costs for Darfuri women. The cookstove curbed assaults, saved money, and made the homes of thousands of refugees healthier, while reducing carbon emissions.

To design a product that Darfuri women would use, Gadgil sat on the floors of Darfuri kitchens and asked women for cooking lessons. Then he figured out what some of the best engineering talent in the world could do to help. “We know so much science and engineering here in the First World that we can certainly be of great use in eliminating some of the dire problems of people in developing countries,” said Gadgil, 62. “How can we say at the end of the day that we made the world a little better?”

More than 3 billion people cook over open flames, so cook stoves are a hot idea in the world of humanitarian aid. Stoves often fall into two categories: locally produced mud stoves or metal stoves mass-manufactured in China. Mass-produced stoves did not suit the round-bottomed pots of Darfur, the cooking methods of the women, or the windy conditions in the camps. Mud stoves create local jobs, but they do not last very long.

Ken Chow, a Lawrence Berkeley Lab engineer who volunteered his time on many versions of Gadgil’s stove, said the team wanted a design that was precision engineered, customized, and suitable for local assembly, but could be produced en masse. “We wanted to have a big impact rather than a small impact,” said Chow, a Moraga resident who designs large-scale machines for science experiments. Chow also directed a volunteer team from Engineers Without Borders-San Francisco Professionals that developed early versions of the stove.

The “Berkeley-Darfur stove,” as it is known, is in the hands of 20,000 Darfuri women. Now in its fourteenth iteration, the stove began with a fuel-efficient model manufactured in India. It was redesigned and tested at Lawrence Berkeley Lab, and modified again and again with feedback from Darfuri women. “It has evolved by listening more and more and making changes to the design,” Gadgil said. “Now it is a stable design; it is a mature design.”

The stove uses as little as four times less wood than an open fire and looks like a twelve-sided chimney, with feet and wooden handles, made from folded silvery sheet metal. It’s fabricated in Mumbai, India, and shipped to Darfur in Ikea-like flat packs, where it’s riveted together by a dozen local men and women.

The Darfur Stoves Project, a Berkeley-based nonprofit that spun out of the lab’s work, partners with the international relief organization Oxfam America and its Sudanese partner, the nonprofit Sustainable Action Group, to organize stove assembly and distribution. With many of their engineering and supply-chain challenges behind them, the project has been measuring the stove’s impact. About 80 percent of women surveyed in the Zam Zam camp no longer collect firewood, but buy it instead. Those families once used a third of their incomes for firewood. But once they received Berkeley-Darfur stoves, firewood made up only 17 percent of their total purchases. “When you add it up across all of the women that we’ve provided stoves to over the years, it’s millions of dollars that they’ve saved,” said project Executive Director Andree Sosler.

Thanks to years of cooking-efficiency tests at the lab, the stoves also save women time because they boil water and heat food so much faster than open fires. The women have dubbed it Kannur Khamsa Dagaig in Arabic — the Five-Minute Stove. Hawa Abakar, a stove recipient from the town of El Fasher, said in a statement to the Darfur Stoves Project that her stove helps her find other work: “Because I can cook my family’s breakfast more quickly, I leave home earlier each morning in search of work, and I have more success finding a job for the day.”

Gadgil said the 20,000 stoves in use are just a start because the Sudanese civil war has displaced 400,000 families. The stoves, produced for $20 each, have cost the Darfur Stoves Project and their partners about $1 million, but if Darfuri families use their stoves for five years, about $32 million could be saved by stove owners, the organization says. Still, the project’s long-term survival depends on partnerships with other groups and donations to the project’s website, http://darfurstoves.org. To make the stoves self-sustaining, the project is now shaking up the traditional model of humanitarian work by treating Darfuri women as consumers. Each stove saves a family at least $1,500 in fuel expenses over the five-year lifetime of the stove, making it financially possible for women to rent a stove, or purchase one in a lump sum or installments. According to Sosler, even when women have to purchase a stove, there’s still more money for food, clothing, and sending kids to school.

In October, the project began a pilot market study with women outside the camps, who have more income than refugees. Sosler said creating a market for the stoves will provide even more feedback on the technology and will make the stoves even better, to say nothing of getting them in more people’s hands. “Selling something creates a market signal that is another way to verify that what you’re doing is helping people,” she said. “It’s clear that women love the stove and are using the stove, but there’s that extra bit of confirmation when they’re buying it.”

Within a few days, five hundred stoves were sold, and women have been putting in orders for more with a local saleswoman. “The whole idea of seeing women as consumers and making a product for them as an entrepreneur in Silicon Valley would,” Sosler said, “was baked into Ashok’s approach the whole time.”

This Note’s for Who?

Best Place to Smoke in Public