The members of Bells Atlas apply their formal musical training to beguiling pop on their latest EP, Hyperlust. 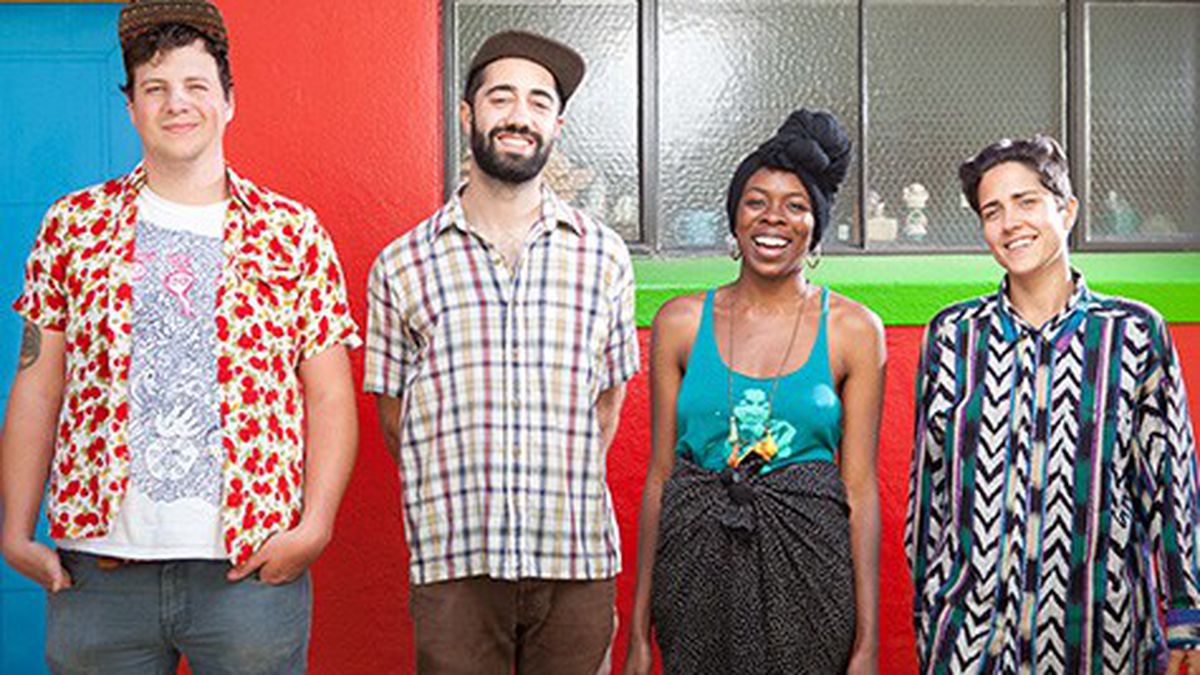 Bells Atlas’ new EP, Hyperlust, fuses high-caliber musicianship to bright, glistening pop. Though the song structures are digestible and familiar, the arrangements are multi-layered and expansive, and there’s an iridescent quality to the way each song effortlessly shifts melodies and tempos, like light refracted by a glass prism: keys shimmer, percussion twinkles, bass lines bounce, and the soulful vocals glide throughout with impressive range. Unsurprisingly, all four members of the Oakland band have degrees in music. And yet, they met not through jazz ensembles or master workshops, but serendipitously at a North Berkeley coffee shop, Guerrilla Cafe.

In 2009, the band’s lead vocalist, Sandra Lawson-Ndu, met bassist and keyboardist Doug Stuart while she was working at the cafe. He’d recently moved to the East Bay after graduating from the jazz studies program at the University of Michigan. The pair chatted about music whenever Stuart came in for coffee and eventually started playing together for fun. Stuart recruited fellow University of Michigan jazz alum, guitarist Derek Barber, to collaborate. And then, drummer Geneva Harrison, a recent graduate of the University of Miami’s Frost School of Music, got a barista job at Guerrilla Cafe too. At the encouragement of the cafe’s co-owner, Andrea Ali, whom the band members describe as their musical matchmaker, the four new friends formed Bells Atlas.

Lawson-Ndu and Harrison credit Ali as their first major supporter, citing her flexibility in the workplace as one of the catalysts for their creative growth. “We’d come into work sometimes and she’d be like, ‘I got a new idea for a photo shoot: Sandra’s in a gold bikini and the rest of you are wearing white suits and holding her,'” recalled Lawson-Ndu when I met the band, fittingly, over morning coffee and pastries.

While the gold bikini shoot never happened, Ali correctly intuited Bells Atlas’ compatibility. A favorite in the local indie rock scene, Bells Atlas is beginning to receive national recognition. The streaming site Bandcamp recently featured Bells Atlas in an Oakland-focused compilation and Rookie, the widely read, feminist online magazine for teenage girls, published an interview with Harrison and Lawson-Ndu last month. The group boasts a full-length album and two EPs, and frequently plays at major venues, such as The New Parish in downtown Oakland and The Independent in San Francisco, as well as various festivals and shows up and down the coast.

On Hyperlust, self-released this past June, Lawson-Ndu, Harrison, Stuart, and Barber’s skilled musicianship is bold and apparent, but no single player gets overpowered by another. Despite its complexity, the music never sounds overwrought. It’s light, playful, and doesn’t make a show of the laborious technical training at its core. Early on, though, ensuring that sort of accessible ensemble feel was challenging. Freshly emerged from formal musical training, the band members made a conscious effort to simplify their songs and appeal to audiences outside of academia.

“When you’re in college, you want to play all the hardest things, but when you get out of school, you’re like, ‘Oh, no one wants to listen to this twelve-minute auxiliary percussion piece except for kids in school,'” observed Harrison self-mockingly.

While the internet has played a large role in Bells Atlas’ success (the group has never worked with a label), the band’s songwriting process is all about the chemistry that occurs when four players are in one room. Each track is born from a collaborative process that often starts off as freeform improvisation. As a song evolves, the band members critique each other’s parts and help one another make fine-tuned adjustments. Though they described the process as somewhat tedious, Lawson-Ndu, Stuart, Harrison, and Barber enthusiastically agreed that giving equal weight to each person’s input helps them arrive at the best possible final product.

“Then we perform [the song] and refine it some more, usually,” said Barber.

The only part of Bells Atlas’ music that’s created in solitude is Lawson-Ndu’s lyrics, of which she is the sole author on most tracks. On the microphone, she treats her voice more like a melodic instrument than a vehicle for conveying narratives. Her exact words are often difficult to decipher. The content is secondary to the moods, such as when her voice dances around Barber’s warbling guitar notes on “Bling,” or alternately coos and howls on “Sugar for the Queen.”

Bells Atlas is immersed in Oakland’s indie rock community as a part of non.market, the loose collective of local bands that cross-promote and support one another. Other members of the collective include The Seshen, which shares Bells Atlas’ penchant for maximalist instrumentation, as well as Barber’s other band, Astronauts, Etc. and the environmentalist pop quartet Trails and Ways.

But though its sound overlaps with these other groups, Bells Atlas’ incorporation of jazz and soul elements makes the band a somewhat unexpected complement to hip-hop acts, such as Queens D.Light, whose roots are comparable. On Friday, Bells Atlas is scheduled to open for Boots Riley’s legendary political rap group, The Coup, at the New Parish (1741 San Pablo Ave., Oakland).

This versatility has enabled Bells Atlas to transcend the indie rock scene and garner supporters with a wide variety of musical tastes. Still, eclecticism has drawbacks for an unsigned band in charge of its own promotion. Often, the band members find themselves stumped when asked to describe the genre of their music. “It’s great to be able to hop on a bill and know you will have some overlap with the other bands,” said Stuart. “But when it comes to marketing yourself to people who don’t know you, it makes it a little bit difficult.”

“Like, remember that cowboy from that Tumbleweed Wanderers show?” asked Harrison, turning to the rest of the band. “He was like, ‘I don’t get it but I like it.'”