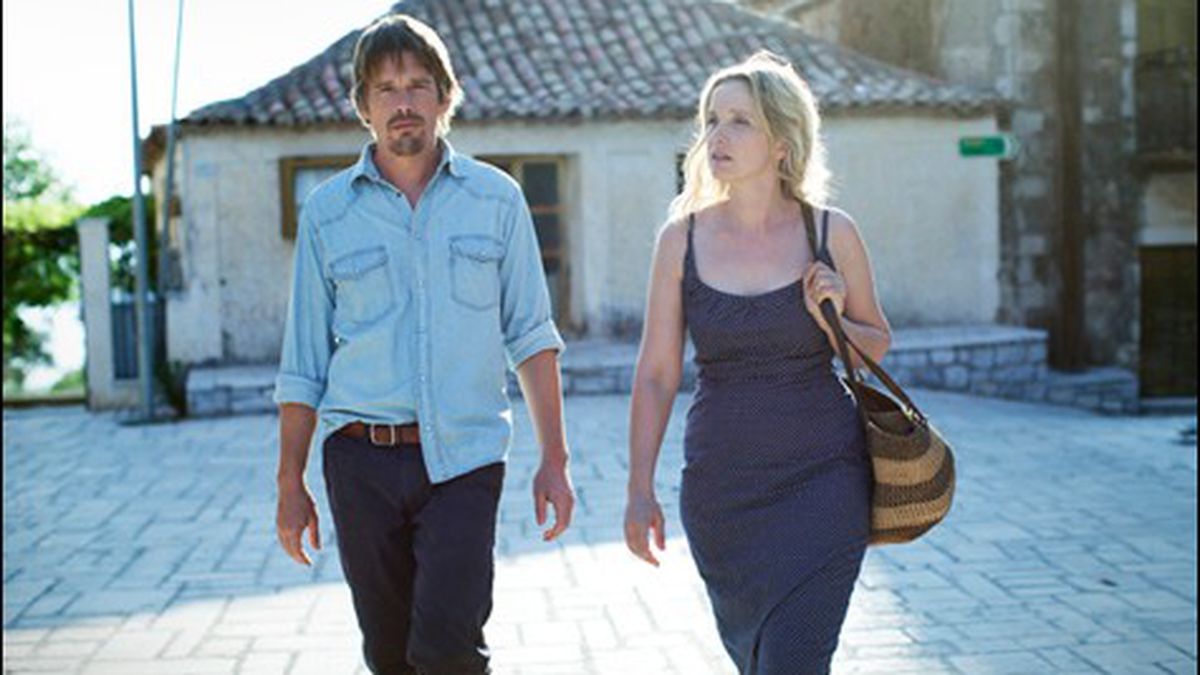 We’ll admit it, the prospect of Before Midnight, the third chapter of the Richard Linklater/Julie Delpy/Ethan Hawke romantic light-drama series that began with Before Sunrise in 1995, did not exactly provoke a warm tingle of anticipation beforehand.

Oh, we were suitably captivated by the carefree effervescence of Celine (Delpy) and Jesse (Hawke) in Before Sunrise, and the way their chance meeting on a train to Vienna led to a night of shared confidences and the first sparks of love just before they parted and went their separate ways. Linklater, the restless filmmaker who would give us Bernie, A Scanner Darkly, and Fast Food Nation in addition to Slacker and Dazed and Confused, was clearly paying homage to the cinema of Eric Rohmer. Celine and Jesse’s sleepless all-night talkathon had the same flavor as one of Rohmer’s dialogue-heavy character studies. Specifically, it echoed that elusive moment when the conversation crescendos and the world pauses for a character, offering up her- or himself for approval or rejection with everything hanging in the balance.

That’s usually a young person’s game, and so we were surprised when the sequel came along. Before Sunset (2004) picks up the same two seekers nine years later, as novelist Jesse and environmentalist Celine, both thirtyish, reunite in Paris and resume their deferred love affair. The bittersweet taste is irresistible. So, evidently, was the impulse to follow the two lovers further. The Before series was beginning to resemble a romanticized miniature narrative version of Michael Apted’s Up documentaries, a steady onslaught of updates, with the characters’ youthful innocence giving way to disillusion or worse as they age. Rohmer had the good sense to move on to a new, forever-young set of protagonists with each new film. Linklater/Delpy/Hawke, on the other hand, opt for the long-haul ticket with no substitutions allowed.

Before Midnight finds the pair on strange ground indeed: pushing middle age, tending their offspring, navigating the twists and turns of a long-term relationship. Jesse, whose novels are successful, is attending a writer’s retreat in the picturesque countryside around Messinia, Greece, with Celine and their young twin daughters. As the film begins, Jesse is seeing off his teenage son from a previous relationship, Hank (Seamus Davey-Fitzpatrick), at the airport. Father and son have a hard time relating to each other, a theme the screenplay — written collectively by the director and his two stars, based on characters created by Linklater and Kim Krizan — dwells upon. It’s the topic of the day.

We brace ourselves for 108 minutes of civilized, literate, domestic sniping, the Woody Allen curse. And our lovers certainly deliver the old-married-couple badinage, salted with “end-of-the-world” philosophical musings around the dinner table with their Greek friends and Jesse’s horny-hubby come-ons to Celine. But gradually the movie gains traction. Delpy goes into a wonderful mock-bimbo routine for the chastisement of Hawke’s Jesse, and then we remember why this mini-franchise enthralled us in the first place. She’s wonderful, and he’s not that far behind. We really want to believe these two people love each other. Their magic-hour strolls through ancient ruins help set the mood, but in the end Celine and Jesse are quite capable of rationalizing their mutual affection obliquely, by letting their emotions run free. She’s more likable, but he has an appealing neediness.

Self-esteem wrangles are at the center of it, a specialty of Linklater. The improvised-sounding dialogue is itself a product of diligent riffing by the L-D-H trio, with a much more specific goal in mind, it seems, than the original film. Celine and Jesse’s “time machine” musings, in a coda after the couple’s climactic showdown in a hotel room, state it obviously — they intend to see it all the way through no matter what. And we’re happy to go along for the ride.