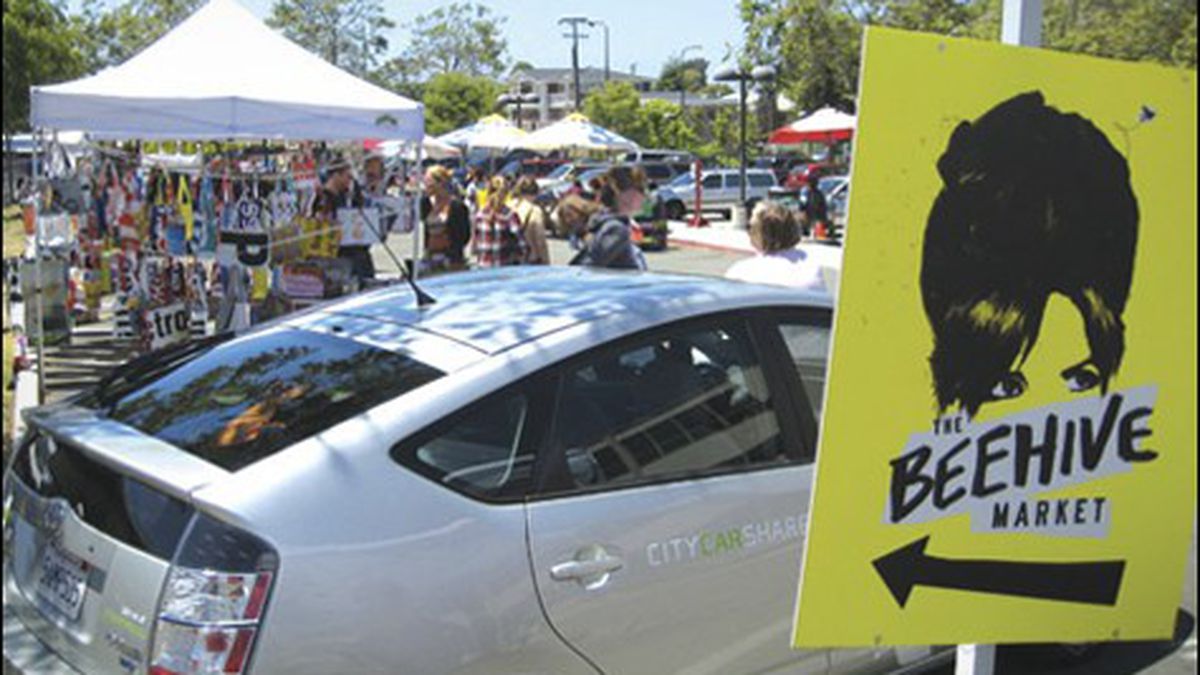 The green-lifestyle market has enjoyed a promising launch in West Berkeley, but an uncertain road lies ahead.

Sometimes, when you miss that magic moment, you never get another chance. Isaac Cronin and Julia Fry knew that if they didn’t start their dream green-lifestyle market during the summer, it’d never take. And though they only had two months to build it from the ground up, they knew that if they didn’t do it this summer, they probably never would. So, on a Saturday afternoon in mid-June, in a prominent, spacious West Berkeley parking lot, the Beehive Market was born.

“This is not just a summer romance,” said Cronin, who has a background in both the food industry and green-sector PR. “We’re going forward, to make this an institution.” Ten weeks in, results have been modest, yet promising. Attendance at the market — which is held every Saturday from 10 a.m. to 2 p.m. — has trended up, reaching a weekly average of about 1,500. But Cronin and business partner Fry, who until recently owned a botanical laundry detergent company, hope to eventually see twice that.

Vendors have responded, too, with forty to fifty coming every week — although there’s room for 100. Sales have been mediocre for some, hot for others. With its blend of local crafts, artisan goods, prepared foods, home and garden resources, fresh produce, and live music — all vetted for local, sustainable production — the Beehive is on its way to cementing a unique identify. Still, achieving institutional status and attracting thousands of weekly regulars in a city that’s already home to three popular farmers’ markets isn’t likely to be easy.

One market has already failed in the same spot the Beehive Market calls home. In 1997, Berkeley’s Ecology Center — which now successfully operates farmers’ markets in North Berkeley, South Berkeley, and downtown — attempted to launch a West Berkeley market in the Berkeley Adult School parking lot at 1701 San Pablo Avenue. A little more than two years later, it was gone.

Starting a new market is never easy, said Ecology Center program manager Ben Feldman, who’s responsible for all three of Berkeley’s markets. West Berkeley wasn’t the Ecology Center’s only failure; it also tried to establish a market on Telegraph Avenue near the UC Berkeley campus beginning in 1993, but folded it after three years. “The first couple years of a market, even one that’s a good market, it’s still kind of a struggle to make it work,” he said. “It does take a surprising amount of time to get those things up and running and established, and profitable.”

Feldman estimates that it can take as long as five years for a market to hit its stride. The North Berkeley market, now six years old, is “still somewhat finding its identity,” he said. It’s also growing faster than the city’s other two markets, both of which are more than twenty years old and considered mature. Combined, the three saw an 18 percent increase in attendance between 2005 and 2009, which Feldman attributes to a spike in interest in local, sustainable, and organic food.

There’s no doubt that it’s a good time for farmers’ markets. This summer, Emeryville and Oakland have also seen new markets open. Kensington’s market has expanded, and Albany’s is on the way. Ron Pardini, founder and executive director of Urban Village Farmers’ Market Association, which operates eleven Bay Area markets including three in Oakland, believes the right market in the right place can be an immediate success.

“If you bring them the right product, it’s going to become a ritual in their life,” Pardini said. “It gets to be a social gathering.” While the Ecology Center’s markets give precedence to produce, Urban Village’s tend toward a model closer to Beehive’s, where arts and crafts, clothing, and prepared food make for more of a community event than a grocery errand. These extra touches, he said, encourage people to slow down and interact with one another. That’s exactly what Cronin hopes to achieve at the Beehive Market. So far, it seems to be working.

“It’s been very sociable. Berkeley crowds are always very interesting to talk to,” said Jenny Hurth, who’s sold her reusable bags made of recycled vinyl signs at Beehive since week one. “People will stop by and chat for a very long time because it’s on a weekend and it’s leisurely. … All the neighborhood people who stop by are very happy to have us there.” Sales have been modest, but she’s confident they will pick up. Lacking a retail space, she can use the market as a regular outlet for her product. Being local, sustainable, and a tad quirky, her bags fit right in with other goods for sale, including auto tires converted into planters and thrift-shop T-shirts flipped inside out and screen-printed with the Beehive logo.

Still, practical challenges persist. Cronin says he’s currently tasked with attracting arts and crafts vendors who already have a retail presence, retaining them during the winter months, and finding vendors to offer bulk household disposables such as soap and detergent. He assumes these issues will gradually sort themselves out. Customers, meanwhile, seem more concerned with the vibe. “It’s a whole philosophy,” said Albany’s Anthony Chiang between bites of a food-cart lunch while music by indie-rock band Felsen floated past. “It’s all here, in one place.”