For the past few years, diners at meat-focused restaurants in the Bay Area have have seen offal cuts (organs and other so-called “nasty bits”) slowly enter the mainstream — a multiplicity of snouts and jowls and trotters and hearts. Now, with the launch of Offal Wonderful, a week-long promotional campaign celebrating “the fabulousness of the inside of every animal” that will run from September 23-29, it’s official: Offal is most definitely in.

Offal Wonderful is the brainchild of Olivia Tincani, a food and farming consultant and the communications director for Llano Seco Organic Pork, the Chico-based ranch that is co-sponsoring the event (along with Eat Real Festival and The Butcher’s Guild). Tincani explained that the biggest issue for any small- to mid-scale rancher is full-animal utilization. “You’re always trying to maximize all of the time and energy you put into each animal,” she said.

Because the average customer is mostly only interested in the middle sections of a pig or cow, it’s incumbent on butcher shops and sustainability-minded restaurants (especially those that work with whole animals) to generate interest in the less popular — but often equally delicious — parts. It’s the only way those businesses can be financially sustainable, Tincani said. 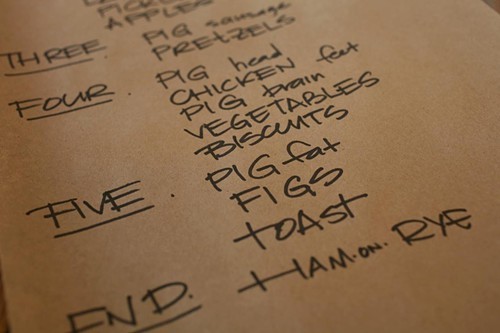 Offal Wonderful’s mission is to shine a spotlight on these underappreciated bits. The campaign kicks off today, as several Bay Area restaurants and butcher shops will highlight offal cuts on their menus over the course of the week. East Bay participants include Berkeley’s Cafe Rouge (1782 Fourth Street) and Local Butcher Shop (1600 Shattuck Avenue), Oakland’s FuseBOX (2311A Magnolia Street) and Hopscotch (1915 San Pablo Avenue), and Benchmark Pizzeria in Kensington (1568 Oak View Avenue).

Featured dishes include a pig’s ear terrine and tête de cochon (head cheese) at Hopscotch, a grilled pork jowl skewer at FuseBOX, and a Florentine-style braised beef tripe and a head cheese at Benchmark. Local Butcher Shop will carry a wide array of both prepared and raw offal products, including scrapple; guanciale; and fresh pig’s heads, kidneys, hearts, jowls, ears, and snouts. Availability will vary over the course of the week, so you might want to call the restaurants in advance to see what offal-based specials are on the menu each night.

Offal Wonderful will also run in parallel with this weekend’s Eat Real Festival, which will have a number of offal-focused events on its itinerary. Several of the chef demos will feature offal cuts; for instance, Hopscotch’s Kyle Itani will be cooking turkey neck, and Pizzaiolo’s Charlie Hallowell will make a chicken liver pate. And this year’s edition of the ever-popular whole hog butchery demonstration will, for the first time, include the pig’s head, as well as a selection of its organ meats.

The promotional campaign will wrap up by playing a role at this year’s Butcher’s Guild Conference (which What the Fork covered last year), a gathering of sustainability-focused butchers that will take place in San Francisco from September 30 to October 2. This year’s curriculum will include specific strategies for how to process and, just as importantly, how to market offal cuts.