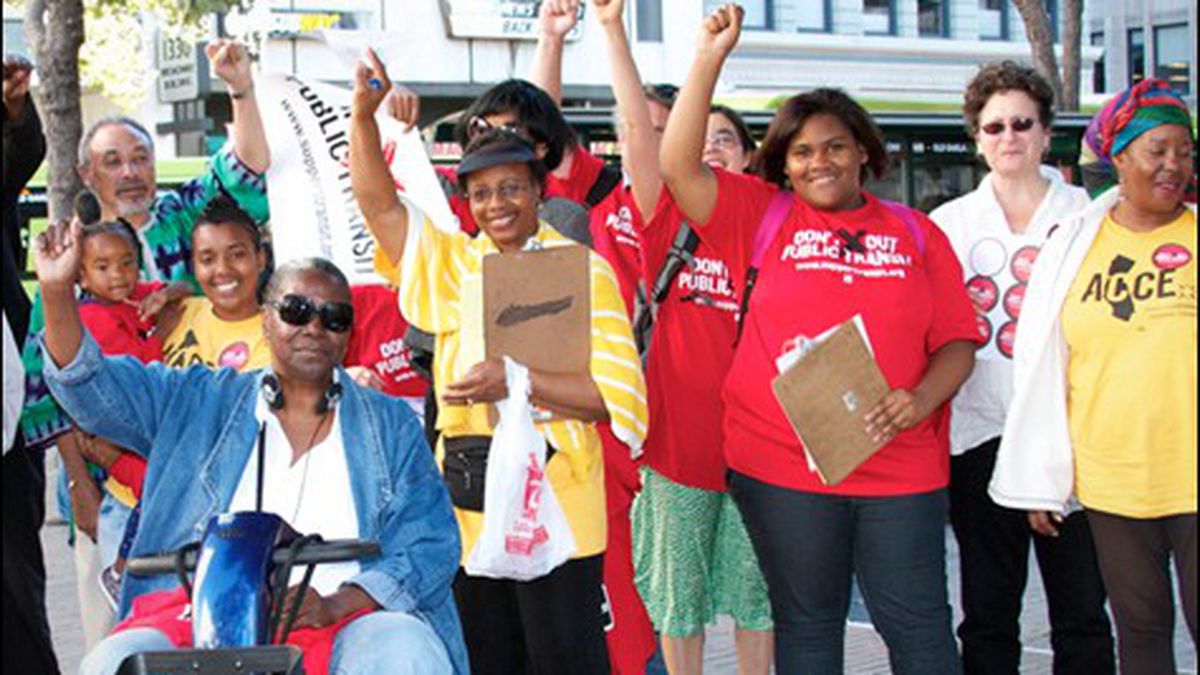 Two powerful regional agencies are moving forward with a housing and transportation plan that they admit is inferior to one backed by environmental and social justice groups.

Next month, two Bay Area agencies are scheduled to approve a sweeping plan that promises to shape housing and transportation in the region for a generation to come. The state legislature mandated that the Metropolitan Transportation Commission (MTC) and the Association of Bay Area Governments (ABAG) adopt such a plan as part of SB 375, a landmark 2008 law designed to reduce greenhouse-gas emissions in California. In recent months, MTC and ABAG staffers identified a plan that they concluded is “environmentally superior” to four others under consideration. However, the agencies are instead currently moving forward with a less environmentally beneficial proposal that they produced.

The proposal that the agencies staffers admitted is the “environmentally superior” plan is known as the “Equity, Environment, and Jobs” (EEJ) alternative, and it was developed by a broad coalition of social-justice, environmental, and health organizations in the Bay Area. The coalition has gone by the name 6 Wins — named so for its focus on affordable housing, robust and affordable transit, investment in communities without displacement of low-income residents, healthy and safe communities, economic opportunity, and increased political power for local residents.

The EEJ proposal would ramp up funding for local bus and light-rail service and would cancel plans to widen freeways, noting that a large body of research shows that constructing more highway capacity increases car travel and greenhouse gas emissions. In addition, the EEJ proposal advocates for more affordable housing near jobs, so workers won’t have to drive, and calls for additional protections for low-income residents, so they won’t get displaced from their homes.

Yet after 249 public meetings and numerous studies, ABAG and MTC staffers are asking elected officials to adopt the plan they prepared. The agencies contended in their environmental impact report that the differences between the staff’s “preferred alternative” proposal and the EEJ proposal are only marginal. The agencies also have noted that their proposal, like the EEJ proposal, is designed to spur more dense housing development in cities near transportation hubs in order to cut down on long car commutes.

However, members of the 6 Wins coalition are taking issue with MTC and ABAG’s characterization of the differences between the plans. Richard Marcantonio, managing attorney of Public Advocates, a legal nonprofit that is part of the 6 Wins coalition, wrote in a blog post on his organization’s website that the EEJ plan would result in 568,000 fewer tons of carbon dioxide emissions a year, 3.5 million fewer miles of car travel a day, and 12.5 percent more local transit service. The EEJ plan also would be better at meeting equity goals: Fewer low-income people would risk getting priced out of their neighborhoods, and lower-income families would pay less for transportation and housing.

The MTC/ABAG proposal, for example, calls for maintaining the current level of local transit service for the next few decades despite anticipated population growth. The MTC/ABAG plan “was geared to reducing the amount of driving but didn’t plan for operating more transit,” said Clarrissa Cabansagan, transportation advocate for the nonprofit TransForm. “That’s a pretty glaring disconnect.” ABAG projects that the Bay Area’s population will grow by 2 million people by 2040.

There’s also a significant difference in where the plans would steer new transit-oriented housing development, also known as smart growth. The MTC/ABAG plan would put most of the new housing in “priority development areas” that local governments have previously identified. But the lack of affordable housing near some job centers, including in the suburbs, has exacerbated climate change over the years because it forces low-wage workers to drive many miles to work. The EEJ plan, as a result, proposes locating new high-density and affordable housing next to jobs and transit — whether or not the cities have created “priority development areas.”

However, representatives of MTC and ABAG contend that some Bay Area cities would balk at such a plan because they don’t want more affordable housing. “I have people complaining that there’s too much affordable housing,” said Karen Mitchoff, who represents central Contra Costa County on the board of supervisors and sits on the ABAG executive board. “People have a misconception about what affordable housing means, that those who live in affordable housing don’t measure up — won’t keep up the property, [that they are] criminals.”

ABAG Executive Director Ezra Rapport argued that regional plans that don’t have buy-in from cities often fail because they’re “not connected to the realities of what cities want. One of the key aspects of planning is to work in collaboration with [local governments],” he said. “If the city is resistant to building housing and you put in the plan X number of units, it won’t happen.”

It should be noted that, regardless of what plan MTC and ABAG adopts, the agencies do not have the authority under law to force cities to build affordable housing. In fact, the only way regional bodies can turn any of their plans into reality is through persuasion — and incentives. The agencies control a pot of federal money that provides grants to local communities for transportation and infrastructure in transit-oriented areas. Many communities, as a result, have created new “priority development areas” to get a shot at some of this grant money. MTC and ABAG are scheduled to select a proposal that will become known as Plan Bay Area on July 18.

In terms of transportation dollars, the EEJ plan would not only increase funding for the operation of local bus service, but also would help finance free bus passes for youth. According to a report issued last month by the Alameda County Public Health Department, which backs the EEJ plan, recent cuts in bus service have caused serious harm to the health and well-being of people who depend on public transportation.

Oakland resident Dennis Fagaly, a member of Genesis, a community organization that fights for equity and justice, gave an example. His neighbor, he said, had been out of work for a long time. “He finally got a job, but it was at night,” Fagaly said. “But the buses had been cut back and weren’t running at night, so he had to turn down the job.”

Funding for local bus service is not only critical for people without cars, it’s also necessary to getting people out of their cars, said Oakland resident Kit Vaq, chair of Riders for Transit Justice, part of the Alliance of Californians for Community Empowerment (ACCE). “The buses are the lines that feed into the larger system,” she said. “They’re the capillaries. They go into the communities where BART can’t go. Without good bus service, people will still be driving.”

Affordable housing advocates said the adopted plan should make low-income housing a priority and described its importance in their lives. Oakland resident Karen Smulevitz, an activist with United Seniors of Alameda County, said since she moved into affordable housing, “I don’t spend as much on rent so I have more for things I need.” Tens of thousands of Bay Area households spend more than half their income on housing.

6 Wins member organizations also want strong protections to keep low-income residents from being pushed out of neighborhoods near BART. Even ABAG noted in a report that West Oakland is one of the places in the Bay Area in recent years in which “migration into … transit-oriented neighborhoods … is associated with rent increases, evictions, loss of affordable housing units, and disrupted social networks.” Projections showed that with the MTC/ABAG plan, more than 40,000 low-income households would be “at risk of displacement.” The EEJ plan, by contrast, would risk displacing more than 27,000 households.

ABAG has been studying the problem of displacement for a few years, but “in the last few months this issue has come up as essential,” said ABAG Planning and Research Director Miriam Chion, who acknowledged this is partly due to advocacy by the 6 Wins coalition. A market-rate housing development, she explained, can lead to indirect displacement in the surrounding area. “Higher-income people moving in will lead to more desirable services and amenities, restaurants, a grocery store, cultural centers,” she noted. “This sends a message to other property owners that this area can attract households with higher incomes.”

What could protect households at risk of displacement? Public Advocates suggests requiring all housing developers to make a percentage of their apartments affordable, banning evictions without a “just cause,” restricting rent increases and condo conversions, barring discrimination against holders of Section 8 vouchers, and more. (Some of these proposals, however, may require changes in state law.)

Berkeley Mayor Tom Bates, a supporter of the MTC/ABAG plan, also acknowledged that it is “important to address the trend that a lot of the poor people who live in cities are being pushed out by skyrocketing rents,” and that this problem “is not addressed adequately in the plan.” The big problem, though, he said, is that “affordable housing is now extremely difficult to construct because the money has all dried up, with the loss of [state] redevelopment funds and federal funding.” 6 Wins spokespeople and ABAG staff agreed that advocacy for more funds and better policies should be part of the plan.

The 6 Wins coalition has already had an impact on Plan Bay Area, and its EEJ plan has won endorsements from an unusually broad range of organizations, including the California branch of the American Lung Association, the League of Women Voters, environmental organizations (National Resources Defense Council, Greenbelt Alliance), and social-justice groups (ACCE, Genesis, the East Bay Housing Organization, and many more). A number of other agencies, including the cities of Emeryville and Oakland, and the Sierra Club, endorse many of its provisions.

In the weeks left before the vote, 6 Wins advocates will continue to push for inclusion of more of their proposals in the final plan. Although the plan will be reviewed every four years, “We want to make it the best it can be now,” said Cabansagan of TransForm, “not wait for the next round.”