.Barkada Makes Everything Better With Bread

The Temescal business makes a successful leap from bakery-cafe to full-fledged restaurant. 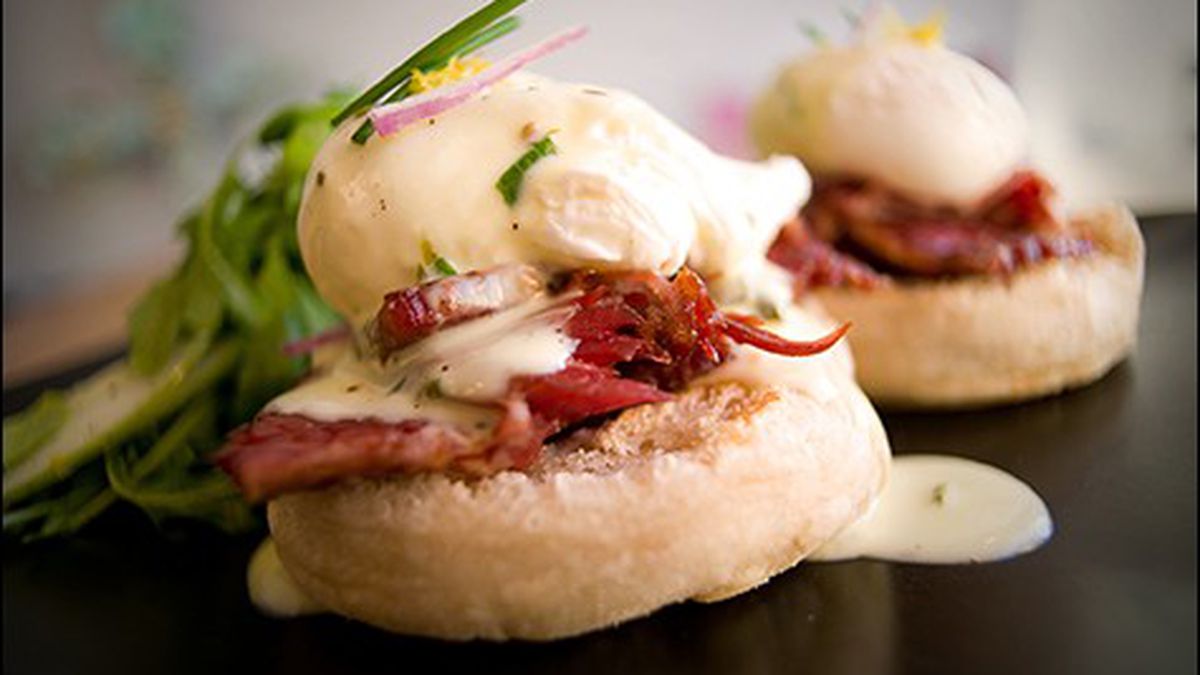 Gone are the days when a coffee shop could coast on the quality of its cappuccino alone. Here in the East Bay, it seems the minimum standard for coffeehouse food is a decent selection of Starter Bakery pastries. But plenty of cafes have gone further, rolling out more, and increasingly ambitious, house-made food options — not just cookies and muffins, but sandwiches stuffed with name-brand sliced meat, soups that come by way of the local farmers’ market, and, in some cases, even bona-fide entrées.

But few would mistake any of these coffee shops for a restaurant. The food, even when it’s “fancy,” is usually limited to things that can be easily assembled by baristas. Even cafes that employ an actual chef are hamstrung by the fact that many cafe-goers don’t want to spend more than $10 on a quick lunch.

So it has been striking to see the evolution of Barkada, a quaint little boutique bakery-cafe that opened in May — a collaboration between co-owners Christina Bondoc, a pastry chef, and Rick Yarussi, a coffee enthusiast. At first the food selection was similar to what you’d find at any other high-end coffee shop: plenty of pastries (including the best chocolate croissants in town), but few options for a full meal beyond a handful of sandwiches. According to Bondoc, customers kept asking her to expand the menu.

So, starting about a month ago, at 5 o’clock every evening, Bondoc shuts off the wi-fi and shifts gears: On weeknights, and all day long on weekends, Barkada is now a full-service restaurant. And Bondoc, for her part, is no longer just a baker but a full-on chef.

Bondoc said her idea was to develop an “oven-centric” cuisine — dishes that would highlight the breads and other goods she could bake in the huge gas-deck oven that takes up the bulk of the kitchen. Weekend brunch was never much of a stretch, then. Bondoc’s French toast, for instance, features a house-baked levain made with Community Grains whole-grain flour. And her house-made granola had enough roasted-nut smolder to stand leagues apart from any store-bought version. (It was almost more savory than sweet — a quality that might not be to everyone’s taste.)

My first brunch visit started with an order of baba Savarin: three elegant, sugar-dusted, doughnut-shaped cakes soaked in sweet rum syrup and topped with cooked apples, toasted walnuts, and whipped cream. These were almost too pretty to eat, and they set the tone: Barkada is the kind of place that cares about such niceties as artful plating. As for the baba, I’d recommend this as a decadent end-of-brunch dessert, but not as an “appetizer” — the cakes were so rich and eggy, they nearly sunk my appetite.

The restaurant’s crowning glory is its eggs benedict, which stands as a testament to how good a simple dish can be when each element is thoughtfully considered. The benedict starts with a base of house-made English muffin — crisp-bottomed and tender-crumbed — that is topped with slices of lush, fatty corned beef (from local charcuterer Fifth Quarter) and a lovely poached egg. Instead of traditional hollandaise, Bondoc uses a tarragon-spiked herb sauce that’s more akin to a béarnaise — tangy but perfectly balanced. To help cut into the richness of the main course, a lemony arugula salad — festooned with slices of tart green apple — was served on the side.

The individual-portion “pizzettes” were rustic in appearance, cut into odd-size squares like you’d do with the kind of flatbread pizza you might serve at home for build-your-own-pizza night. But these were much, much better. The crust is super-thin and super-crisp, with enough chew to prevent it from feeling insubstantial. One was topped with excellent Fifth Quarter ham, spicy tomato sauce, skinny little chives, and a cracked egg. Another had caramelized onions; slices of juicy, red-skinned pear; and just enough Valdeon blue cheese to add a welcome bit of funk.

A note to the frugal: Bondoc admitted the $3 pizza deal might not last forever or, at least, that it’ll eventually be limited to one or two pizzettes, whereas now you can choose from five or six options — even pies that normally sell for $13. Get them while the getting’s good.

The rest of the dinner menu tends to skew French, with versions of classic bistro dishes like beef bourguignon and salade Niçoise making recent appearances. (Even the aforementioned pizzas felt like a French-Californian hybrid.) Bondoc’s Niçoise was a worthy entrant in the underrepresented hearty-salad-as-a-meal genre. It’s served “deconstructed,” with all the components lined up in pretty rows: tender-crisp green beans, halved grapes and grape tomatoes, fingerling potatoes cut into cute little rounds, several generous slices of rare ahi tuna, and a poached egg. One could scarcely ask for a more wholesome dinner, though I wished the flavors had more oomph: The anchovies and capers (both listed in the menu description) were nowhere to be found, and the tuna just needed more salt.

There’s also a burger that features Prather Ranch grass-fed beef served on a house-made olive oil brioche bun, as well as a seasonal soup whose current iteration — a spicy, silky roasted kabocha squash version — I’ve had a couple of times. Served with a baby arugula salad and a slice of grilled levain toast, it makes a good starter, or a light lunch all by itself. (The burger, meanwhile, is high on my list of things I need to go back to try.)

Bondoc told me her business partner was actually the one who came up with the name of the cafe, which is a nod to her Filipino heritage: barkada means “group of friends” in Tagalog. Now, more than ever, she sees the cafe becoming an “every-other-day kind of place” where folks who live nearby can swing by for a casual, relatively inexpensive meal whenever they don’t feel like cooking.

Will the transformation be a success? Hey, no one ever said it’d be easy to turn a bakery into a restaurant. But so far, Barkada is pulling off a pretty convincing impersonation.

Next ArticleThursday Must Reads: Oakland Airport Connector to Open This Year; Soda Tax Would Save Up to $1 Billion in Healthcare Costs