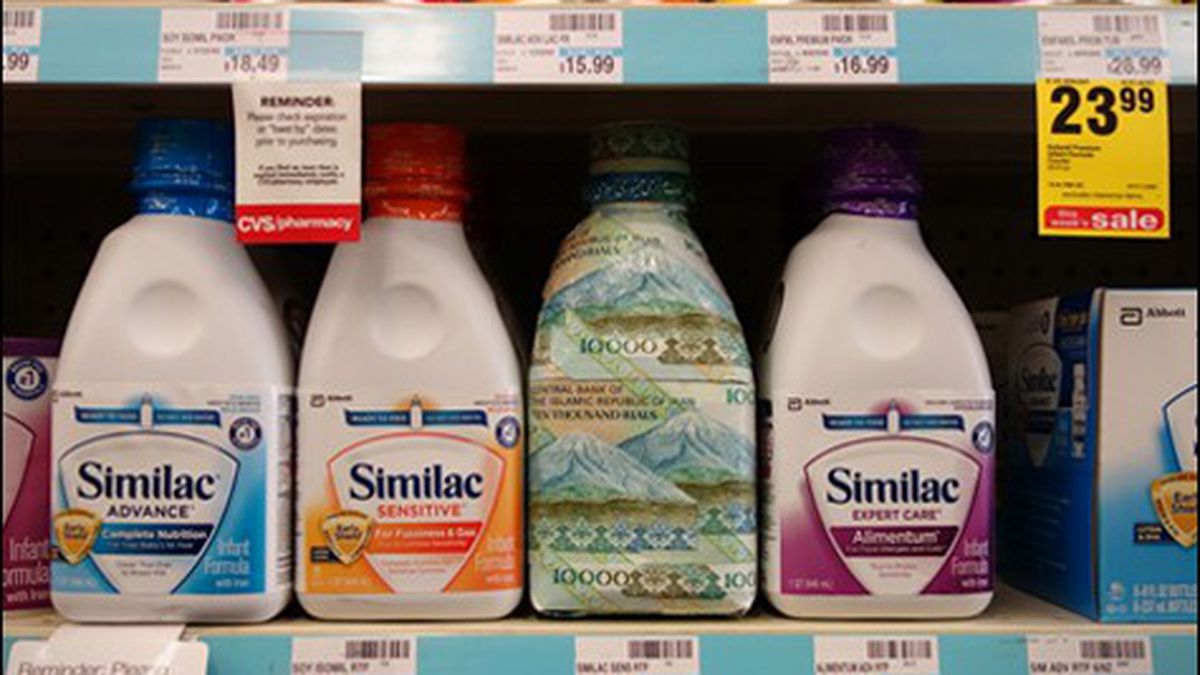 The artist presents a politically pointed exhibition about the effects of American economic policy on the people of her native Iran.

Sublunar, Azin Seraj’s debut solo exhibition now at Martina } { Johnston Gallery, is one of the more overtly political exhibitions you will find in Berkeley presently. The artist, who holds citizenship in Iran and Canada, presents a vehement counter-narrative to the Obama administration’s rhetoric around placing escalating economic sanctions on Iran. At the same time, Seraj sees her work as, above all, “synthesizing personal experiences and meaning” in the contexts in which she operates. Her pieces often drift askew of hard politics toward a more expansive, even mystical aesthetic terrain. The result is illuminating.

Although exhibited in the gallery’s back screening room, Sublunar‘s frontispiece is “Lullaby,” a video in which hazy and unsettling imagery — rows of ice cubes dyed to resemble the Iranian flag slowly dripping, plumes of likewise colored smoke curling up into a burnt-orange cloud — accompanies an audio track of Obama triumphantly announcing the tightening of economic sanctions on Iran in condemnation of the country’s nuclear program. “We are sending a clear message that we stand with the Iranian people as they seek to exercise their universal rights,” he concludes. Text then appears on screen before a moonlit nocturnal scene, effectively replacing the suggestive opacity of the previous visuals with a clear position: the sanctions, although couched by the American president in a rhetoric of humanitarianism, have in fact resulted in serious shortages of food and medicine for Iranians. Obama’s waxing on universal rights hence rings with “no validity or justification amongst Iranians across the world.”

Rampant inflation is at the fore of the Iranian people’s plight, and many of the works in the show address this in one way or another. “Bowl of Patience” is a video featuring interviews with Iranians about their difficulties making ends meet under conditions of unpredictable pricing. In a visual akin to the smoke and melting ice that lend entropic visuals to “Lullaby,” here, droplets of water begin to fall upon the image, which is in fact being projected upon a metal bowl. Slowly the vessel fills, submerging and distorting the subjects’ faces as their stories repeat. Nearby, Seraj presents a photograph of amply stocked baby formula — a scarce resource in Iran — in an American drug store, where one carton has been wrapped in the Iranian banknotes.

But then there are works that offer no ready-to-hand interpretations: a photograph of the ornately tiled tomb of the Persian poet Hafez, forced partly out of frame by a splendid moon competing for center space; a diptych video of the artist digging a hole in one feed, filling it in the other, placed alongside a vile of dirt from the ancient city of Persepolis. In yet another video, the artist explores her old primary school in Dehkadeh, now abandoned and in disrepair, and aids a trapped bird. These works suggest that Seraj may indeed not be only concerned with making a political statement, but also with reflecting on her own transnational identity, which exists somewhere between Iran and North America — somewhere sublunar, amid the manifold valences of the word.

Should Oakland Unified, UC System Cancel School on Friday Because of...