.At Shotgun Players, a Game of ‘Hamlet’ Roulette

The cast of Shotgun Players' Hamlet switches roles for each performance of this triumphant start to the company's 25th anniversary season. 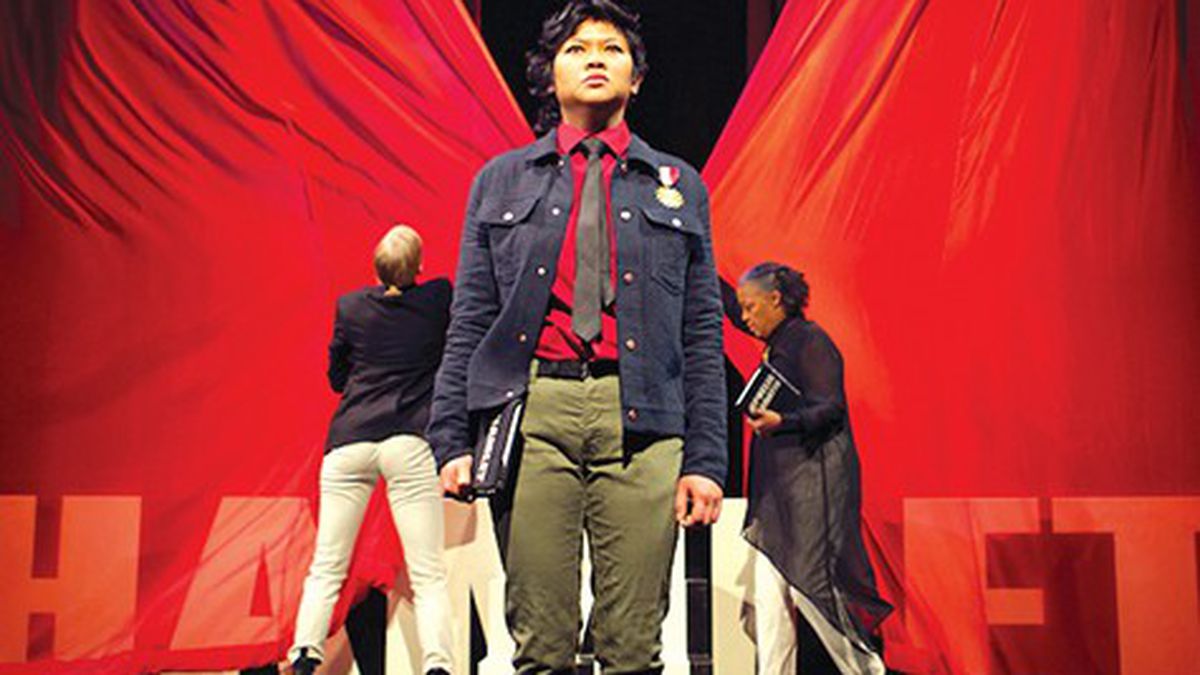 It’s a daunting premise, but one that the cast of director Mark Jackson’s Hamlet pulled off with wild success: seven actors learned every part in the play, and, minutes before show time, assembled on stage to pick their roles out of a prop skull. After a few minutes of preparation, the show began. The production opened at Shotgun Players (1901 Ashby Ave., Berkeley) on March 31 and will run through May 15, with regular repertory performances after that. But with 5,040 possible casting combinations, it’s likely that no two performances will be the same.

By opening up Hamlet to thousands of possible casting combinations, Jackson inevitably defies traditional assumptions about the gender, age, and race of the play’s well-known characters. For instance, the titular Hamlet might be played by a woman and his love interest, Ophelia, might be decades older than the young prince. Rather than hampering the performance, this spontaneous diversity seizes upon the universality of Shakespeare’s work in a way that many other productions fail to — fully revealing the kernels of common humanity within each character.

The performance I attended included a completely nontraditional cast, including women in the roles of Hamlet (El Beh) and Polonius (Beth Wilmurt), Ophelia’s father. Meanwhile, Hamlet’s mother and stepfather, Queen Gertrude and King Claudius, were played by Nick Medina and Megan Trout in a compelling, gender-swapped pairing. The production took a few scenes to find its footing, but Beh’s powerful performance as a delightfully snide, dark-humored Prince of Denmark soon set the tone for a dark but decidedly witty Hamlet.

As if the rotating casting wasn’t challenging enough, several actors played not one, but two roles throughout the night. Medina and Trout, who played Gertrude and Claudius, also played the inept courtiers Rosencrantz and Guildenstern, allowing the duo to stay together throughout most of the performance. Similarly, Cathleen Riddley played both Horatio, Hamlet’s best friend, and Ophelia, Hamlet’s love interest. This casting combination was the only one that proved less-than-stellar on the night that I observed, as Riddley was forced to move between two very different roles — and a hefty amount of dialogue — in rapid succession.

But for the most part, the unconventional casting allowed the audience to experience the nuances of the play’s key relationships — such as those between Ophelia and her father, Gertrude and Claudius, and Hamlet and, well, everybody — without being clouded by preconceived notions about how men, women, lovers, or families are “supposed” to relate to one another.

The overall production was meticulously paced with few discernible missteps. Perhaps that’s due to the cast’s grueling rehearsal process that began in February, which involved round robin-style scene work in which all members of the cast would rehearse each part in any given scene. In addition, Jackson worked with the actors to cut the original text down to its final two-and-a-half-hour runtime. All that preparation clearly paid off: The cast’s timing and dialogue delivery were both outstanding.

Besides its casting and rehearsal practices, the production is also cleverly self-reflexive. Sparse set design by Nina Ball consisted of one onstage platform shrouded by two sets of red curtains, plus an illuminated applause sign that was deployed at strategic moments. Rather than disguising the theater, the set up emphasized its aesthetic tropes, reminding the audience of the play’s “play-ness” even as they watched it unfold.

Similarly, the actors held onto their scripts — bound in black covers and embossed with their respective characters’ names — throughout the performance. Presumably, the books served as safety blankets — although they were never used for emergency line retrieval in the production I attended. But, with some imagination, they also functioned as impromptu props, like the gravedigger’s shovel or a dossier of Hamlet’s love letters to Ophelia.

At the start of the show, holding the skull that contained the evening’s cast list, director Mark Jackson offered some sage advice about life and theater. “We all know where we end up,” he said, gesturing to the skull. “The journey is the thing.” Indeed, Shotgun Players’ Hamlet is an exhilarating journey, and one that manages to stoke the audience’s appreciation for the very mechanics of theater while its powerhouse cast brings new vitality — and vigor — to a well-known play.