With Oakland Free UP, Jocelyn Meggait aims to challenge conceptions of capitalism, consumerism, and community. 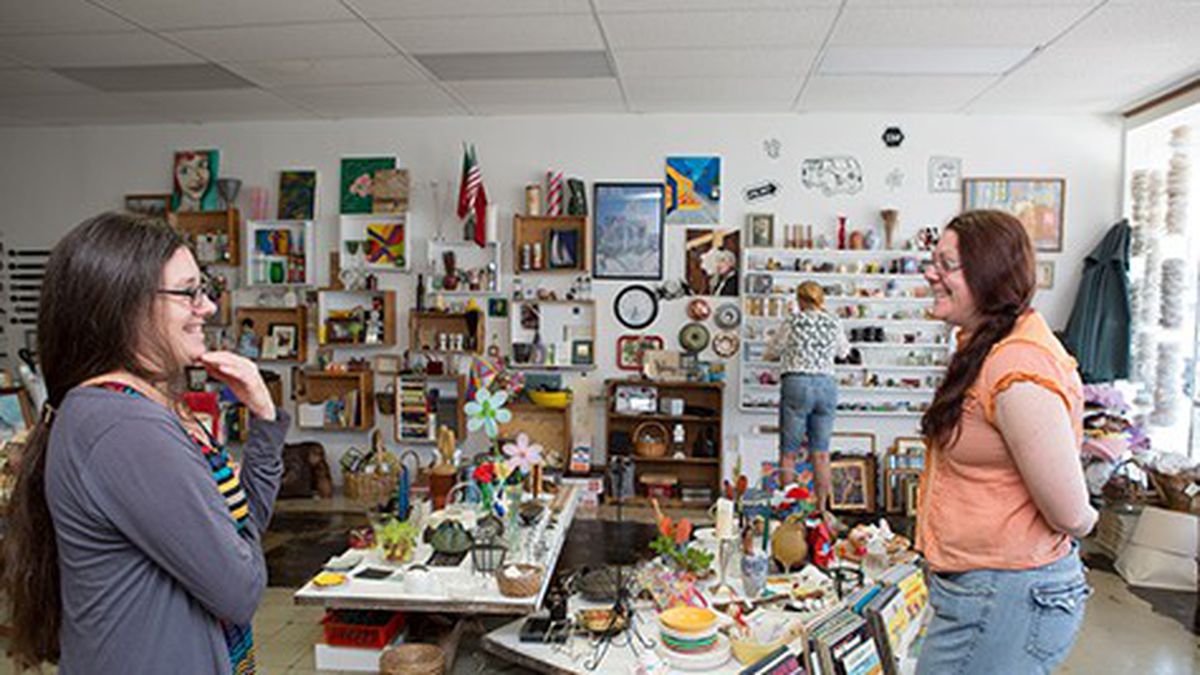 Oakland artist Jocelyn Meggait runs a store in the Dimond district in which everything is free, and signs on the front windows invite visitors to come in and take what they want. But passersby often overlook the shop, turning a blind eye because it doesn’t fit their understanding of how the world works. After all, there’s no such thing as a free lunch. But children, who are less familiar with idioms, will often run inside and start looking around, followed by their skeptical parents. That’s when Meggait jumps on the opportunity to explain herself: She’s a social practice installation artist with a focus on alternative economies. That means that instead of creating objects, she creates experiences — specifically, ones intended to prompt discussions on alternatives to capitalism.

Meggait creates these experiences primarily by giving things away. In May, she signed a two-year lease for the approximately 1,000-square-foot storefront that is now Oakland Free UP (2809 MacArthur Blvd. Oakland) — a free store, art gallery, and maker-space. For now, the $900-a-month rent is coming entirely out of her own pocket — specifically, from an inheritance she received two years ago when her parents passed away. “I could have bought a car, I could have gone on a trip … but I decided to do this,” Meggait said in an interview.

The daring decision to invest her money in the project didn’t come out of nowhere. Oakland Free UP is the latest edition of a social practice series that Meggait has been developing for the past four years called Free Utopian Projects (hence the “UP”). The series has taken many forms, but every incarnation has remained tethered to the act of giving things away for free. This year, she felt it was finally time to take root in a community and make her personal practice of avoiding consumerism public. Even though most people called her crazy, she felt it was a project she needed to pursue.

Meggait began her artistic career as a painter, but ultimately found selling her paintings to be nearly impossible. She eventually realized that people were much more willing to trade goods and services for them instead. “I got tickets to Disneyland, a great bottle of wine, and guitar lessons for my husband. … It was great!” she said. After that, she discovered the Craigslist “Free” section, and everything snowballed. “I realized that there’s a whole other economy going on, and people are living for free,” she said. She wasn’t interested in the goods as much as the notion that communities of people could come together and circumvent conventional modes of commodity exchange.

Eventually, this obsession led Meggait to shift her art practice from painting to interactive installation, and she started Free Utopian Projects. She began with a free pile in Kala’s 2011 group show Cashing Out. Visitors were invited to donate or take from the pile as much as they pleased throughout the exhibition’s run. In 2012, she expanded that idea into a dense, large-scale installation at the Mills College Art Museum for her MFA thesis project. She filled the gallery with objects that she had been collecting for a full year, then invited people to take as many as they wanted, as long as they considered the objects’ past, present, and future economic and ecological presence. A year later, Meggait presented the Free Gallery at Pro Arts, for which she asked more than one hundred artists to donate a piece of work, then invited each visitor to take one home. She has also done similar projects in Austin, San Francisco, and Redwood City.

At Free Oakland UP, Meggait continuously replenishes tasteful displays of donations and other free goods that she has collected, and offers them up to whoever wanders in. Her only condition is that each person take only one item per day. For practical reasons, she doesn’t accept or offer clothing, but the shop is packed with antique lamps, kitchen appliances, decorative knickknacks, paintings, and other household items. Along with the store, the space also houses an art studio and a gallery.

Meggait’s overarching goal is to call attention to America’s addiction to mindless consumption. Through the simple acts of giving and reuse, her project highlights issues of consumerism, environmental crises, and lack of community. Although capitalist practices of consuming seem natural to most of us, Meggait hopes to complicate those conventions by revealing their malleability. Her idea is that when someone receives something for free, and in the process is told that he or she is reducing excess, helping the environment, and sharing within his or her community, the item will function as a reminder of those values.

The rule that each visitor may only take one item per day is set in place to foster this kind of thoughtful consuming experience. Confronted with a room full of free things, visitors must often undergo a mental reworking to decide which single object they are going to use and enjoy. “The Walmart style of shopping is to get as much as you can,” said Meggait. “This is not about that kind of conspicuous consumption.”

One of Meggait’s other goals is to draw in folks who wouldn’t normally make time to see art. Meggait’s intention is that people not walk into the store as if they are walking into a gallery, but that they nonetheless emerge with an expanded understanding of the various forms that art practice and art spaces can take. She hopes that visitors will let go of the inhibitions that surround interactions with art, and become fully immersed in the space, shopping around to choose their favorite object. “I want people to not be intimidated by art and not be intimidated by art galleries,” she said.

Still, Meggait has found that people are often hesitant when entering, as if they are expecting a catch. Some visitors have even expressed anger at her because they feel that what she’s doing is wrong. “‘You’re trying to put a square peg in a round hole, and this just doesn’t make any sense!'” Meggait recalled one woman telling her. “That’s exactly what I’m trying to do,” she said. “I’m trying to stir things up a little.”

But most people have happily embraced Meggait’s presence in the community. She said she often meets people who are struggling financially, many of whom have been formerly incarcerated. “This guy came in and he took something for his grandma because he’s never been able to get her anything before and she’s put up with a lot,” Meggait recalled.

Meggait’s work is wrapped up in systemic global issues, but it also aims to target wealth disparity in Oakland specifically. “Because Oakland has wealthy people who can give and has poor people who need,” Meggait said.

Soon Meggait will be in need of funds herself, unless monetary donations start coming in. But perhaps what makes this a Utopian Project is its inherent unsustainability in our current economic climate. For such an alternative to be realized without being risky, a lot would have to change.