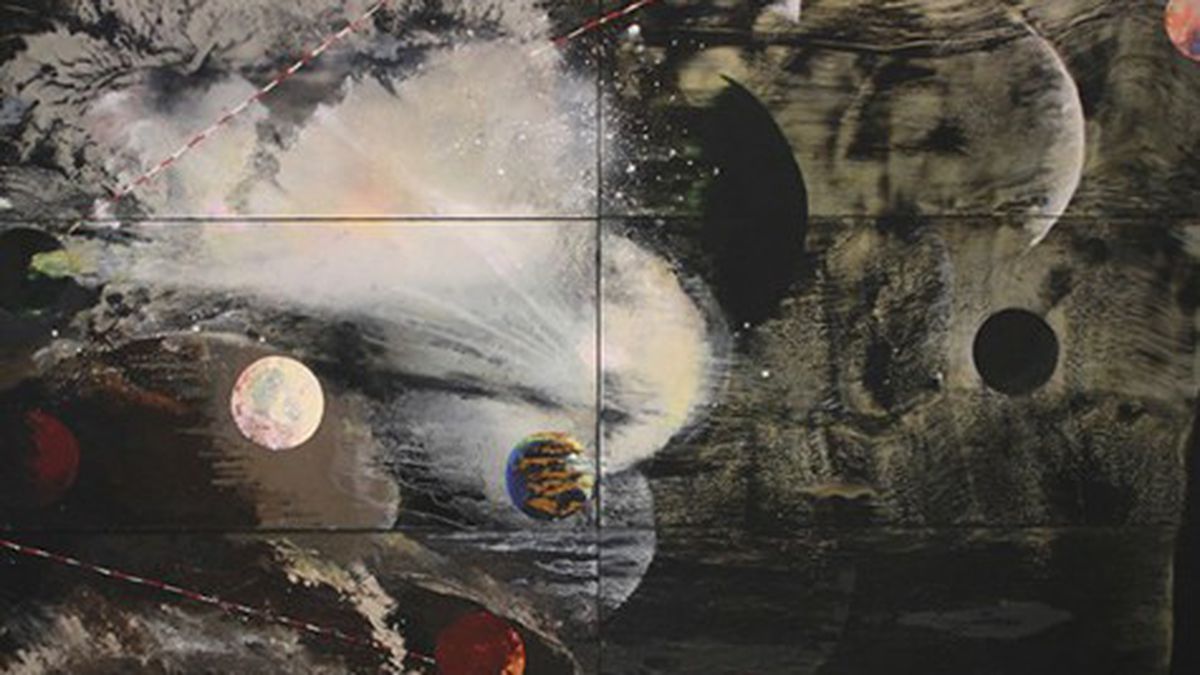 An Affinity for the Boundless: Vessel Gallery’s Cosmic Crush

What exists outside the terminus of earth’s limits? Artists Younhee Paik and Cheryl Calleri charted answers to this question for the show Cosmic Crush, on view at Vessel Gallery (471 25th St., Oakland), until September 26. Driven by an obsession with boundlessness, the artists have transformed the gallery into a terminal from which to embark on a celestial journey. The gallery’s quiet, sweeping architecture provides the requisite stillness to confront the immense ether that’s the topic of the show, while futurism forms the conceptual backdrop upon which the constructed universe of Cosmic Crush rests.

Paik is originally from Korea, and splits her studio time and exhibitions between Seoul, San Francisco, and New York. Despite her diminutive frame, many of Paik’s large creations provide grand views of the universe. In the painting Skylark, the palimpsest of a twelfth century Czech cathedral floor plan forms the focal point of an enormous celestial terrain. Yellow and blue gaseous materials merge with the geometric stature of the church plan — an inclusion without overtly religious connotations, according to Paik. For her, the hybrid hints at an amalgam of the realm of earthly floors with that of the heavens — a divine marriage of the rigid and amorphous. In another painting, Odyssey, a ghostly ship glides airily through stars, reflecting Paik’s understanding that any nautical journey is inextricably linked to the night sky. Through slow, considered reflection of the relationship between people and their natural environments, Paik demonstrates a burning curiosity for the elemental processes of air, water, fire, and earth.

Meanwhile, Calleri’s dialogue with the hypotheses of history’s astronomers, as well as with more contemporary science of celestial objects, results in a set of revolving planet sculptures that may be viewed in motion or still. One of Calleri’s opening pieces for Cosmic Crush, titled 1793 Herschel’s Dream, is also accompanied by intriguing planetary sounds. To conjure a sound audible to human ears, scientists analyzed frequencies of light variation akin to sound waves using a technology called “fourier analysis.” The resulting audio provides the chilling, contemplative soundtrack for 1793. Anatomically, the dreamed-up orbs in the piece connect via metal to a centripetal motor, repurposed from the common disco ball. Fine brass spokes attached to a central steel stand form the base for the revolving planet sculptures and the grace of their slow moving circuits. Calleri’s metallic-looking moons, made of polystyrene, are embalmed in gold, blue, and white painted crusts, creating coarse, cratered textures. In some pieces, the polystyrene has been burned to develop a lava-like crust over the surfaces of the spheres. While much of her work is based on scientific research, Calleri’s moons and planets are imagined, paying homage to the anonymous astronomers of the late medieval and early modern periods who didn’t have the technology to see what they knew existed.

Much of how we conceive of life and human identity on earth is defined by category, confine, and, increasingly, scarcity. Through engaging at once with scientific fact, philosophy, and religion, the artists in Cosmic Crush reveal the ways that our undeniable grounding on earth can be boundless, too. Situated in the morose context of devastating global climate change, the exhibit pries open space for a liberating environmental curiosity.