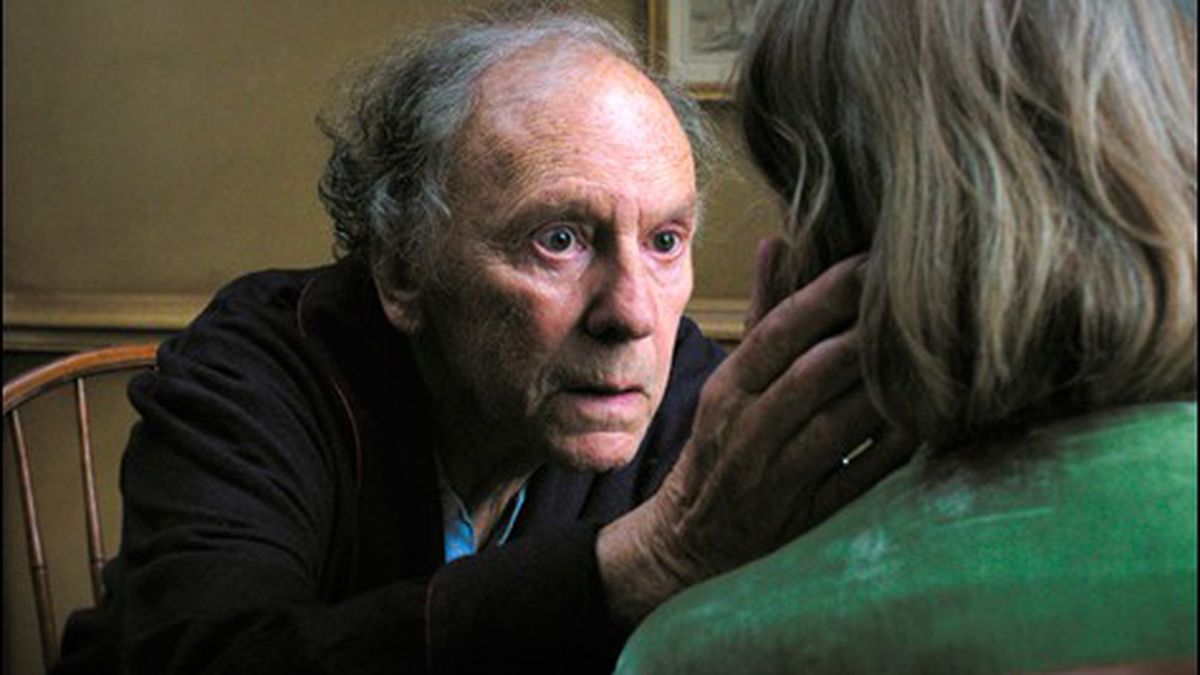 A bitter, pitiless piece of work.

Anne (Emmanuelle Riva) and Georges (Jean-Louis Trintignant), the protagonists of Michael Haneke’s Amour, are a genteel, cultured married couple of advanced years who live in one of those old-fashioned Paris flats that never fail to amaze Americans — it goes on forever. So, apparently, do the professional and personal associations of Anne and Georges, retired classical musicians and teachers whose grown children, played by Isabelle Huppert and Alexandre Tharaud, are musicians themselves.

It’s obvious in the faces of the two spouses that they care very deeply for each other, so it’s especially worrisome when Anne, one morning at breakfast, suffers a stroke that eventually paralyzes the entire right side of her body. Georges is obliged to care for Anne, and he does so diligently and with great tenderness, feeding her, changing her clothes and bedding, etc. But Georges cannot stop Anne’s physical and mental deterioration. She is plainly slipping away. This realization begins to take a toll on Georges’ patience, but he and the occasional in-home medical assistant continue to attend to his wife as she steadily grows weaker.

In the vast majority of mainstream commercial movies on the subject of senior citizens facing death, the filmmakers work overtime to emphasize not only the obvious pathos of the situation, but to somehow instill a note of hope — something in the nature of believing in a love that never fades, that cherished memories live on even when those we love are taken from us. In Amour, none of that happens. We’re in the hands of Michael Haneke.

The seventy-year-old playwright-screenwriter-director, a native of Munich now based in Vienna, specializes in stories of dread and anxiety punctuated by sudden violence. The two versions of his Funny Games (one in German, one in English with an American cast) feature a pair of sadistic home invaders who humiliate their victims before murdering them. In The Piano Teacher, a classical musician (in a mesmerizing performance by Huppert) can’t hide a grotesque sexual obsession with one of her students. Caché, arguably Haneke’s most accessible film, shows a Parisian family being stalked by an unknown tormentor. The White Ribbon details sinister goings-on in a German village just before World War I.

Other filmmakers have trod similar paths. David Cronenberg delights in making audiences squirm with his medical horror tales. Eli Roth, the Hostel keeper, does popular updates of Grand Guignol. Quentin Tarantino loves shock for its own sake, with one degree or another of social commentary trailing along behind. And Alfred Hitchcock, as we’re reminded in the recent Hitchcock, played his voyeuristic dark side for sophisticated laughs as well as chills. But Haneke lacks a sense of humor, or even much willingness to let his audience in on the gag. He is a very cold, very cruel filmmaker.

On the face of it, Amour is an account of the terrors and embarrassments of growing old, and it takes full advantage of veteran French actors Trintignant (Z, The Conformist, A Man and a Woman) and Riva, who starred for director Alain Resnais in Hiroshima, Mon Amour. Riva is especially touching in the scenes in which Anne is slowly losing her grip — her refined civility and essential dignity quietly abandon her as death approaches, and it’s up to Georges, as the stronger of the two, to take charge. Anne doesn’t want anyone to see her in that condition.

Dying by degrees is a sad and humbling experience, for the partner as well as the patient. (Compare Georges and Anne’s plight to that of Julie Christie’s Fiona in director Sarah Polley’s unabashedly sentimental Alzheimer’s drama Away from Her.) Meanwhile, their estranged children and somber, grieving colleagues quickly filter in and out, in a hurry to pay their respects and be on their way, leaving the pathetic couple alone in the apartment. We can’t help reflecting that educated, upper-middle-class people like these are almost always the butt of Haneke’s little excursions into hell on earth.

Amour — which will likely sell only a fraction of the tickets that any of the Hostel movies racked up — won the Golden Globe for foreign-language films and has garnered five Academy Award nominations, in the Best Picture, Best Actress, Best Director, Original Screenplay, and Foreign Language Film categories. That’s obviously a recognition of Riva’s acting job and Haneke’s consummate skill at constructing an involving melodrama — and maybe a sign of a perceived notion that the film is a sweet story of two gentle old folks holding hands as they face the final curtain.

Nothing could be further from the truth. The ironically titled Amour is a bitter, pitiless piece of work, a flower of evil pressed in a book of unacknowledged prayers. We can admire its components, but we’re repulsed by its vision. There has to be more to life than the picture Haneke holds up to us.

Apocalypse Watch: Lotto to the Rescue

A’s Fremont Deal on the Line