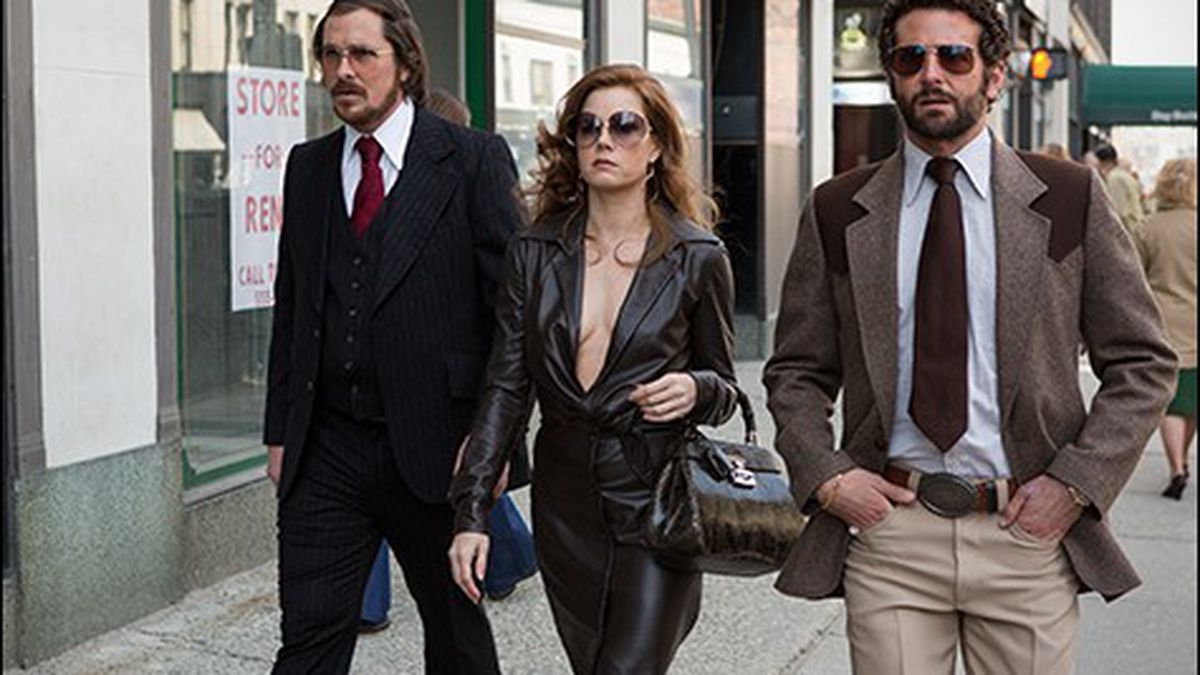 Our very first impression of American Hustle is: Scorsese redux. Director/co-writer David O. Russell’s tale of a group of New York con artists and their marks in the 1980s could conceivably exist on more than one level of meaning, but the motif that pops out most forcefully is the one made famous by Martin Scorsese in such films as Goodfellas and Casino — sleazy people on the griddle, and how they sizzle when the heat gets turned up.

Nothing especially wrong with that. Christian Bale hits a home run in the largely fictional role (loosely based on the Abscam case) of hustler-in-chief Irving Rosenfeld, owner of the comb-over supreme, complete with matching hair puff. Fast-talking narrator Irving, who started in the dry-cleaning business and worked his way up to art forgery and elaborate investment swindles, surely must be the secret younger brother of Rupert Pupkin, hero of The King of Comedy. Irving and his partners in crime Sydney Prosser (Amy Adams, in honey trap mode) and flipped FBI agent Richie DiMaso (Bradley Cooper) make a potent comic-aggressive trio as they team up for their masterpiece: a phony redevelopment deal for Atlantic City involving an ambitious New Jersey politician named Carmine Polito (Jeremy Renner, doing his best), the sexy efforts of Irving’s wife Rosalyn (Jennifer Lawrence, once again the ruler of all she surveys), and a fake Arab sheik who doesn’t speak Arabic (Michael Peña). We can see that this chicken will eventually lay an egg but Russell (Silver Linings Playbook), writer Eric Singer, and the hyperventilating cast keep us guessing well into the second half.

Bale and Lawrence, bickering and barking and making up, are the best reasons to spend time with the hustlers, even when the story gets padded out. It’s essentially just one more Me Decade folly — disco toilets, men with perms — with a high-priced cast and smarter-than-average dialogue, but no real surprises. Robert DeNiro shows up as a gangster (no, really?) and Jack Huston contributes a nice bit as the gangster’s son. Without Scorsese this movie could simply never exist. How much time have you got?