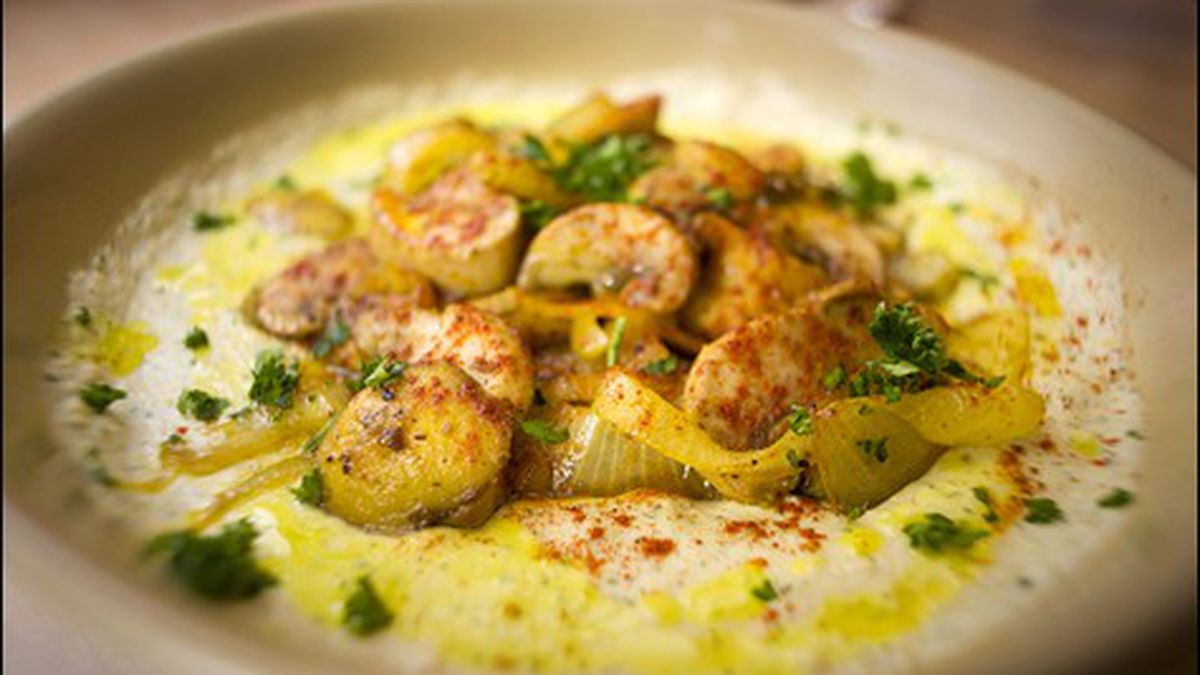 The Montclair restaurant aims to be a Jewish community hub, as well as the first Israeli street food chain.

There’s a curious photo on the website for Montclair’s Amba Falafel. It’s a panoramic shot, capturing the crowded dining area of what is clearly a fast-food joint. The walls are bright orange, the lights are glaring fluorescents, and the soda cooler and menu board display prominent Amba branding. But in the middle of the crowd, right next to the self-serve utensils and condiments, is an Orthodox Jewish man playing guitar, dressed in black with a full beard and fedora. Nearby, men in yarmulkes clap along.

Such is the dual nature of Amba Falafel. On one hand, it’s something of a community center, a thriving hub for the East Bay’s Jewish population. But it’s also the first blush of owner Jonathan Wornick’s plans to create a nationwide chain of franchise restaurants. “You’ve got P.F. Chang’s, you’ve got Chipotle, but nothing for Israeli street food,” said Wornick.

Enter Amba, with extra value meals, plastic sippy cups for kids, and a lemon-slice logo that’s primed for billboards and fridge magnets. But unlike other fast food joints, this one gets near-weekly kosher inspections; it has a ritual hand-washing station outside the bathroom (replete with yarmulkes and prayer books); and it’s closed Friday evenings and all day Saturday in strict observance of the Sabbath.

It’s a strange dichotomy, between the baldly commercial and the reverential. In interviews with Jewish publications, Wornick has stressed Amba’s community-building aspects, bringing together rabbis and Orthodox Jews from around the Bay. But with insider food blogs, he’s talked about his ambitions to create America’s next Chipotle. Somewhere between these two worlds lies the falafel.

Amba’s chow is based on Wornick’s many visits to Israel and New York, fine-tuned by two chef graduates from the Jerusalem Culinary Institute. “This is food you would eat while leaning on a street corner in Tel Aviv with a beer in your hand,” he said, “except clean and fresh.” It’s a smart play, conjuring the romance of faraway street food, but sanitizing it for the risk-averse Western palate. Certainly this immaculate, brightly lit Montclair eatery, brimming with kids in soccer gear and older Jewish gentry, is far from the street.

Amba’s main event is its falafel sandwich. The chickpea ball foundation is traditional and well-executed — freshly fried, good exterior crunch, not too dry, just a little garlicky. Its airy pita pocket exterior is bulked out with a lightly dressed cabbage slaw, diced tomato and cucumber (aka Israeli salad), and loads of hummus and tahini. The pita walls are no match for so much moisture, but luckily I was seated at a table. On the street, I would’ve had to fork my sandwich off the sidewalk.

Less common but truer to its Israeli roots (you wouldn’t find hummus in a Middle Eastern falafel sandwich) is Amba’s sabich, a fried eggplant sandwich. It has similar fixings to the falafel, with the addition of boiled egg halves and the subtraction of hummus. Upside: The hot, oily eggplant flesh is delicious, and the lack of hummus makes the sandwich durable. Downside: All the components are compartmentalized, so I’d get one bite of only egg, then slaw, then tomato and cuke.

Amba makes a strong hummus, fluffy and light, with a spritz of lemon and a touch of garlic. Hummus bowls are served a little warm, topped with olive oil and paprika, as well as warm fava beans, fried eggplant, or fried mushrooms and onions. With warm pita on the side, this one is better for sharing than downing solo.

Another share plate, the $20 mezze platter, highlights Amba’s inconsistent pricing. Yes, you get many different items on one plate (falafel balls, dolmas, baba ghanoush, beet salad, etc.) but the portions are small and mashed together. Also overpriced are the $10 shakshuka, two poached eggs in tomato sauce, and the $8 mozzarella tostim, essentially a grilled cheese pita. When you can get a gut-busting falafel sandwich for only $8.50, the prices don’t add up.

Also baffling was the pizza on Amba’s menu, as incongruous as lo mein or a burrito. Wornick winced when discussing this item, calling it a concession to his kosher clientele. It makes sense: Strictly observant Jews can’t grab junk food at non-kosher spots. And sure enough, on one visit I saw two Orthodox teenagers wolfing down olive pizza, fries, and fountain soda. Amba also has beer, as Amba’s Chabad clientele like to knock a few back over dinner. “We’re not Mormons here,” Wornick quipped.

He will likely add meat to the all-vegetarian menu starting after Passover in April — some kebabs, breaded chicken, maybe even a burger. Wornick calls this a painful decision, as he’s a twenty-year conscientious vegetarian, but it’s a response to customer demand. Which begs the question: What are Amba’s boundaries?

Since opening in late 2009, Amba has served as a test model in advance of Wornick’s planned empire-building. It’s attracted Jewish and gentile alike — Hebrew was peppered with English on both my visits — and Wornick tries to address the needs of both crowds. But at two Amba offshoots planned this year, he might not keep things religiously observant. It’s costly to shut down on Fridays and Saturdays, rabbis have to be brought in for regular inspections, staffers require special kosher training. For areas with a low Jewish population, Wornick says: “Why bother?”

Though his decision makes fiscal sense, I would argue that one of Amba’s principle charms is its authenticity. P.F. Chang’s and Chipotle suffer from being generic corporate imprints with only a faint whisper of their ethnic origins. Though Amba’s food is fresh and tasty, it bums me out to picture a whitewashed, non-kosher franchise in a food court in Stockton. Ain’t that America?

Russo’s Donations May Pay Off