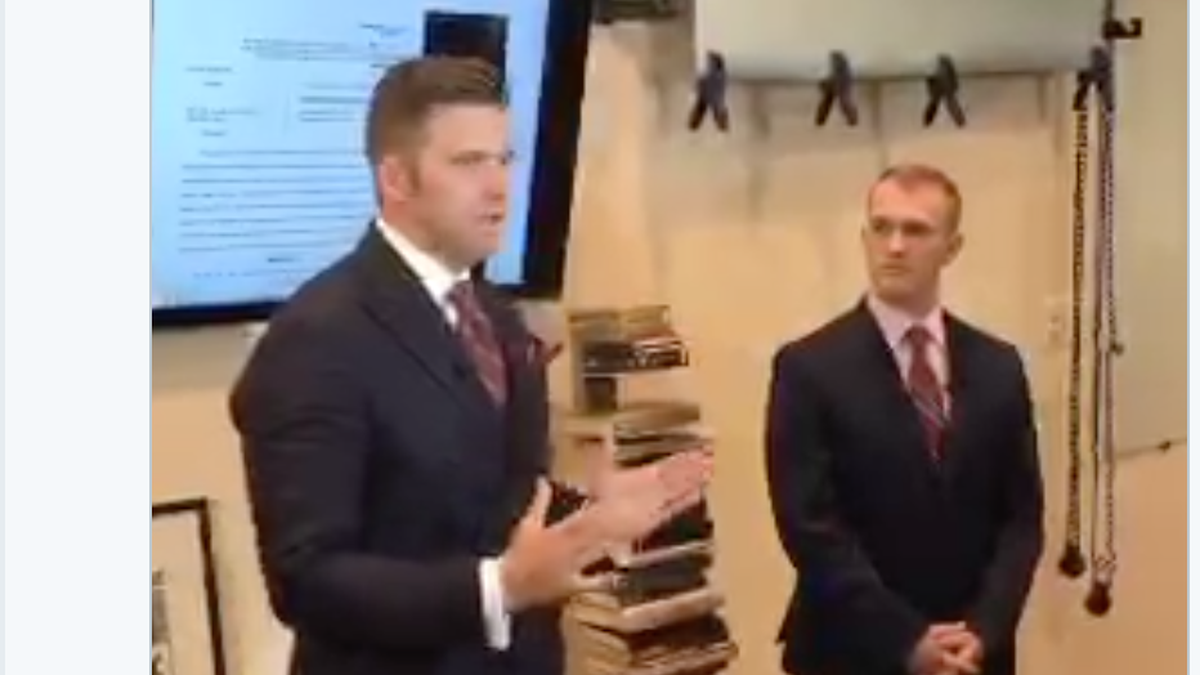 At about 10:40 p.m., the sheriff’s account retweeted a press conference held by Richard Spencer, the alt-right’s poster boy who has said in numerous interviews that he wants an all-white country. Also featured in the video is Nathan Damigo, founder of the California-based white supremacist group Identity Evropa.

Both men took part in the “Unite the Right” rally in Charlottesville, Va., over the weekend that resulted in the death of three people, including two state troopers and a woman who was struck by a vehicle driven by a white supremacist who attended the rally.

“You’ll have to understand that I was following a news link and it led to that press conference. I was trying to close out the screen and I somehow hit the retweet button at the bottom of the page,” Kelly messaged the Express. “It was accidental and I hope you understand that. It has been removed and I am much embarrassed.”

But the tweet remained up for more than an hour as Kelly frustratingly struggled to have the tweet removed from the office’s feed. He told the Express during those attempts that the retweet wasn’t appearing on their page while it was still visible to the public.

“I’m not a social media guru by any means,” Kelly said.

It’s not the first time the sheriff’s social media has drawn criticism. In May, a photo of a deputy sheriff arresting a fruit vendor went viral, and then the sheriff’s Facebook post about the event also went viral, with many accusing the sheriff’s office of unfairly targeting immigrants.

Screenshots of the sheriff’s retweet went all over the internet, as Twitter users and others questioned how it was accidentally retweeted, who was responsible for it, and why the sheriff’s office was watching Spencer’s press conference in the first place.

In a phone call to the Express, Kelly said the department’s social media activity had investigative purposes.

Kelly said he was researching Damigo, a white supremacist who was featured in a KQED report yesterday as having played an instrumental role in organizing the Charlottesville rally. Damigo told KQED that he is planning on another rally with Spencer in Berkeley.

Damigo is known for punching a woman in the face during the April 15 “Battle of Berkeley,” the violent and bloody clash between the alt-right and antifa protestors. He has not been charged yet with a crime, however.

Various alt-right, Nazi, white supremacists, and other hate groups are planning another rally in Berkeley on Aug. 27.

Kelly said he and other area law enforcement officers are concerned about the possibility of more violence, especially after the deadly events in Charlottesville, which included a white supremacist ramming his car into a crowd and killing Heather Heyer, a 32-year-old paralegal.

As to the content of Spencer and Damigo’s message, Kelly said, “Our department doesn’t support that kind of bullshit.”

Next ArticleLate-Night Cheese at Azit