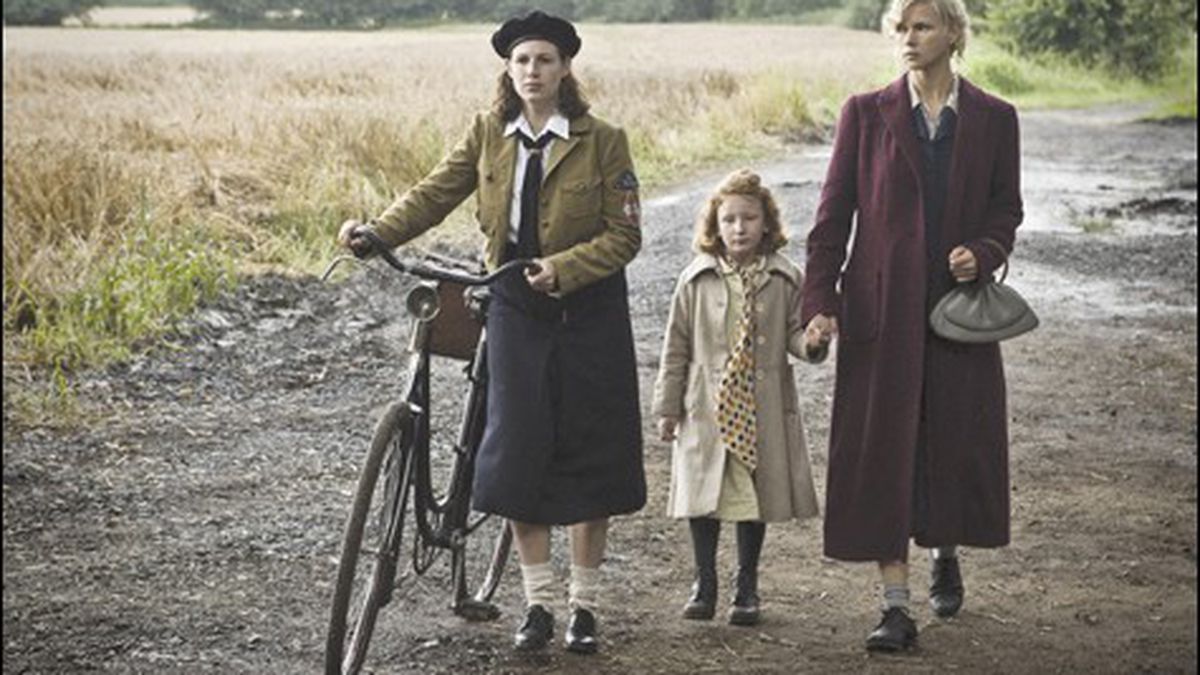 After the Quake At the Jewish Film Festival

The festival bounces back, (almost) as provocative as ever.

Around the Jewish Film Festival, people refer to it as “the earthquake.” The 2009 edition of the annual festival dared to program Rachel, filmmaker Simone Bitton‘s documentary investigation into the death of 23-year-old American peace activist Rachel Corrie in Gaza in 2003, which occurred while Ms. Corrie was attempting to block an Israeli military bulldozer from destroying Palestinian homes and other buildings.

The doc, a Belgian/French production, offered what the festival called “an unflinching examination that refuses to exculpate or equivocate.” But some people saw it as unwelcome anti-Israel propaganda, compounded by the festival inviting the dead activist’s mother to speak after the screening of the film — a reportedly raucous evening at the Castro Theatre. By the time the tremors subsided, half the San Francisco Jewish Film Festival’s board of directors had resigned and the fest’s program director had stepped aside.

What else would we expect from one of the Bay Area’s (the world’s?) feistiest, least predictable, most defiantly open-minded film fests? You could look it up. In its thirty-year run, the SFJFF has courted controversy with an ardor unmatched by any other “special-interest” ethnic film event. The festival is one of the least-impressed-with-perceived-political-power arts events in the whole contentious Bay Area. If it’s not offending someone, somewhere, it’s not doing its job. And really, who would want it any other way?

The ground has finally stopped shaking. The SFJFF’s new program director is Jay Rosenblatt, a San Francisco filmmaker and educator whose idiosyncratic, highly personal “documentaries” are, at least nominally, the furthest thing imaginable from agitprop front-line reports like Rachel. In such films as The Smell of Burning Ants, Human Remains, and King of the Jews, Rosenblatt takes his particular segment of the cultural debate up to the cosmic level, with editing that Sergei Eisenstein could admire.

He’s an unusual choice, maybe the ideal choice, to program a film festival that’s still licking its wounds. Amid an atmosphere that executive director Peter Stein describes as “very polarized,” the Rosenblatt Effect is to soothe the nerves while simultaneously stimulating the artistic restlessness we’ve come to expect from this festival. The 2010 tagline is “Talk About It.” And the films do.

A similar nostalgic impulse informs Peter Miller‘s fun, informative documentary Jews and Baseball: An American Love Story. Baseball fans, did you know: that Hall of Fame shortstop Lou Boudreau was half-Jewish? That the music for “Take Me Out to the Ball Game” was composed by Tin Pan Alley songsmith Albert Von Tilzer, a Jewish non-fan? That infielder Moe Berg spied on the Japanese military while playing in that country before WWII? That the Boston Red Sox’ current crowd-pleasing first baseman, Kevin Youkilis, is Jewish? Find out more, and bask in the reflected glory of Hank Greenberg, Sandy Koufax, and Shawn Green, when Jews and Baseball screens at the Roda on August 1.

It’s easy to get an ironic laugh by stating that no Jewish film festival, anywhere, has ever been put on without at least one Holocaust pic. For better or worse, they’re a staple of the industry. The SFJFF’s 2010 crop of Holocaust films tend toward the “better” end of the scale, with German director Ludi Boeken‘s Saviors in the Night leading the way. Boeken’s naturalistic, gorgeously produced 2009 drama tells the true story of a village of goyishe farmers in southwestern Germany who risked their lives by sheltering Jewish families, including the surprisingly blond and Nordic-looking Marga Spiegel (played by Veronica Ferres) and her young daughter Karin, during the Nazi era. The plain-spoken bauern did it because it was simply the right thing to do. As part of the festival’s opening night screening of the film at the Castro, survivor Spiegel appears in person.

The basis of Yael Hersonski‘s Israeli-produced documentary A Film Unfinished is a German propaganda film from 1942 titled simply The Ghetto. In that macabre original film, shot by German military camera crews inside the Warsaw Ghetto, staged scenes of “Jewish luxury” (with scared extras doing what they’re told at elaborate “parties”) alternate with street scenes of miserable, starving Jews living and dying on the crowded sidewalks. The Nazis’ object appears to have been to capture what they fancied to be the “Jewish folk character,” and the Germans poured serious effort into the project. For audiences with delicate sensibilities, filmmaker Hersonki’s assembling of the original footage, with its tell-tale outtakes showing that even atrocities were subject to stage direction, may well prove unbearable. For serious Holocaust junkies only. At the Roda on August 1.

Arguably even more unnerving than A Film Unfinished is War Against the Weak, American Justin Strawhand‘s documentary essay (based on the book by Edwin Black) on the eugenics movement. That socially destructive pseudo-science — which gained popularity in the US in the early 20th century and attracted the support of an alarming number of “leading Americans” (with names like Carnegie, Rockefeller, Ford, and Kellogg) ostensibly bent on corporate philanthropy — sought what it termed “the self-direction of human evolution.” That meant the “cleansing” of the lowest ten percent of the population — mental defectives, criminals, degenerates, the poor, etc. — in favor of the “advanced” white race. It was eugenics that introduced the world to the label “subhuman.” The film claims that the Binet-Simon Test for Intelligence, the IQ test, and the SATs are products of the movement, designed to demonstrate Nordic superiority.

In the US, eugenics was all about keeping down blacks as well as the “dark” recent immigrants of the time, but the movement’s German admirers quickly turned it against Jews, Gypsies, and other “diseased” minorities in their midst. Infants were euthanized, “morons” were eliminated, camps were constructed, and men with cranial measuring devices began appearing at schools. Eugenics, later renamed genocide, was indeed a shocking example of “bad science at its worst,” and Strawhand’s morally wearying but historically necessary film pillories it for all to see. It shows at the Roda on August 4.

Two European Holocaust films, Marek Najbrt‘s Protektor and Robert Guédiguian‘s Army of Crime, are practically a walk in the park after A Film Unfinished and War Against the Weak, but it’s worthwhile to see how filmmakers from the Czech Republic and France, respectively, handle the familiar situations of guilt, victimization, and violence. Protektor artfully presents a series of small humiliations inside a larger humiliation: the Nazi occupation of Prague, as experienced by a blond Jewish movie star played by Jana Plodková. Army of Crime refers to the French Resistance, and a group of communists and Jews who begin their protests with leaflets and progress to bombings and assassinations. Protektor is at the Roda on July 31; Army of Crime is only at the Castro, July 28.

For those experiencing indigestion from a steady diet of Holocaust pain, Bob Richman‘s documentary Ahead of Time arrives as a ray of sunshine. It’s the chronicle of Ruth Gruber, a remarkable reporter who specializes (still; she’s 98 years old) in breaking down barriers and getting the story, whether it’s becoming the youngest person to earn a Ph.D (at age twenty), exploring the Soviet Arctic, or helping to rescue WWII refugees on their way to Palestine to found the state of Israel. See it at the Roda, August 7.

Two musical docs, The Klezmatics: On Holy Ground (Roda, July 31) and The “Socalled” Movie (Roda, August 7) are well worth seeing for klezmer and hip-hop fans. Also noteworthy: Tali Shalom Ezer‘s sexed-up character study Surrogate, and Dorit Zimbalist‘s doc portrait of a Palestinian comedian/teacher, Sayed Kashua: Forever Scared, both from Israel; Ilusiones Ópticas, a humorously quirky look at provincial life in Chile; and, from Argentina, Anita, the story of a young Down syndrome patient who finds herself alone on the streets of Buenos Aires after a terrorist bomb attack.

This year’s SFJFF is unlikely to offend anyone in its efforts to show the diversity of the Jewish experience around the world — but don’t necessarily count on that. This festival was born to question authority. That’s part of the reason it’s consistently one of the very few “musts” on the Bay Area cultural calendar. Tell them Dopey Benny Fein sent you.&#8;

Good Enough for Obama, But Not Jerry Brown

The Right Side of History

Fracking Insanity in a Drought