Just two years ago, Oakland schools taught English and basic literacy skills to more than 25,000 adults annually. Next year, it might not help any. 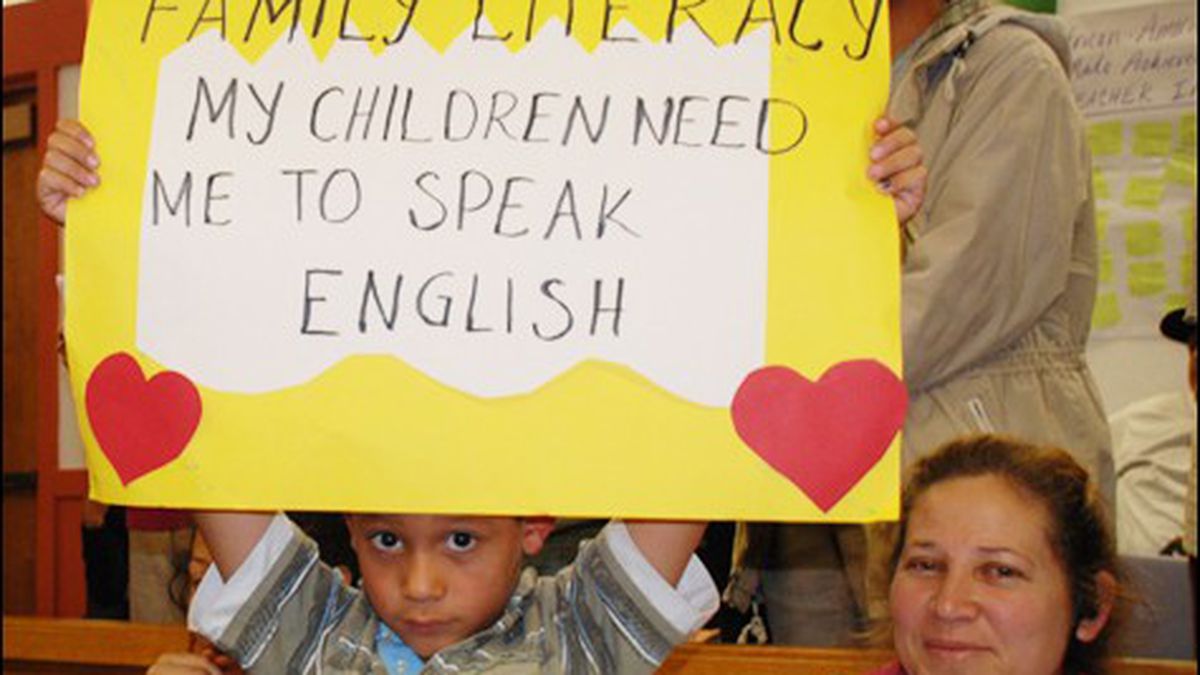 Oakland is the seventh largest recipient of adult education funding in California, but its once plentiful slate of programs has been almost entirely decimated. Millions of dollars that were once earmarked for adult education have been redirected to fund K-12 programs, a move that was prohibited by law until two years ago when the state legislature allowed districts to use adult education funds to ease the burden of a nearly 20 percent cut in overall spending. The move devastated adult education throughout California, but particularly in Oakland, a school district that has faced financial hardships for decades and before 2009 had one of the state’s most robust adult ed programs.

Adult education traditionally has been designed to help recent immigrants, refugees, high school dropouts, ex-convicts, and elderly or disabled individuals. Its programs have been geared toward ensuring that those who lacked the education necessary to succeed in the workforce could learn how to read and write, how to speak English, or even earn a high school diploma. Offering support structure for adults had been considered important in California, where 123,651 high school students dropped out in 2006-07, according to a 2009 study by UC Santa Barbara, and 23 percent of adults lack basic literacy skills, according to a 2003 study by the National Center for Education Statistics.

Oakland’s situation is not unique; many districts have slashed adult education funding since the 2009 changes. In the first year after California allowed school districts to redirect adult education funds to K-12 programs, adult education enrollment plummeted 36 percent statewide, from 1.2 million students to fewer than 800,000. Statewide Adult Education Administrator Debra Jones estimated that they have fallen even further since. “We believe we are at about the 50 percent mark of where we were two years ago,” she said.

Indeed, the dismantling of adult education throughout California is casting serious doubt as to whether the state will be able to adequately train its workforce in the coming decades. It also raises troubling questions about the fate of hundreds of thousands of adults in the state who can’t read or write or speak English.

Those issues are particularly acute in Oakland, a city with a huge immigrant population and a public school system with traditionally high drop-out rates. Moreover, maybe no school district in California has dismantled adult education as rapidly as Oakland. Its program used to serve more than 25,000 students, but in the 2010-11 school year it served fewer than 2,400, and likely will enroll even fewer in the upcoming school year — possibly none at all. “I think Oakland is the largest program with the largest hit in California, percentage-wise,” Jones said.

Oakland Unified School District has already redirected nearly $10 million away from its adult education budget, and has proposed cutting the remaining funds by an additional $3 million for the upcoming school year, leaving just $1 million. If the cuts go through as expected, Oakland will have slashed its adult education program by more than 90 percent in just two years.

Grappling with statewide education cuts and payments on a $100 million debt owed to the state since 2003, Oakland’s Board of Education has been forced to make uncomfortable decisions. “These are Faustian choices we’re grappling with here,” noted board Vice President Jody London at a May 11 board meeting. She said she was interested in figuring out whether the district could pare back the program dramatically while still leaving some structure intact to resurrect it later.

At the same time, the destruction of adult education in Oakland represents a major change for the city. Oakland was home to California’s first dedicated adult school in 1965, and has offered English classes for immigrant adults since the 1880s. But in the 2011-2012 school year, Oakland will likely have no functioning adult school, offer no English as a Second Language classes, no vocational or career training, no programs for the elderly and disabled, and few, if any, GED classes.

The most drastic cuts to adult education came last year, when several schools long tasked with serving Oakland’s adult community closed, including two popular decades-old campuses, Neighborhood Center Adult School and Edward Shands Adult School. “Every time we go back to Shands to get something, people come out to the parking lot and ask when we’re opening back up,” said Patricia Jensen, a former teacher at Edward Shands. Jensen had been teaching science and English as a Second Language at Shands since 1973 but will take an early retirement at the end of this school year.

The possibility of Shands reopening in the future appears to be distant at best. At the May 11 meeting, Deputy Superintendent Maria Santos outlined a detailed proposal to cut adult education by the aforementioned $3 million to fund new high school literacy programs and expand advanced placement classes for high school students.

While a final decision on the cuts is still pending, Oakland’s adult education staff is braced for more layoffs and the elimination of the few remaining English as a Second Language classes, along with the closure of the Bond Street Annex school, one of the last sites dedicated to adult education. For the remaining $1 million in the adult ed budget, the board is considering several options, including eliminating GED programs entirely in favor of the highly successful Family Literacy program, and even killing adult education altogether.

The board, however, wants to save the Family Literacy program, because of its effectiveness and impact on K-12 education. Unlike English as a Second Language classes, which are open to all adults, Family Literacy exclusively teaches English to immigrant parents of district students, and focuses on helping parents play a larger role in their children’s education.

Sam Davis, a Family Literacy teacher, said that a pregnant woman once approached him for English classes and he was forced to tell her, “not yet.” “There’s a big population that really needs English classes,” Davis said. “That used to be seen as important, getting people ready for the work force, new job skills, refugees that got placed here as part of a refugee resettlement, but they don’t have kids so they can’t take part” in Family Literacy.

Davis has asked the school board to limit funding cuts to adult education, and leave the program with $1.7 million for the 2011-12 school year to prevent teacher layoffs in Family Literacy. As for English as a Second Language, there likely will be no funding for it, unless it comes from Sacramento. “We’ve given up on that,” Davis acknowledged.

Two of the remaining English as a Second Language classes in Oakland are taught at the Lao Family Community Center by Larry Viles and Jim Knebelman. They each teach daily classes of forty to fifty immigrants and refugees from countries such as Sri Lanka, Myanmar, and Bhutan. “Of course the children should be the first priority,” Knebelman said, but he pointed out that while his students may not have children in the district, they may be uncles, aunts, or older sisters and brothers of district students, and need to learn English to get jobs. “It’s surprising the administration in the district has lost sight of that,” he said.

Students and employees of the Lao Center attended a May 25 meeting of the school board to speak out on behalf of adult education. Su Dung, who came to California from Myanmar ten years ago, spoke passionately for the continuation of English as a Second Language classes in Oakland. Dung attended adult school in Castro Valley, and now works helping fellow immigrants and refugees at the Lao Center. “Without ESL education I wouldn’t be here to give back to the community,” she said.

Teachers at the Bond Street Annex school, a small building with three classrooms that also offers computer classes and helps adults get their high school diplomas, are braced for the school’s closure in a few weeks. Jessie Ortiz taught English as a Second Language at Shands until it closed last year, and is now teaching GED classes at Bond Street. Last year, she voluntarily taught English at a nearby church when the district’s summer schools were closed. “I couldn’t stand it,” Ortiz said, “I was so depressed I went to church and asked, ‘Could I please just open my own ESL space?'” The class immediately filled up. “People still need ESL really badly,” she said.

Other Bay Area districts are struggling to keep their adult education programs afloat as well, and demand has increased as Oakland adult students look elsewhere. “The impact of Oakland’s cuts has hit Alameda pretty hard,” said Alameda Adult School Principal Thomas Orput. Despite cuts of about 30 percent from its $1.1 million budget, Alameda adult education has continued by charging fees for classes and through revenue generated by a parcel tax. But the smaller school, where English as a Second Language comprises about a quarter of its 4,000 student enrollment, doesn’t have the resources to educate everyone that tries to learn English, and turns many students away. “We have a waiting list,” Orput said. “How do I deny someone a public education?”

California’s budget problems are not likely to end soon, and as school districts struggle to keep up with the needs of K-12 education, adult ed will remain an enticing avenue for extra funding. Oakland adult education administrator Brigitte Marshall said that ultimately the question of funding will need to be solved at the state level, and that state legislators have passed off their responsibility to the individual districts. “We have to call for a really comprehensive analysis of how to provide services” to the millions of people that adult education used to serve, Marshall said. “I don’t see how this state could not provide for those kinds of services. It would be an economic disaster not to provide these services.”

Next Article“Reefer Madness” Case for ‘L.A. Noire’ Readied by Rockstar