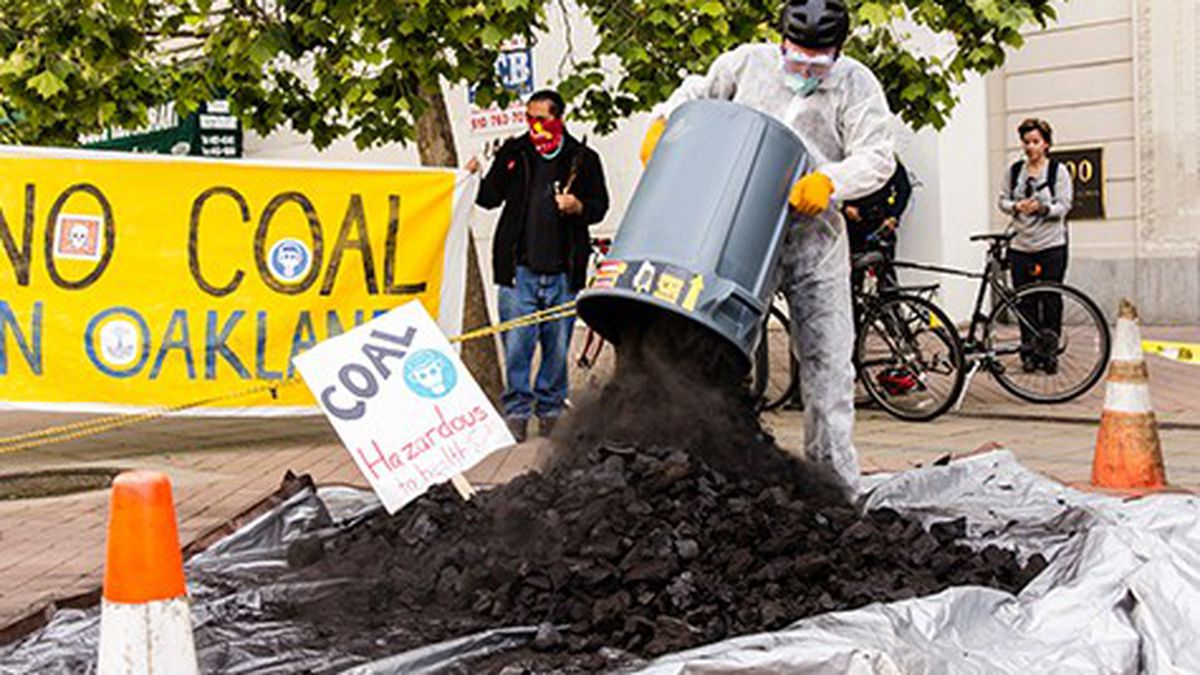 A coalition of environmentalists and city leaders is attempting to block a planned coal-exporting facility in Oakland and the export of coal through a terminal in Richmond.

On May 14, protesters rallied and dumped “coal” (charcoal, actually) in front of the downtown offices of Phil Tagami, developer of the former Oakland Army Base. It was the first public action in a campaign by Oakland environmental groups and city leaders to stop a new plan to export coal from Oakland. They learned in April that the developers of the Oakland Bulk and Oversize Terminal (OBOT), being built on the former Army base site, are negotiating to export coal from mines in Utah.

Under the pending deal, a Utah state agency would invest $53 million in building the OBOT in exchange for the right to use nearly half the terminal’s capacity to export products from four counties in Utah. “In our neighborhood, that means coal,” said Malcolm Nash, economic development director of Sevier County, Utah.

Coal mines in Utah and other states are scrambling to find international markets for their products at a time when coal-fired power plants in the United States — including the one near the Utah mines — are closing. Those plant shutdowns are due to the fact that burning coal produces toxic emissions and contributes more to climate change than any other fossil fuel. In addition, during shipping and handling, coal emits toxic dust that increases the risk of lung disease and other health problems.

Last week, the Richmond City Council passed two resolutions aimed at curtailing the export of coal and petcoke (a toxic petroleum product that can be used as fuel) from the Levin Terminal in Richmond.

Oakland Councilmember Rebecca Kaplan, who spoke at the May 14 rally, said, “This is an issue both of the global system and of local environmental injustice. We can’t afford to make it harder for our kids to breathe.”

Kimberly Moses, president of the Service Employees International Union Local 1021 chapter at the Port of Oakland, added: “There are already issues with West Oakland residents experiencing health problems from pollution at the port. And we work there!

“Why are we even still burning coal when there’s renewable energy?” she continued. “This is 2015, not 1910. There’s many more resources we can develop. God already gives us what we need. We don’t have to keep destroying the earth for profit.”

Advocates for the coal terminal have said that dust won’t be a problem, because they plan to ship the coal in covered rail cars and unload it inside a closed facility. But Jess Dervin-Ackerman of the Sierra Club expressed doubts. “Nobody in the US currently transports coal in closed cars,” she said. “And they still have to transfer it from trains to the storage facility to ships. [Even if they unload coal in buildings] there are workers inside the building. They will have to ventilate it. There’s no way to 100 percent contain it.”

Last year, the Oakland Port Commission unanimously rejected a proposal to export coal through the Port of Oakland after vigorous opposition by community and environmental organizations. And in July, the Oakland City Council passed a resolution against shipment of fossil fuel through the city.

But in his public statement on the proposed coal terminal, Tagami noted that the city signed an agreement with his company authorizing it to build “a facility capable of handling all foreseeable and legal bulk commodities.” Shipping coal is legal in the United States. It should be noted, however, that when the agreement was signed, Tagami was widely reported as saying he had no interest in shipping coal through the facility.

In response to the coal facility announcement, a coalition of environmental groups has gone into high gear to build opposition to the OBOT. In addition to the May 14 rally, the groups sent a squad of canvassers to knock on doors in West Oakland last weekend and planned to hold a West Oakland community forum on May 26. They have also launched an online petition drive, and sent a letter to Mayor Libby Schaaf, who has previously expressed opposition to shipping coal through Oakland.

Meanwhile, Councilmembers Kaplan, Lynette Gibson McElhaney, and Dan Kalb are exploring ways to stop the plan. Kaplan, however, said that if the city council takes action against the coal project, “I don’t yet know whether it will be legally enforceable.”

Officials in both Oakland and Richmond say they’re unsure about their legal jurisdiction over shipping. “If it’s something that can legally be transported, I don’t think we can keep it out,” said Richmond Mayor Tom Butt. He pointed to a clause in the US Constitution that gives the federal government control over “interstate commerce.” That clause is the reason why only the federal government can regulate railroads. But environmental lawyers say the question of jurisdiction over shipping is less clear.

West Oakland environmental leader Margaret Gordon, a former member of the Oakland Port Commissions, argued: “It’s public land. That puts it under the jurisdiction of the city council. … The most important thing is: Will the city go past a symbolic ordinance? Is the city committed to using the resources they have to stop this commodity from coming through here?”

In Richmond, the city council passed a resolution on May 19 committing the city to use every legal tool available to restrict the transport and export of coal and petcoke, as well as to lobby state and federal officials for further restrictions. The resolution states that the city opposes “the mining, transport, and burning of coal” and bars coal from city-owned property. It also calls on Governor Jerry Brown to order a comprehensive statewide analysis of the “cumulative impacts” of shipping coal.

A separate resolution asks the Bay Area Air Quality Management District to adopt stricter regulations about the handling of coal and petcoke, including a requirement like the one in Southern California that requires the materials be stored in covered containers.

At the Richmond council meeting, Andres Soto of Communities for a Better Environment said: “We’re shutting down coal-fired power plants. It’s illegal to burn petcoke here. And yet we’re allowing oil and coal companies to ship the stuff to places like China and Mexico with less stringent laws.”

Mary Roth of the California Nurses Association told the council she and other nurses had conducted a door-to-door health survey in a Richmond neighborhood near the tracks that carry coal trains. “The residents all have asthma, breathing problems, chronic respiratory disease,” she said.

The anti-coal campaigns in Oakland and Richmond join a movement that has so far stalled efforts to build coal-export facilities in the Pacific Northwest. Thousands of activists have packed public hearings and held demonstrations at construction sites, and a total of 27 cities in Oregon and Washington have adopted anti-coal resolutions.

Of the six coal-export projects proposed in Oregon since 2010, only two are still pending. Last summer, the Oregon Department of State Lands rejected a proposal by Ambre Energy to build a coal export terminal on the Columbia River. Meanwhile proposed coal export terminals in Washington are on hold while the Washington Department of Ecology conducts a statewide study of the cumulative impacts of mining, transport, and burning coal.

Rumi with a View