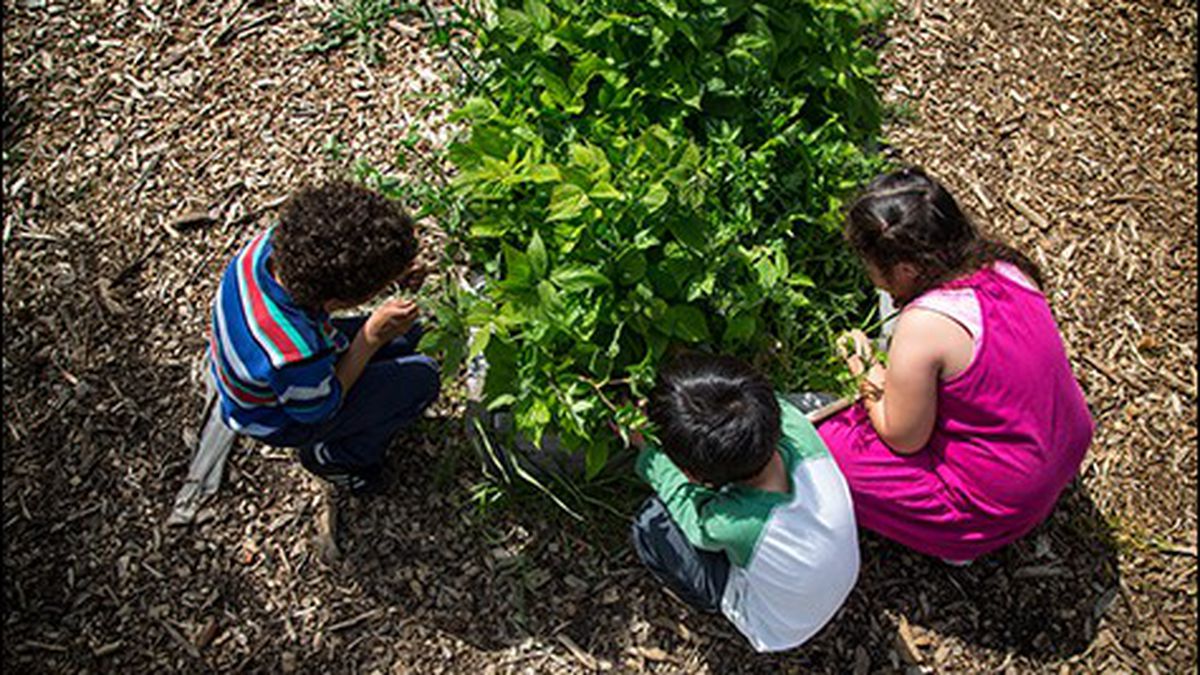 The proposed November ballot measure is designed to reduce obesity and provide funding to the city's celebrated school garden and cooking programs.

Before Kad Smith got a job as a youth intern at the Berkeley Ecology Center, he had never thought about nutrition. “I drank so much soda in the first eighteen years of my life it would appall people,” he said. “I ate all processed food, full of high-fructose corn syrup.” But the Ecology Center gave him a crash course on nutrition, while training him as a peer educator in its Farm Fresh Choice program. “When I found out what I had been nutritionally deprived of, I stopped eating Honey Buns and started eating more fruits and vegetables,” Smith said. “I saw my energy go up, and my ability to focus in class — so I started going to class more.”

Smith was in high school at the time. Now he’s graduated from college, and is back working at the Ecology Center, helping to promote a campaign for a city tax on “sugar-sweetened beverages,” which includes soda, sweetened fruit juice drinks, and energy and sports drinks.

The Berkeley Healthy Child Coalition, which includes a wide range of community organizations, parents, people from the Berkeley Unified School District, and retirees and other former members of the Berkeley Public Health Department, is working to get a measure on the November 2014 ballot that would charge distributors a one-cent-per-ounce fee on sugary drinks sold in the city. The idea is to use the money to restore funding to school and community nutrition education programs, including Farm Fresh Choice and Berkeley’s celebrated school garden and cooking programs. Federal funding for these programs was cut to “an unmanageable level” last year, said Dr. Vicki Alexander, retired director of the Berkeley Maternal, Child, and Adolescent Health program.

The proposed ballot measure is also motivated by the conviction — now a consensus in the scientific and public-health communities — that drinks with lots of added sugar are major contributors to rising levels of obesity and diabetes. They also increase the risk of heart attacks, high blood pressure, and liver disease.

Research shows that sugar-filled beverages affect the body in a special way. In natural foods, sugar is combined with other substances like fiber and protein that take the body longer to absorb. When people drink beverages with large amounts of pure sugar dissolved in water, the sugar is absorbed so fast that “spikes in blood sugar can overwhelm the body,” according to the Center for Public Health Advocacy. So much sugar going into the body so fast leads to a sudden large rise in insulin, causing the body to turn the sugar straight into fat, especially in the liver. That not only promotes obesity but also leads to the development of diabetes. High-fructose corn syrup, a form of sugar in many sweetened beverages, is especially likely to have this effect.

Advocates for the Berkeley tax measure say soda consumption is not only a health issue, but also a social-justice issue. Both consumption of sugar-sweetened beverages and rates of diabetes are much higher in communities of color. And while the consumption of sugary drinks has gone down among some populations, California teenagers of color — Black, Latino, and Asian — tend to drink large amounts of sugar-sweetened beverages and the amount they consume is going up, according to a recent study by the UCLA Center for Health Policy Research. The rate of diabetes among teenagers is also growing rapidly. Nationally, 23 percent of teens now have diabetes or pre-diabetes, up from 9 percent in 1999, according to Harold Goldstein, director of the Center for Public Health Advocacy. Lower-income people are also more likely to drink a lot of sugar-sweetened beverages than higher-income people.

That’s why leaders of the African-American and Latino communities are core members of the coalition promoting the Berkeley tax. “According to the Berkeley Health Status Report, African Americans have a higher level of diabetes than any other grouping in Berkeley,” said Monsour id-Deen, head of the local NAACP. Asian Americans have the second-highest rate. “The City of Berkeley has talked for a long time about dealing with health inequities,” id-Deen added. “The soda tax would be a good way of addressing this.”

Xavier Morales, Berkeley public-school parent and executive director of the Latino Coalition for a Healthy California, said diabetes is an epidemic in communities of color: “In the Latino and African-American communities, half the children born since 2000 are expected to get diabetes in their lifetime.”

People of color, Morales said, drink more sugar-sweetened beverages because of their “food environment. If you map poverty and places without full-service grocery stores, you see these are all Latino and black areas. And youth of color are specifically targeted by advertisers.”

Lori Dorfman, director of the Berkeley Media Studies group, monitors marketing-industry publications. “They say they are aggressively marketing to youth of color,” she said, referring to beverage companies. “They’re responding to the new demographics” — people of color are an increasing share of the population. “They want to get the attention of kids so they can develop brand loyalty, keep them coming back in the future, when they have kids. They exploit cultural identities, use familiar symbols, music, images.”

Latino and African-American teens, as a result, see almost twice as many ads for sugary drinks as white kids do. And, Dorfman said, “research shows that youth of color are more influenced by marketing than their white peers, maybe because people of color are not included in mainstream culture, so they pay more attention to messages that do reflect them.”

The Berkeley Health Department has been working with community groups on chronic disease and nutrition for fifteen years, said Alexander, who was then a director in the health department. At that time Berkeley had started producing Health Status Reports showing major health disparities by ethnicity and income. Back then the department “hired the first person to focus on chronic disease and nutrition, highlighting the weight issue and diabetes,” Alexander said. One of the results of these efforts, she added, was to get federal funding for the Berkeley schools’ nutrition programs, featuring school gardens and cooking classes.

In the spring of 2012, when parents learned that the federal government had pulled the plug on these successful and beloved programs, they mobilized. Health and school officials and city council members joined in. By last fall, Alexander said, “We became quite formidable, so we had to give it a name,” and the Berkeley Healthy Child Coalition was born.

The group brainstormed about how to raise funds for school and community nutrition education programs and came up with the idea of a soda tax. The tax would not only raise funds, but also raise the price of sugary drinks to discourage people, especially youth, from buying them. This approach works, said Dorfman, pointing to the example of tobacco: higher tobacco prices have been shown to correlate with reduced sales.

In three polls, one commissioned by the Healthy Child Coalition and two by the city council, Berkeley voters expressed strong support for the proposed measure. Councilmembers Linda Maio and Laurie Capitelli have been active in the coalition. Councilmember Max Anderson spoke in favor of the measure when it came before the council in May. “I’m a diabetic myself,” Anderson said later in an interview. “And I’m a retired [nurse]. I worked for years in the critical care unit at Summit Hospital. I’ve seen the ravages of diabetes and the impact it has on families. This is preventable!”

The city council is expected to approve the final language and vote to place the measure on the ballot soon. Activists are also gearing up for a fight against Big Soda. In 2012, the beverage industry spent $2.7 million to defeat a tax on soda in Richmond. “The industry has very deep pockets,” Morales said. “They can afford to mount a huge defense.” San Francisco is also considering a soda tax measure for the November ballot.

“The public health community is already doing a lot to improve safety in the community so people can exercise outdoors, to improve access to fruits and vegetables,” Morales said. “But just raise the specter of decreasing consumption of sugar-sweetened beverages and the gloves come off. There’s an onslaught of money to stop us.” In addition, he said, “a lot of organizations won’t come out and support us because industry people are on boards everywhere. They fund everything in the community.”

In San Francisco, Morales said, beverage industry operatives have formed the “Coalition for an Affordable City” and have been recruiting small business owners to oppose the tax. In Berkeley, Big Soda recently conducted a “push poll,” an attempt to influence voters under the guise of conducting a poll. When the measure goes on the ballot, Morales said, “We expect a very intensive campaign.”

Roger Salazar, of the industry-supported Californians for Food and Beverage Choice, said opponents of the Berkeley tax are keeping an eye on the campaign and are waiting to decide on a strategy until the exact language of the measure is finalized.

But, Salazar said, his organization plans to emphasize that “a new tax is the last thing local businesses and families need.” He also sounded an anti-big-government note: “When it comes to food and beverage choices, families don’t need government input. It’s up to consumers to make responsible choices for themselves and their families.” He said that’s one of the reasons previous efforts to pass a tax on sugary drinks — in El Monte and Richmond — failed. “There are a lot of things people should be aware of in their diet,” he added. “They don’t need the government punishing them for their choices.”

Supporters of the Berkeley tax measure said they are aware of the power of the soda industry but are determined to defeat it. “The beverage industry has hundreds of millions of dollars at their disposal,” said Councilmember Anderson. “But we have the well-being of our children on our side.” &#8;