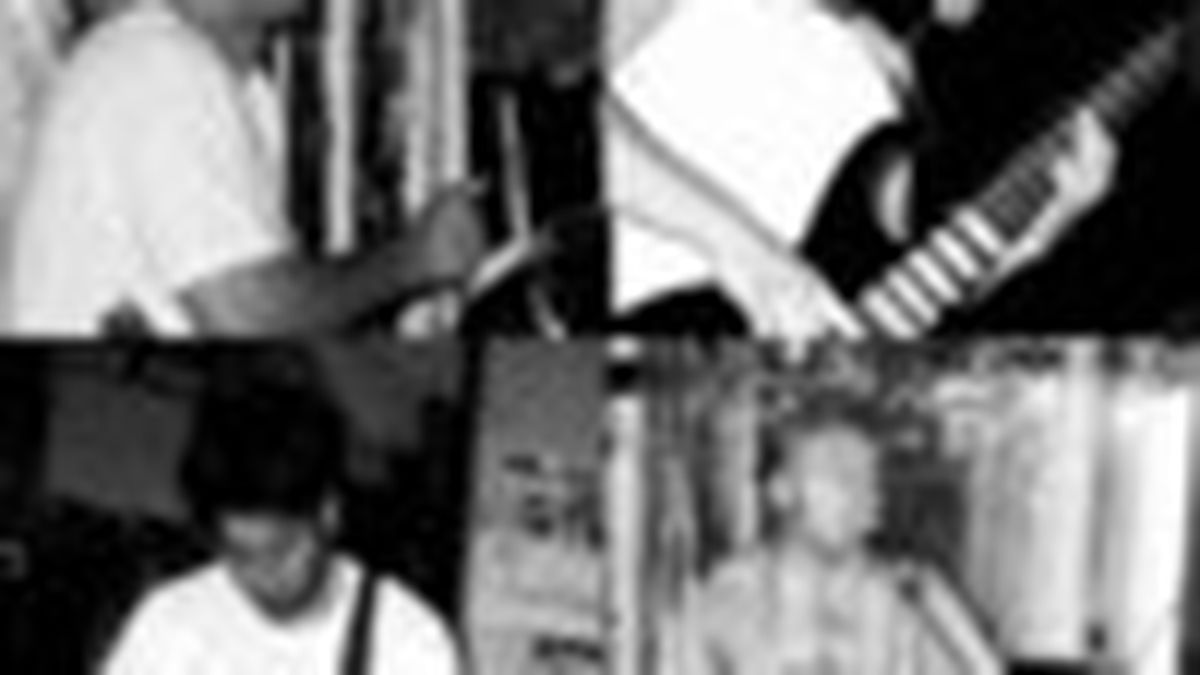 "No one's trying to get laid or be a big shot. We just love playing music."

October Allied are not rock stars, despite singer Scotty Quay’s big hair and guitarist Greg Stults’ similarities to the small, sexy man formerly known as Prince. They are four regular — albeit strange — guys who make music for a regular — albeit strange — audience, much like their influences Frank Black, the Pogues, and the Clash. It’s not music for outsiders, but it’s not music for cool kids either — it’s simply tough, sincere, goofy rock ‘n’ roll in the loosest sense of the term.

Sitting together on thrift-store couches in the front room of the flat that Quay, Stults, and drummer Rich Herr share in the vicious-dog-and-crack area of West Oakland, the boys discuss how their straightforward and gimmick-free approach has made it difficult to promote themselves. “It’s four guys with totally different tastes working together,” says bass player Chris McBride, taking a hearty swig of Natural Ice. “I can’t say we have much of an image — except maybe that of four drunk shut-ins?”

“Our biggest strength is that we don’t have a preconceived notion of what we should sound like or where we should fit in,” says Quay, emerging from a haze of pot smoke under a Guns N’ Roses decorative sheet. “We’re all old enough to be over our scenesterism, or any naive desire to ‘make it.’ No one’s trying to get laid or be a big shot. We just love playing music.”

October Allied’s songs are fast, ’70s and early-’80s style punk-rock explosions of energy and aggression with poppy, distortion-free guitar sounds from the ’50s. Over this catchy cacophony wails the whiskey-tortured vocals of Quay, whose rough ‘n’ raspy voice sounds like a working-class bastard son of Shane MacGowan and Mike Ness. “The throaty vocals are sung,” he clarifies, “not screamed.”

Most of the band originated on the East Coast and arrived in Oakland in the late ’90s. Quay, the tattooed and pompadoured singer, formed a reputation in Pittsburgh, PA by fronting the successful hardcore punk bands Necracedia and the Bad Genes, as well as various rockabilly, Irish folk, and acoustic projects. T-shirt and jean aficionado Stults and shy drummer Herr started the Dick Herr 5 back in Pittsburgh, which Herr refuses to comment on, “to avoid embarrassing myself.” McBride, who describes himself as the “resident asshole” in the group who “sings like a Wookie” is the only non-Pennsylvanian — he’s a Marine Corps brat from North Carolina who has lived in California the past fifteen years.

Once they all found one another at various East Bay bars and parties in 1999, the boys started jamming together. Needless to say, success has been hard won. “We tend to do well with bar staff,” jokes Stults as he returns with a forty from the fridge. “I’m not sure if this is because we are all such swell tippers, or if it is simply due to the sheer volume we consume.”

“It’s because they can’t get away,” laughs McBride.

“Seriously,” Quay interrupts, “It’s easier to tell you the kind of person who doesn’t like our music: people who are trying to get some sort of identity from belonging to this music scene or that. We don’t offer instructions on how to live or dress.”

“I just think that ultimately you can’t control how your band is going to be accepted,” says Stults, contemplating the Colt 45 in his hand. “To worry about that is pointless. Sure, it would be great to get to the point where we can get shows whenever and wherever we want. But I’m not sure how to go about trying to achieve that while still maintaining the focus on getting better at what we do.”

The band’s laissez-faire approach means they will probably continue to do things like record a new full-length album in their dining room and release it themselves through their Web site, or keep playing the local dive circuit hoping to charm some kindly bartenders out of their whiskey. “I think the era of bands like ours ‘making it’ with a big record deal, etc., is over,” says Quay. “The essence of punk to me is the DIY spirit — I don’t like what’s out there, so I’m gonna make my own thing, my own way. It’s great if someone else digs our music, but if not, that’s okay too.”