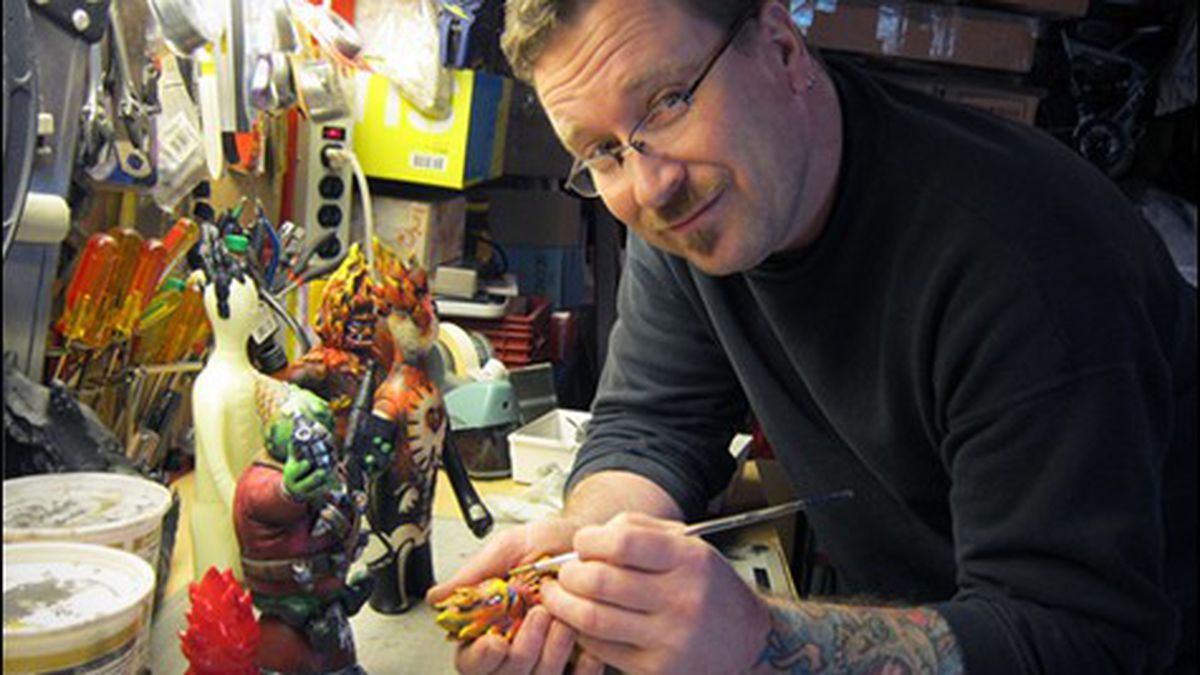 A Toy Worth Waiting For

Oakland "toy ruiner" Lee "Leecifer" Gajda finally gets his due.

Since the early-2000s, the Bay Area has been a mecca for art toys. With the help of companies like STRANGEco, local artists leapt from their canvases into the third dimension. Oakland-based artist Lee “Leecifer” Gajda remembers first seeing vinyl toys from Japan at Frank Kozik‘s San Francisco studio in 2001. It was just before Kozik changed careers from drawing gig posters to designing toys. “The toys I saw there really impacted me,” Gajda recalled. “There was a very urban and modern aesthetic to them.” Soon, toy art began popping up in San Francisco’s contemporary and underground art spaces, with limited-edition art toys following thereafter.

Inspired by artists like Kozik, Mars-1, Jeremy Fish, and Sam Flores, Gajda spent the next ten years painting over toys by all of his artistic heroes. Just as in graffiti culture, the art toy community recognizes those who play off of other people’s work. So Gajda turned Japanese monsters into comic book superheroes, added a third eye to a Barack Obama action figure, and applied clownface to a Ho Chi Minh bust. From 2008 to 2010, he amassed 83 pages of toys in his Flickr photostream, and for his efforts in toy customization, he earned the moniker “toy ruiner.” “Having gotten so much joy and met so many great people through this subculture of an art scene, I wanted to participate as fully as possible,” he said. And full participation meant releasing an original toy.

But making toys is complicated business. It can take upwards of a year, cost thousands of dollars, and require dealing with factories overseas. Even when a toy company handles the communication and risk for an artist, there are no guarantees. After a few unsuccessful years of trying, Gajda began to believe he was a “kiss of death” to toy companies: “I’d signed so much away trying to get stuff produced, investing a ton of personal time and effort only to have a toy company go belly up,” he said. “After three or four times, you start to think, ‘Well, crap, it must be me.'”

As it turns out, the right toy company was on home turf. On February 26, San Francisco’s Super7 will debut Gajda’s first original toy, Honoo the Flame, which will be released as part of Super7’s Monster Family series of vinyl toys. In addition to the debut of Honoo the Flame, the opening will feature fifty new customized toys and small canvases by Gajda. The show also presents the work of noted toy customizer Paul Kaiju.

For Gajda, the collaboration with Super7 was a natural fit. “I had been reading the Super7 magazine for some time without knowing they had a store in San Francisco,” he said. “Once I saw the type of products they produced, I really wanted to make a toy with them.”

Brian Flynn, owner of Super7, thought likewise: “Lee is someone who we have known for years as a customer, customizer, and friend. Over time, it became obvious that we needed to collaborate on a toy with him, and Honoo the Flame is the result. Honoo is a mix of our world and Lee’s world in a single figure. It pushed both of us into a unique design we couldn’t have come up with by ourselves, which is exactly what we wanted it to be.”

Judging by the sentiments of toy art enthusiasts, Gajda has no shortage of admirers. “Lee is a genuine artist who loves his craft and is damn good at it,” said East Bay toy artist Jay222, who bought a custom toy of Gajda’s last month. John Stokes, of the toy blog SpankyStokes.com, agrees: “Lee is so deserving of finally being preserved for eternity in soft vinyl. This new figure really just showcases a fraction of the talent he has to offer the art toy community.”

It may be hard to fathom how little toys could garner so much adoration, but Gajda stands apart for his signature dry-brushed painting style. Jody Tokioka of Honolulu has seventeen of Gajda’s custom toys in her collection. “I love his paint finish and the gold accents,” she said. And although Gajda’s Honoo the Flame has an airbrushed polish, that doesn’t give Tokioka any hesitation. “I’m looking forward to adding a custom Honoo toy to my Leecifer collection,” she said.

Though it took about a decade to produce his own toy, Gajda says the wait was worth it. He admits there were compromises along the way, but says that, overall, the Northern California toy scene has been supportive and friendly. “Look, a lot of really bad toys are single-vision products,” he said. “It takes a certain amount of back and forth, of distillation, to make a great toy. I made the toy I wanted to paint.”

Gajda certainly hasn’t been alone in his struggle. Fellow Oakland toy artist, Yosiell Lorenzo, had his first toy produced in 2010 after years of customizing. “A custom toy begins with a premade platform, so some of the work is already done for you,” he said. “A production figure is all your idea from beginning to end.”

When asked what advice he has for other people trying to break into art toys, Gajda said the key is fully immersing yourself in the culture. “What worked for me was finding a community that my wife, Michele, and I wanted to be part of,” he said. “Most of our friends are artists, writers, gallery owners, toy store owners, or creative types of some sort. I participate in and often curate as many art and toy shows as I can. I’m active on the various online toy forums, and I correspond with the associated blogs.”

And despite the fact that Gajda is finally producing his own toy, he isn’t abandoning his “toy ruiner” philosophy. “Everyone who buys one should take it home and fuck it up in every way imaginable,” he said. “There should be no production pieces left.”

Find The 2017 Best Of The East Bay Readers Choice Nominees...

Best Charitable Event: A glamorous fund-raiser for a very worthy cause