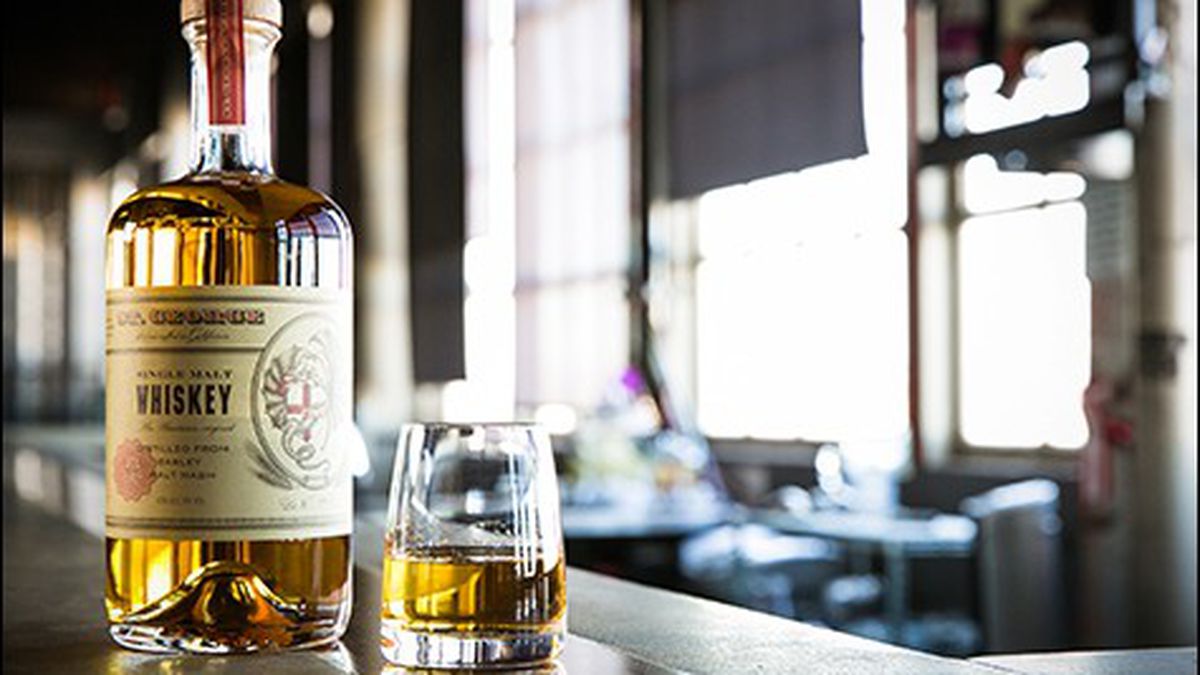 A Thirst for Whiskey

The opportunity to geek out over American whiskey abounds in the East Bay.

The bar at American Oak (2319 Santa Clara Ave., Alameda, 510-521-5862) looks like an altar to the whiskey gods: five shelves stocked with more than two hundred whiskies and bourbons. Customers can join the restaurant/bar’s whiskey club and taste their way through a dizzying list of spirits, the majority of which are American-made whiskies. Taking a note from wine-tasting culture, American Oak also offers flights of three half-ounce pours. A recent week’s special was an $8 vertical tasting of W.L. Weller wheat bourbon: a W.L. Weller Reserve, W.L. Weller 12-year, and Old Weller Antique 107 degrees.

Melanie Hartman, the co-owner of American Oak, said that when she reopened the bar a year and a half ago after recovering from a fire, the quickly changing bar scene convinced her to specialize in whiskey. “Now everyone has great craft cocktails and everyone is using fresh juices and getting artisanal spirits,” she said. “That’s not as uncommon as it was. So I started thinking, ‘What can I do to set us apart in the market?’ I had experience working in single-spirit-focused bars before, and so I said, ‘Well, this is kind of cool and there’s a hell of a lot of it. Plus, it’s the original American spirit.”

Just fifteen years ago, a whiskey bar with hundreds of bottles and weekly changing flights would have been almost impossible to find. From the Seventies to the Nineties, Jim Beam, Jack Daniels, and Old Overholt dominated the American whiskey market. Today, however, the opportunity to geek-out over American whiskey abounds in the East Bay, and many bars, in addition to American Oak, have started offering flights or guided tastings.

Chris Friend, the general manager of Hutch Bar & Kitchen (2022 Telegraph Ave., Oakland, 510-419-0622), a restaurant that specializes in Southern food and has a selection of more than sixty American-made whiskeys, said that after working as a bartender for many years, he never expected to see so many options. “The amount of brands that are out there now and widely available are so much more than I thought there would be,” he said. “Before there was Jim Beam, and then there was Maker’s Mark, and that’s all there really were. Pappy Van Winkle was around, but it wasn’t widely available.”

To understand this resurgence of American whiskey, one must look to both popular culture’s growing fascination with US history and the local food and wine movement that has swept across America in recent decades. The owners of whiskey-focused bars like Acme Bar & Company (2115 San Pablo Ave., Berkeley, 510-644-2226), Hutch Bar & Kitchen, and American Oak all admit (sometimes reluctantly) that TV shows like Mad Men and Boardwalk Empire have captured people’s imaginations and sparked interest in classic cocktails and American whiskey. That interest — paired with a growing enthusiasm for artisanal food, beer, and wine — was a natural precursor for the boom in craft and small-batch whiskey that we’re seeing today.

“After twenty years in this business, I’m more excited now that I was ten years ago,” said Jennifer Sideman, owner of Acme Bar & Company. “It’s fun!”

Sideman’s bar pours more than 160 different whiskeys, but she said if she wanted, she could stock up to 600, including European whiskies. In her opinion, this abundance of choice has been drawing people in, especially young people, and keeping them engaged with the spirit. An added benefit of the multitude of options is an impressive range of price and style: At Acme alone, there are thirty whiskies priced at $10 or less a shot. At the other end of the spectrum, Sideman regularly sells $200 shots of whiskey. “Not everyday,” she said. “But on average about a dozen a month. That’s enough to justify a collection.”

What consumers are starting to realize — and producers are re-learning to harness and market — is that whiskey, like wine, has a lot of variables that can make the spirit taste unique. As Sideman put it, whiskey is very terroir-driven, which means its taste profile is connected directly to the geographic location where it’s produced. This lends itself to the bottling of select single-barrel whiskeys, and provides the opportunity for a variety of blends, even from the same distillery.

Water is the vital base ingredient of whiskey, and is primarily why the best bourbon comes from Kentucky and Tennessee. The limestone-dominated soil in those states acts as a filtration system, leaving the water clean, pure, and full of calcium, and has the added benefit of encouraging the proliferation of yeasts. The commonly held belief that bourbon can only come from Kentucky and Tennessee is a misconception. It can be made anywhere in the United States. In fact, according to law, bourbon has to be made in the United States, include no additives, and be aged in new American oak barrels.

Another important building block of whiskey is the mash bill, or the types and percentages of grains (wheat, rye, corn, and barley) that are mashed, cooked, fermented, and distilled into whiskey. The increasing popularity of rye whiskies is another return down the path of American history: George Washington himself made a rye whiskey at a distillery on his Mount Vernon estate in Virginia.

Many of the largest distilleries were founded in the 1800s, but closed at the beginning of the 20th century due to Prohibition. Many of the historic distilleries that remained dormant for years, including Mount Vernon and Iowa-based Templeton, have been restored in the last decade and have started to produce whiskey again.

Meanwhile, people across the country are starting independent distilleries of their own and producing small-batch, craft whiskies. One of the pioneers of this growing trend is Lance Winters, the master distiller at St. George Spirits (2601 Monarch St., Alameda, 510-769-1601).

Winters started out as a beer maker with a longing to distill. After setting up a still in his garage and playing with different mash bills, he approached Jorg Rupf, owner of St. George Spirits, with the idea for a single-malt whiskey. At the time, however, he said the public wasn’t ready for something so unique. “When we first starting [making the single-malt whiskey] seventeen years ago, whiskey didn’t have the popularity that it does now, and the consumers’ palettes didn’t really accept something new, so the only way you could really break into the single-malt market back then was to make something that was just like something that already existed,” he said.

For the whiskey novice, the plethora of brands can be overwhelming, and when so many whiskies are produced by the same distillery, it can be hard to accept that each bottling is different enough to warrant its own label. After two decades making his single-malt, Winters has seen first-hand how small variations, including the barrel and aging time, can create distinctions, even from the same batch of whiskey. “Because of the fact that there are so many variables, and many of them have to do with little tiny biological entities — yeast — things can go a little different on every batch. And then, even if it didn’t, you put it into a barrel, and you can have the exact same distillate … split it amongst barrels evenly, barrels that are from the exact same place, and five years from now, when you go to taste them, they’re all gonna be a little different.”

All that variation makes for an exciting moment for whiskey. Hutch, American Oak, and Acme Bar & Company all offer whiskey flights for around $10 to drinkers who want to learn and compare. St. George Spirits also offers a tour for $15, followed by a tasting of select liquors the company distills in-house, including the Single Malt Whiskey and the flagship Hangar One vodka.

Industry insiders believe that the whiskey trend is here to stay. Phillip Ricafort, the bar manager at American Oak, said that the quality and quantity of American whiskey is the answer. “I think the growth of the new cocktail movement has gone hand-in-hand with the appreciation of ingredients, and whiskey has just found its moment, and it seems to be more pervasive than others, mainly because, if you look on our shelves, we have over two hundred whiskeys. And the stuff that we’re choosing is not garbage; it’s all quality.”