The manic second installment of Tom Stoppard's ambitious Coast of Utopia series by Shotgun Players appeals to both heart and mind. 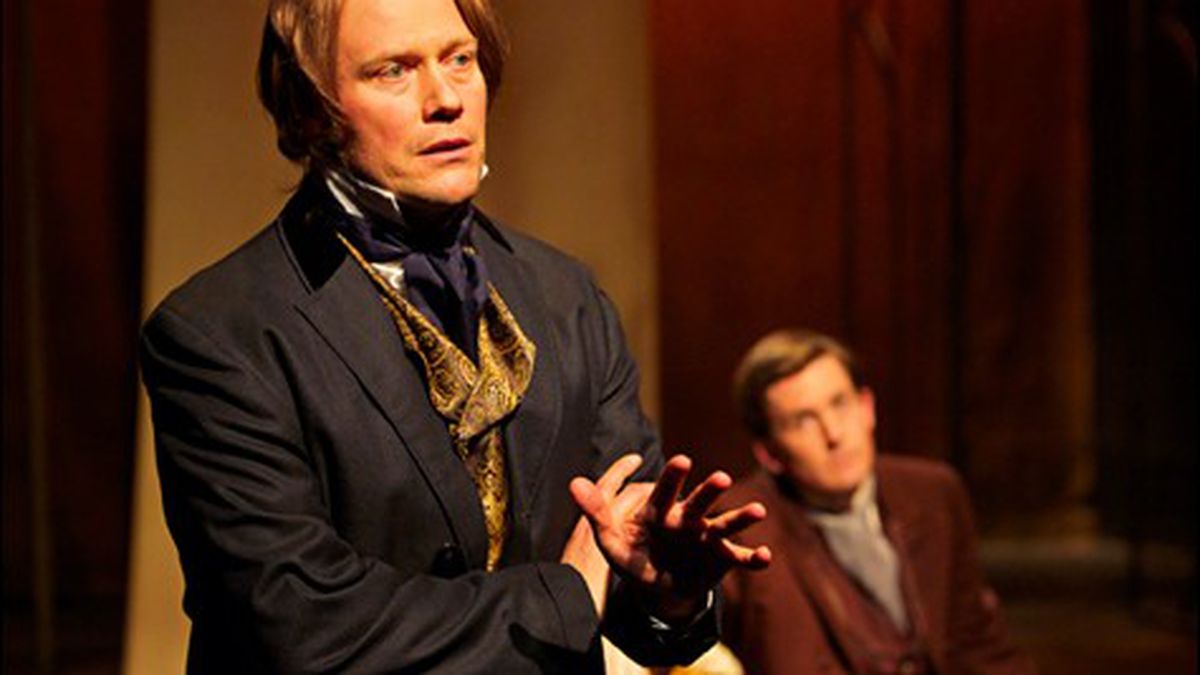 Coast of Utopia, Tom Stoppard’s 2002 trilogy of plays, was destined to be either the playwright’s crowning masterpiece or late-career folly. The general consensus seems to be that it is both. Totaling more than seven hours and involving several dozen characters, it’s also a fairly herculean undertaking for a small company like Shotgun Players.

The company decided to stretch the trilogy over three years, performing part one, Voyage, last year, part two, Shipwreck, presently, and part three, Salvage, in 2014 (assuming all goes according to plan). It’s a fairly awkward arrangement, given the difficulty of getting a cast of more than thirty to commit to something so far down the road. Then there’s the fact that some viewers are bound to enter this very complex narrative midway through and won’t have the stamina for back-to-back viewings, which the company has encouraged by offering a few matinee re-stagings of Voyage. So they better believe that Shipwreck can stand up on its own.

It can and it does. Having not seen Voyage, I was admittedly lost for a good portion of Shipwreck. But that didn’t stop me from falling head over heels for the play just the same.

Voyage, which begins in 1830s Russia, introduced the character of Michael Bakunin as an idealistic university student, who makes friends with the set of young intellectuals (including poet Nicholas Ogarev, “father of modern socialism” Alexander Herzen, and famed author Ivan Turgenev). Shipwreck picks up in 1848, the year that a wave of revolutions shook up Europe — notably France. The friends, now in their thirties, have made it West for the excitement.

At this juncture, Bakunin (Joseph Salazar) is busy with the revolutionary freelancing that will eventually earn him the title “Father of Anarchism,” and the play shifts focus to Herzen (Patrick Kelly Jones), who has married a woman named Natalie (Caitlyn Louchard) and has a deaf son named Kolya (Sebastian Mora). The gang is busy brushing elbows with the likes of Karl Marx and Richard Wagner and developing their great political theories and literary works, while also negotiating their transitions into adulthood and a new class of Russian intelligentsia.

If that sounds like a recipe for a lot of highbrow hot air, it often is. At times the dialogue becomes a closed circuit of garrulous “-ism” warfare and intellectual inside jokes, so the payoff does hinge to some degree on one’s familiarity with the history of European thought and the dialectical “zigzags,” as Stoppard puts it, of the continent’s historical development. Fortunately, as anyone familiar with Stoppard’s work (Rosencrantz and Guildenstern Are Dead, Travesties) knows, the playwright’s brilliance lies precisely in his ability to wed such weighty subject matter to a playful, generously humorous brand of madcap dialogue and witty wordplay that even someone who flunked out of philosophy class can enjoy.

Shipwreck is also supposed to be the most love-struck and lovelorn chapter in the trilogy, dwelling as much on romantic politics as national ones. As with most close friend groups, this one is delightfully incestuous, with betrayals, reconciliations, and love triangles ­­— in particular an affair between Natalie and the rebel German poet Georg Herwegh (Daniel Petzold). Missing Voyage makes for some inevitable confusion in this romantic domain, where complex personal histories pick up where they left off without stopping for a moment’s recapitulation. For example, the character of Maria Ogarev (Christy Crowley), Nicholas’ seductive and unfaithful wife, takes the play from zero to soap opera in seconds flat with her one scantily (un)clad appearance, in which she cattily attacks Natalie. The suddenness of Natalie’s subsequent liaison with Georg is an equally disorienting jolt, all the more so considering its bizarre mise-en-scène: an enactment of Édouard Manet’s “Luncheon on the Grass.” But it is just this kind of zany maneuver that makes Shipwreck such a persistent joy in spite of the occasional moment of bewilderment.

Ultimately, the success of Stoppard’s wildly ambitious work depends on the company that produces it, with the foremost challenge being to draw a unique and beguiling personality out of each character while also setting a group dynamic in motion. Shotgun Players’ production, directed by Artistic Director Patrick Dooley, is positively world class in this regard. The cast is uniformly strong, making for distinctive characters that convene, disperse, and reconvene in innumerable formations on an often very crowded stage, expounding their lofty arguments and assuming their absurd art-historical tableaux, forming an inter-human lattice that is absolutely greater than the sum of its parts.

Some viewers may experience exhaustion from the play’s breathless pacing and the playwright’s pronounced voice. I, for one, emerged hopelessly invested in this group of fictional friends and the players that brought them to life. So, I bear up for what is bound to be one of the most agonizingly long intervals between serial installments ever, counting down the days until part three.