Find killer sandwiches and a low-key brunch at 10th & Wood. 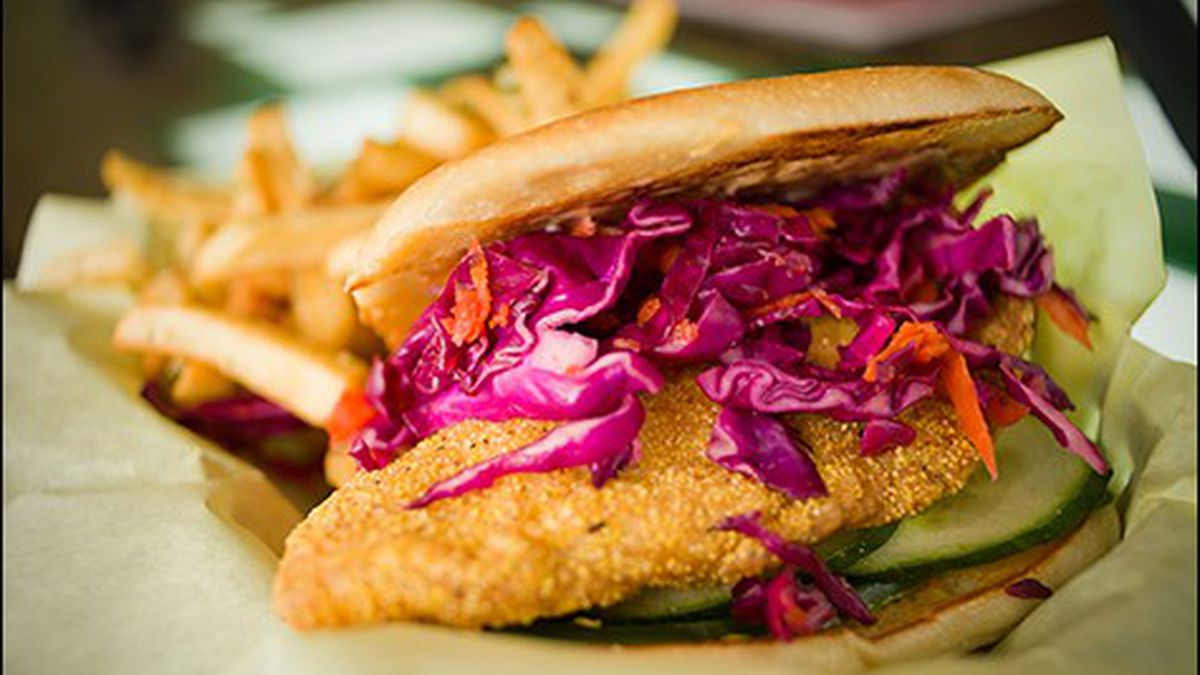 Before Vladimir Levitansky settled down in West Oakland last year, he’d spent fifteen years traveling the world as a circus performer — an honest-to-goodness clown. What he longed for, he said, was something he would always hear his friends talking about — a place where you could get your morning cup of coffee and see the same people every day.

So, Levitansky and his wife Anastasia opened 10th & Wood, a tiny breakfast-and-lunch spot located in a former fish-fry joint that he said he discovered after taking a wrong turn. And it’s true that the restaurant has a hidden-away vibe. It sits amid a unique cross-section of Oakland scenery: drab industrial buildings, the old 16th Street Station, a high-end townhouse complex, and a quiet residential neighborhood dotted with colorful Victorians.

In this setting, there’s no question that 10th & Wood sticks out: It’s an arty-looking restaurant, with a bright lime-green exterior and a design aesthetic — built around a deconstructed tree image — that would probably look more at home in Uptown or Temescal.

The food, too, stands out, in a stretch of West Oakland where there are few restaurant options. The centerpiece of the lunch menu is something Levitansky calls the “po-mi,” a cross between a New Orleans-style po’boy and a Vietnamese banh mi. The concept — while not entirely original — is executed with a thoughtful simplicity. The most popular version features a hefty fried chicken breast, vinegary cabbage slaw, and a dab of herb-spiked mayonnaise. A 24-hour brining process yielded flavor-packed meat, but what made the sandwich exceptional was the details: the toasted telera roll (shipped in from Los Angeles’ La Brea Bakery), which was only slightly thicker than a flatbread, for just the right bread-to-filling ratio, and the thin slices of cucumber and jalapeño, which added a cool, refreshing crunch.

The fried-fish po-mi was even better. It had all of the same components as the fried-chicken version, but instead of chicken there were very thin, perfectly fried cornmeal-crusted tilapia fillets: pure, unadulterated crunch.

Not into banh mi? While the “power chicken” sandwich had a slightly dry grilled chicken breast as its centerpiece, it was redeemed by an array of tasty toppings and condiments: caramelized onions, melted Swiss cheese, pesto, and slices of tart Granny Smith apple. The combination reminded me of a baked apple brie, with the chicken and the pesto providing an additional savory punch.

All of the sandwiches come with fries — sweet potato, seasoned, or garlic (for $1 more) — or a side salad. The lunch menu also features a small selection of meal-size salads (temporarily unavailable during my visits) and a half-pound burger with all the standard fixings.

10th & Wood serves breakfast every morning, with a short, standard menu whose worthiest entry is a very solid biscuit breakfast sandwich. Anyone who’s ever indulged in a sausage, egg, and cheese biscuit from the Fast-Food Behemoth That Needs No Free Advertising From Me will recognize the sandwich, except that it’s bigger and, you know, made with real eggs and house-made pork sausage. (You can also get it with bacon or chicken-apple sausage.) What was most notable was the buttermilk biscuit, which was pleasantly chewy and had a caramelized crust.

If you want something more decadent, you can get one of those biscuits smothered in rich, creamy chicken-sausage gravy — delicious, though I wished there had been more of it — and, during weekend brunch service, a fried chicken breast to top it all off. Or, if you prefer sweet brunch dishes, the “Elvis French Toast” is a thing of beauty: Nutella and chopped banana spread between thick slices of Texas toast, the whole thing dipped in tempura batter and flash-fried. Given the heaviness of the ingredients, the French toast was surprisingly grease-free and airy in texture — but the dish was still insanely rich; I wouldn’t want to eat an entire portion myself.

Most of the breakfast entrées are rounded out with competent (if unexceptional) versions of standard short-order sides such as scrambled eggs and potatoes. There’s also organic coffee (from Oakland-based Mr. Espresso), which was fine as long as you don’t expect some delicate, barista-crafted espresso drink: My cappuccino was bitter and overly foamy.

Note, too, that seating only consists of two communal tables, and a couple of plastic tables arranged, somewhat haphazardly, on the sidewalk. For now, it’s not really a place for a long, leisurely sit-down meal, though Levitansky said that by this summer he hopes to open up the restaurant’s back patio, acquire a beer and wine license, and start dinner service.

Opening a new, somewhat precious-looking business in a less-affluent part of Oakland can be a tricky affair, and Levitanksy said it was important to him not to have “gentrified prices” — to not price out the neighborhood’s historic residents. A full meal at 10th & Wood costs only $9 or $10 — only a bit higher than what you’d pay at a fast-food chain.

And the restaurant attracts a diverse crowd, even for Oakland: construction workers, college students, hipsters, stoners, tech-industry commuters, and older folks who live nearby. Although the restaurant mostly functions as a takeout joint, it has a friendly neighborhood-y feel you don’t always find at places where people from many different walks of life occupy the same space. “All these people get along. All these people sit at these long tables and talk to each other,” Levitansky said.

It almost feels too earnest to write it, but at one point during my meal, while I was scarfing down a fish po-mi, an African-American gentleman waiting in line was waxing eloquent about the sandwich to his lady friend. “Look, he’s having one right now,” he said, pointing me out.

“It’s hella good,” he said, by way of correction. And it was.