.A Protest on Two Wheels

A bike ride from Oakland to Sacramento aims to halt cuts to education funding. 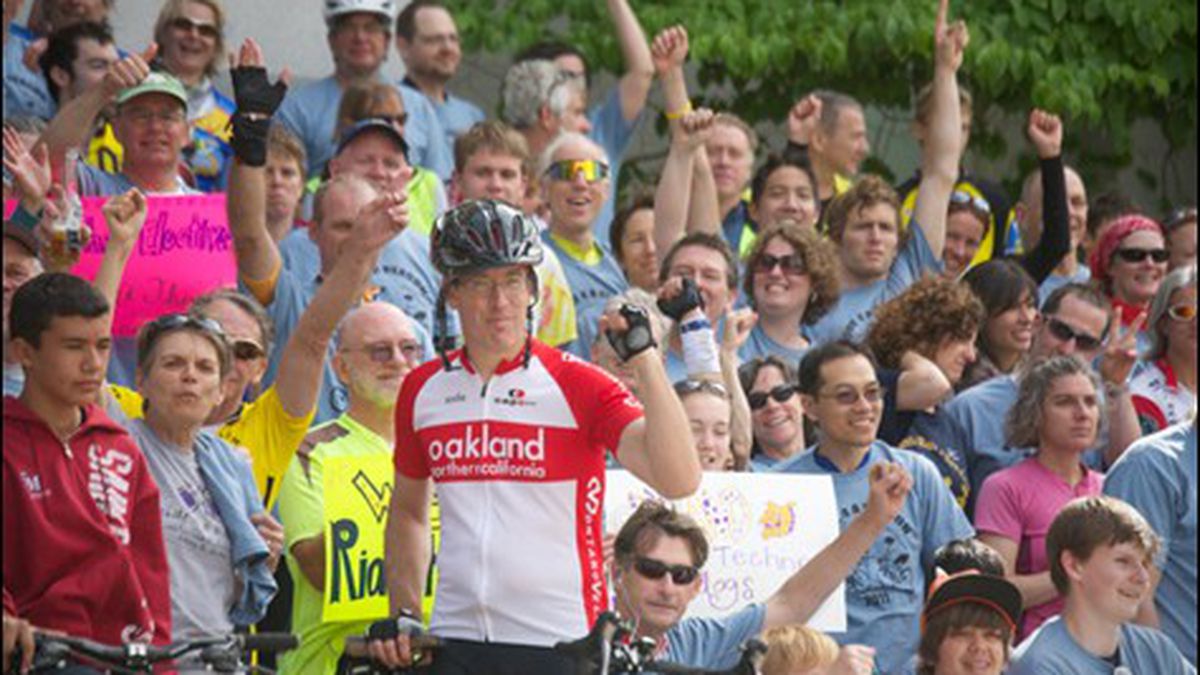 In the spring of 2009, four parents from North Oakland decided to raise money for their PTA with a neat stunt: They rode their bikes 100 miles to Sacramento. “It was a physical challenge,” ride organizer Michael Napolitano said. “But, symbolically, I thought it was important to work hard.”

The idea was to connect — literally — their kids’ school with the state capital. Brutal cuts to state funding meant the budget at Claremont Middle School was smaller every year. Napolitano and his fellow riders were fed up.

They felt elected officials in Sacramento were not holding up their end of the public school bargain. So they got on their bikes and rode east to demand more money for their school and for all of California’s public schools. “What happens in Oakland is a preview for a whole erosion of schools in general,” Napolitano said.

In the three years since, the state has continued to slash education funding, and the four-parent delegation has morphed into a multi-school force of more than one hundred parents, teachers, students, and community members pedaling to the capital to demand better funding for K-12 schools.

Why bikes? As parent Paul Vetter put it, “it prevents us from carrying pitchforks.”

The two-wheeled protest is called Ride for a Reason, and this year’s ride will happen on Saturday, May 12. Riders can choose a 100-mile, 65-mile, or 45-mile route. Volunteers provide breakfast, lunch, and all the fluids riders need to make it to Sacramento. When everyone arrives at the Capitol Building in the early afternoon, they hold a rally for education funding.

“Biking to the capitol is certainly a visual display of taking action,” Senate President Pro Tem Darrell Steinberg wrote in an email. He greeted the riders on the Capitol’s steps last year and applauded them on speaking out proactively. In addition to rallies, letters, and phone calls, Steinberg wrote that taxpayers should express their concerns at the ballot box this November with a “yes” vote for Governor Jerry Brown’s tax initiative. “More revenue for the state means more revenue for the classroom,” Steinberg wrote.

That revenue is needed, said pint-size rider Nathan Lee, 10. “It’s important because students need their education,” Nathan, who made the ride on a tandem bike with his dad last year, said. “They need it so they can have a good life. Find a job and stuff like that.”

At Claremont Middle School where Nathan will be a student next year and where this all got started, the PTA contributes funds for everything from classroom supplies to computer classes in 3D design. The PTA also supports the school band, open house night, and a conflict-mediation program, among other things.

“They’re often able to come up with resources when we don’t have it in our budget,” Assistant Principal Itoco Garcia said. While he’s grateful to the parents for raising funds, Garcia is also glad they are unwilling to accept tiny school budgets as the status quo.

“We’re the seventh- or eighth-highest grossing economy in the world,” he said about California. “We arguably should be first in per-student spending.”

Instead, California is 43rd, according to the 2011 rankings by Education Week. That rank has fallen steadily since 1978 when Proposition 13 became law and instituted the rule that all new taxes must be approved by two-thirds of voters.

To fill that gap at Claremont, Garcia said the Claremont PTA brings in nearly $200,000 a year for the school. To that end, Ride for a Reason isn’t just a protest; it’s also become the school’s second biggest fundraiser. Last year, the ride raised $45,000 between Claremont and Oakland Technical High School. So far this year, they’ve raised about $20,000. The goal is $60,000.

Organizer Napolitano is aware that even if the group hits their goal, the education-funding problem won’t be fixed for most students unless the state steps in. “There’s a lot of places where, through good fortune and grace, the parents and community are able to step up and replace things that have been lost,” he said. “But there are so many places where parents are already maxed out.”

Lucy Flattery-Vickness, 13, rode 45 miles on her own steam last year and will be attacking the course again on May 12. Right now, she said, parents are covering a lot of her school’s needs, but “it used to come from the taxes. Then they started cutting it out and using the money for other things.”

That needs to change, she said. “It’s really important that kids are getting the opportunities they deserve,” Lucy said. “If we don’t have the money, that’s hurting the chain of possibility.”&#8;