Call it standard decor for the 21st-century coffeehouse: a wall of shiny silver Macbooks and, behind them, a legion of new-generation “officeless” workers, clicking away. Spend enough time talking to local cafe owners and you’ll likely hear a few rants about the most egregious of these laptop drones, who squat all day, leeching Wi-Fi, often without purchasing more than a single cup of coffee.

But according to Dominick Scala, an Oakland-based writer and former bartender, there’s no reason the two basic cafe functions — a place to do work and a place to socialize and enjoy good food and drink — need to be mutually exclusive. And so Scala plans to open what he calls a “new school cafe dedicated to those who work from home” — a place that will embrace Wi-Fi addicts and other customers who, quite simply, need to get stuff done. The cafe, which Scala has dubbed Cafe Underwood, will be located at 308 41st Street (at Broadway) in North Oakland, in the same building that will house the new Trueburger outpost. 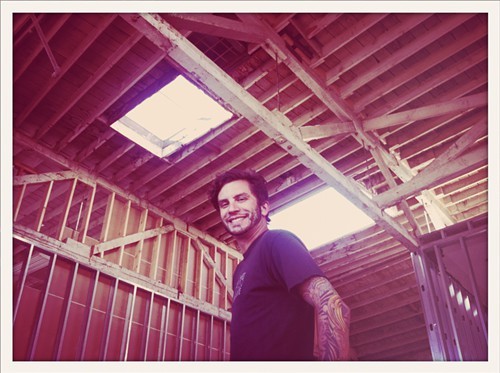 Scala said the seed of the idea came when he was spending a lot of time working at cafes and found the experience frustrating. If you’ve ever worked at a coffee shop, you know the little dance you do: The search for a table and a free outlet. The internal calculation about how long you can wait before you’re obligated to get up and make another purchase. The need to move to a different location altogether for a “real” meal.

Meanwhile, Scala’s wife worked in the tech industry, where more and more startups were saving thousands of dollars every month by choosing not to have an office at all. Instead, they’d rent a conference room when they needed to have an in-person meeting or, more likely, just meet up at a local coffee shop.

What Scala envisioned, then, was a place that would offer great food and coffee and a combination of free tables and private office spaces that would be available for rent: “We know that [San Francisco-based “coworking space”] WeWork and rentable office spaces work, and we know that cafes and coffee shops work. We’re just creating a hybrid of the two.”

So, at Cafe Underwood there will be a wine-and-beer garden in the large outdoor patio area for customers who want to eat and socialize. Inside, there will be plenty of tables that work-from-home types can use for free — or for the cost of at least one cup of coffee — with plenty of outlets and, of course, free Wi-Fi. Need to make a phone call? No problem: There will be several phone booths set up in back so that you can talk without disturbing your neighbors. There will also be a couple of small private offices and, in the upstairs mezzanine, a large conference room, all of which will be available for rent.

Stag’s Lunchette and Bar Dogwood owner Alexeis Filipello, for whom Scala worked at Dogwood, is helping Scala develop the menu, which will slant Italian (think sausage and peppers; eggplant parmigiana; hearty, non-lettuce-based salads; and a small selection of sandwiches).

The cafe’s name refers to the Underwood brand of vintage typewriters, which Scala collects, and the decor will be a “tip of the hat” to New Orleans — so expect a more personal, less “corporate-y” vibe than your typical office space. Scala said he hopes that writers and other artistic types will make up a sizeable chunk of his customer base. Ideally, he said, a group of Burning Man organizers would feel as comfortable hosting a meeting at Underwood as the entrepreneurs behind a new tech startup would.

Within the next week, Scala plans to launch an Indiegogo campaign to raise money for the build-out of Cafe Underwood, which is tentatively slated to open in February.

Update: Here is the Indiegogo link.