.A New Life for Larry the Bus

John Benson wants to turn his AC Transit bus into a mobile comedy venue. Hopefully, he'll get the chance. 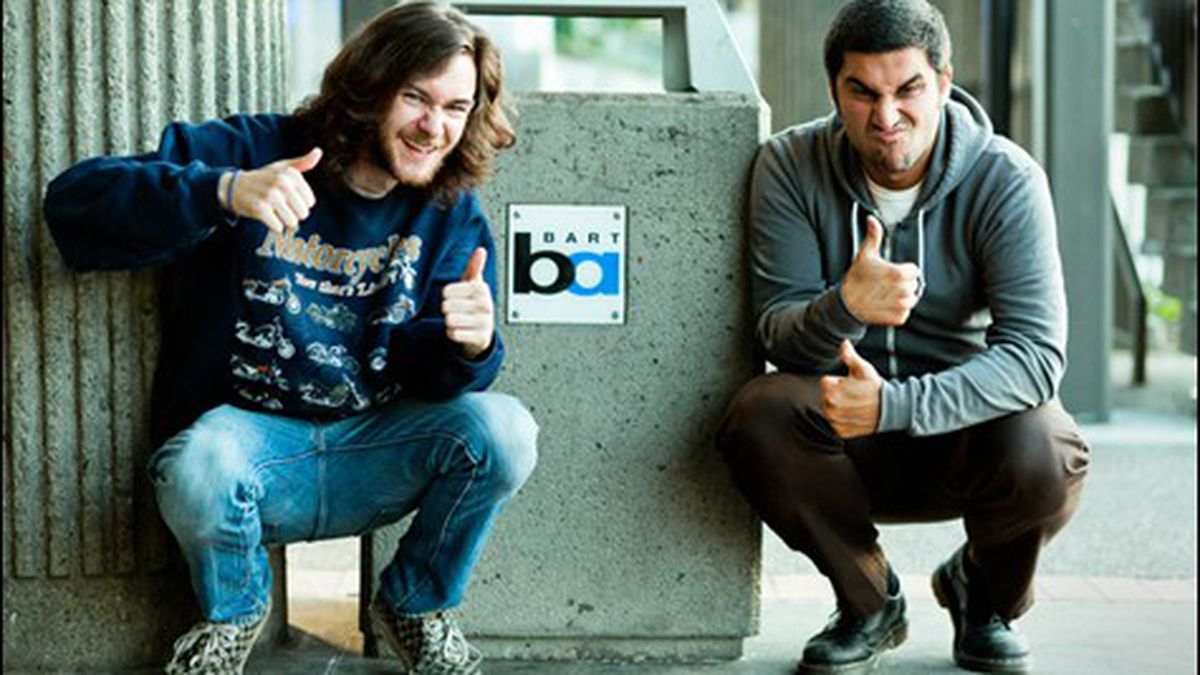 “Larry” is the affectionate nickname that John Benson bestowed on the AC Transit bus he bought for $2,000 in 2009. It was the second such vehicle he’d purchased, gutted, and transformed into a mobile show venue — the first broke down in Albion, Michigan, forcing Benson to buy a house for $4,000 just to have a place to park it. (He put the house on his credit card, and made it a free studio for artists and musicians.) Larry died right as Benson was driving a group of disabled activists home from a protest in Sacramento last year. It took Benson and his punk scene friends a while to pony up enough cash for the $4,300 repair bill but, eventually, they rescued the beloved bus from a tow yard in Fairfield and got it up and running again.

At some point, Benson started thinking of new uses for Larry. The bus was always meant for some kind of larger social purpose. That’s what Benson intended when he bought the bus — he’s a congenital do-gooder.

Then George Chen, a local promoter (and sometime Express contributor), pitched Benson the idea of turning it into a mobile comedy club. Chen had recently begun hosting variety shows at unlikely East Bay locales. (His last one happened at Saturn Cafe, a vegetarian diner in Berkeley.) The concept addressed the same type of problem that had led Benson to buy an AC Transit bus in the first place: a dearth. In this case “dearth” meant that local yucksters didn’t have enough places to tell their jokes.

Chen wanted to put on shows that required a little less setup and cleanup than live music. Comedy was sort of a no-brainer. The increasing amount of crossover between the punk and comedy scenes guaranteed that bus comedy would have an audience.

The comedy bus had its first iteration last Friday evening, with a lineup of six comedians and a willing audience of about twenty people. Benson picked everyone up at Ashby BART around 8 p.m., allowed four folks to stow their bikes in one corner of the bus, and installed a mic stand over a tiny lump of orange carpet, for the stage. Folks arrived with big backpacks and paper-bagged wine bottles in tow. For the most part, it was a younger, grungier, punkier crowd than you’d find at a regular comedy club, owing partly to the featured performers (half of whom were culled from an open mic series at Mama Buzz Cafe) and partly to Chen’s advertising base (he’d mostly promoted the event on Facebook). Also, it’s worth noting that only a certain type of spectator could withstand three hours on a refurbished AC Transit bus, listening to jokes about masturbation and weed.

Bus comedy is risky for the same reason that it’s appealing: The audience can’t leave. That means you don’t have the problem of drunks coming in off the street, or people trying to hold conversations over the comics. Everyone who boarded Larry last Friday had to be fully committed to the production — and to Benson’s itinerary, which included stops at 1-2-3-4 Go! Records, Occupy Oakland, and a West Oakland warehouse party. They couldn’t start heckling when Roman Leo ran out of material, and reverted to cougar bits (most of which bombed). They couldn’t clown Alee Karim for writing his jokes down on a sheet of notebook paper, and referring back to it when he got nervous. They couldn’t complain as the night wore on, and more people crowded the bus, and someone brought in a dog, and a warm, beery, fermented, nicotine stench pervaded the air.

Alex White, who went up second that night and also helped book the lineup (since he hosted the Mama Buzz comedy night until its demise last Monday), said he loved the idea of a captive audience — literally and figuratively speaking. “There wasn’t really a stage, and we weren’t really lit,” he said later. “I was, like, ‘Oh, this is great.'”

While Chen says the idea was a collaborative effort between him and Benson, Benson gives Chen most of the credit for conceiving the idea, and says he supports it wholeheartedly. After all, comedy seems like a good way to expand Larry’s portfolio. Lately, he said, most of the bus shows have featured obscure experimental noise bands that attract a very specific audience. Most of the people who came for comedy night had never seen the bus before. That alone made it a rousing success, Benson said, indicating that he would most certainly do bus comedy again.

Assuming he gets the chance, at least. Just two days after comedy night, Larry was in trouble again. Benson said he woke up on Monday morning to find the bus covered in graffiti. He usually parks it on Martin Luther King Jr. Boulevard, or on a side street of his North Oakland neighborhood, where it’s occasionally vulnerable to vandalism. This time, someone had gotten it good. The windshields, the sides, everything — it was a disaster, he said.

Benson had no choice but to leave it that way while he went off to work (by day he manages a wheelchair repair business), but he returned that afternoon, armed with a bottle of cleaning solution. That’s when he saw a second disaster, in the form of “an obnoxiously beautiful blond woman, with a beautiful brand-new bicycle, and a brand new bike helmet, and brand new yoga pants, and a large, expensive, brand-new, broad-lens camera” that she was using to photograph Larry.

Benson approached the woman. “You see what they did to my bus?” he said, trying to sound nonchalant. He said the woman turned on him. “Oh, that’s your bus?” she asked. “We’re gonna have to ask you to leave. We don’t want it parked in our neighborhood.” She told Benson that the neighbors had scheduled a meeting to address the bus, along with several other forms of “blight.” Benson, who also owns a house in the neighborhood, said he hadn’t been privy to any of the discussion.

So now, Benson is back in full “defend the bus” mode, right at the moment that he’s found a new do-gooder purpose for the bus. The timing is exceptionally frustrating. And in Benson’s eyes, it’s certainly not funny.

Previous ArticleMarching, Dancing, and Lots of Tear Gas: What Went Down Last Night at the Occupy Oakland Protest