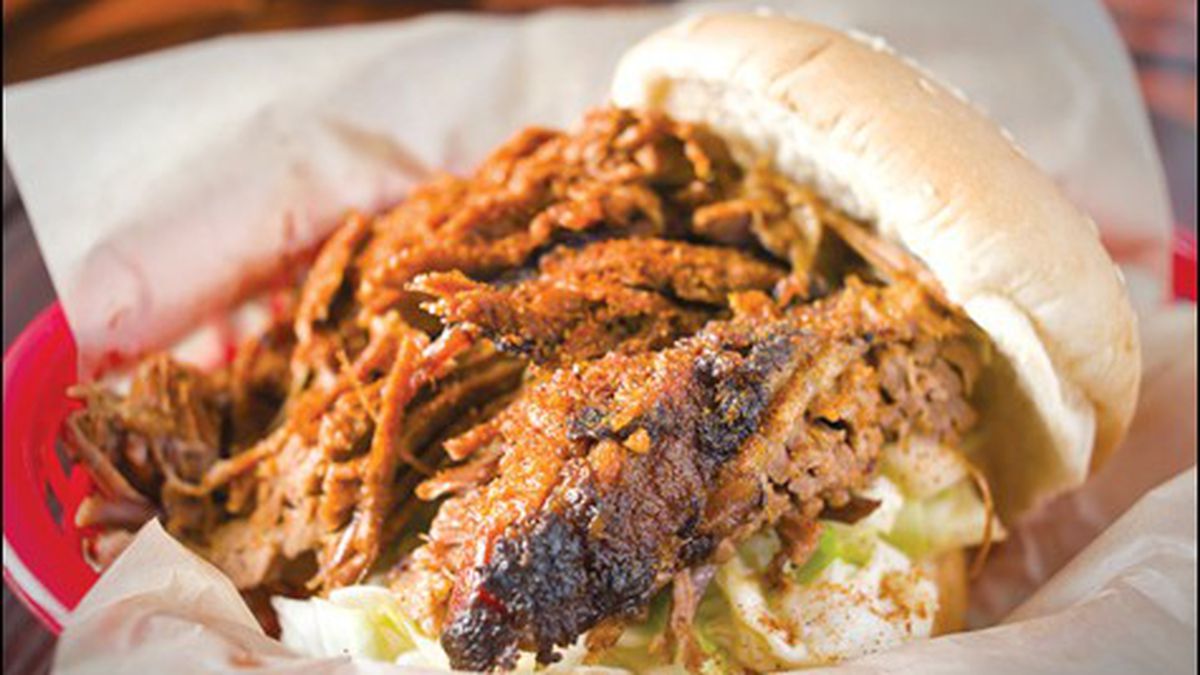 In The Warmth of Other Suns — a history of the Great Migration, the decades-long exodus from Southern states to the north and west — Isabel Wilkerson reveals that black settlers in Oakland have roots in southern Louisiana. In other words, not barbecue country.

That may explain why barbecue here lacks strong regional identity. Also why it’s rarely as good as you want it to be, relying more on sauce than smoke. The Bay Area’s African-American barbecue culture dials up a menu of pan-Southern styles: slices of brisket glazed with tangy sauce, sundae-size scoops of pale macaroni salad, cornbread muffins. It skews more Kansas City than anywhere, driven by a dark, sweet, ketchup-bodied sauce that can mask a multitude of sins. Or not.

Barbecue’s soul-food style rules at Everett and Jones, founded in East Oakland by Alabama-born Dorothy Everett and her daughters back in 1973. It’s also king at The Brick Pig’s House on Shattuck Avenue in North Oakland, where the big blue menu board lays it down: “Black American Style BBQ Take Out.” Then there’s the sauce, which has a molassesy ripeness that reads like a sidebar in a John T. Edge primer on Southern foodways.

And what of Flint’s? An image of the shuttered storefront on Shattuck could illustrate some elegiac essay on the black exodus from Oakland, but wait: The Bay Area is experiencing a barbecue revival at the moment, a flowering of hot links and rib tips not seen since the rise of Dorothy Everett’s empire. The only difference is that this time it’s white guys perfecting their rubs and sprinkling hickory chips into high-end commercial smoker boxes.

You don’t have to look farther than North Berkeley, where T-Rex has carried the flag for high-end barbecue in the Bay Area since late 2005. (I’m disqualifying BarBersQ for its Napa location, not the ridiculous succulence of its Memphis-style pulled pork.) What’s happening now feels different, though. In the past year, Bay Area barbecue has completed its breakout from a strictly urban format to arrive in the land of American-heritage charm food with the red-state glow of native pride, a route previously trekked by bourbon, pork rinds, rye whiskey, and bacon, which — taken together — sound like a pretty good night out.

San Francisco has seen a new generation of rib trucks and pop-ups rise as fast as tensions on an episode of Food Network’s Best in Smoke. Standouts include Daniel Frengs’ Slow Hand BBQ, which burns up both ends of an east-west axis of San Francisco bars and Contra Costa farmers’ markets, and Sneaky’s, which dishes up barbecue in the early evening at SF gay bar Rebel, then clears out before go-go boys start working the stripper poles. From the outer limits of East Oakland to the inner reaches of San Francisco’s gayborhood, barbecue has traveled quite a road.

In Berkeley, Josh Kemper didn’t have to travel nearly so far. On June 1, Kemper opened Smoky J’s Q House in the old Taste of Africa space, just blocks from The Brick Pig’s House and boarded-up Flint’s.

Smokey J’s is in the tradition of its neighbors, half a dozen animal proteins subjected to a mix of smoldering mesquite and apple-wood chunks, over a rub that in some cases takes precedence over smoke. Meats come configured as either a Two or Three Way, separated by coarse-cut cabbage slaw, or as a sandwich, heaped between slices of Wonder-esque white or on a floppy sesame bun. You won’t find kurobuta pork belly or Marin Sun Farms brisket, but you won’t strain to pay the check either.

Naturally, the smoke from Kemper’s double-walled Cookshack unit comes through clearest in the paler meats — thick-sliced rib tips on a sandwich, say, moist flesh shot through with fractured cartilage knuckles. The prominence of mesquite in the smoke makes the pork taste meatier somehow, and sweeter. That’s one reason I wish Kemper’s dry rub were less sugary — the smoke provides enough, all on its own.

Still, sugar must help to ensure a nice little crust on Kemper’s baby back ribs. The meat is tender enough to peel from the bones, after a bit of nibbling, and the flesh has integrity: chew, a moisture index you could almost tag as juicy, and a steady rumble of smoke. The crust can be epic on Texas-style brisket. One day it had formed a coffee-colored exoskeleton of chewy fibers around thick, shattered slices kept tender with pockets of jiggly fat, and a densely beefy flavor. On another visit I strained to find bits of crust in meat that had shattered into an unsatisfying mass of fibers.

The roasted garlic potatoes, cooked underneath rotisserie-cooked chickens, were barely cooked and flavorless both times I tried them, and the potato salad tasted like leftovers from the rotisserie bin. If you need a side, get more coleslaw.

Kemper references Texas again in his Frito pie, a made-to-order casserole of corn chips, cheddar, pulled pork, and barbecue sauce, pimped like some seven-layer bean dip with pickled jalapeños and sour cream. It’s trailer-park food made serious via Kemper’s good pork, and house-made sauce with a nice balance of smoke and tang and a low risk of edging you into sugar shock.

Kemper makes his own hot links from beef and pork; they have an oddly wooly texture I sort of liked. His poultry sausage, however, is fantastic, made from chicken thighs and a whole turkey, boned and ground in-house, smoked and seared in a tub-size iron skillet.

And it’s perhaps the only clue to Kemper’s past. The 33-year-old spent years cooking California bistro food at high-end hotels in Thailand and Mumbai, India, before coming home a refugee from international fine dining, somebody who had to travel to the other side of the world to realize he loved the pure products of America, especially barbecue.

Talk about the great migration. “When you live here, you hate it,” Kemper said. “Then when you leave it you think this is an amazing place.”

The Port Should Pay for Police