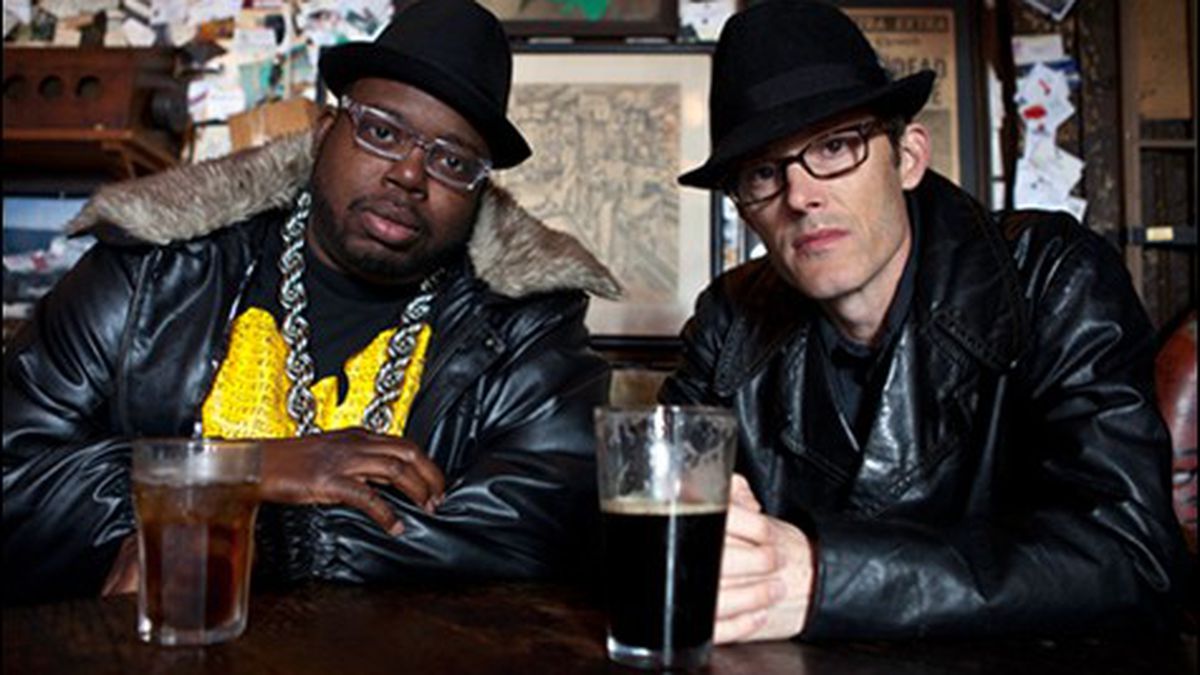 Prozack Turner and Marc Stretch grew up, but they're still full time B-Boys.

Emcees Prozack Turner and Rick “Marc Stretch” Govan don’t really need a mythology to make themselves interesting, but they’ve tried it anyway. In past biographies, they met in space camp. Or the first Gulf War — Turner was a chopper pilot, and Stretch was the gunner. Sometimes they say the war was Vietnam. (In which case, an interviewer would have to accept that both rappers are very young-looking geriatrics.) Other times, they say they met while deep-sea diving. “We were looking for the same buried treasure,” Prozack likes to say.

Thus, the real story of their duo, Foreign Legion, is hard to pin down. And it’s a little more prosaic than what you usually find in the group’s press materials. Prozack and Stretch met at a bar in 1997 and hit it off. Physically, they’re opposites: The fact that Zack is small and white, while Stretch is tall and black, has always made the group look slightly, well, gimmicky. But fans take endless pleasure in noting that they have uncannily similar personalities. Both are fast, clever, aggressive, flinty, and sarcastic, with an acid sense of humor. They’re self-employed rappers who could easily survive in other industries. Until January, Prozack co-owned the Layover bar in downtown Oakland, while Stretch worked at a graphic design company. It’s little surprise that when they first met, Prozack was selling shoes at Nordstrom.

But only recently have the two made their real lives the cornerstone of an artistic project, namely with the movie that accompanies their new album, Night Moves. Originally planned as a TV series, it’s a sitcom about two struggling rappers who have just inked their first major-label deal, and are trying, against all odds, not to screw it up. Prozack and Stretch play exaggerated versions of themselves. In the opening scene, Zack tries to negotiate with a CEO from Interscope Records, who is bogarting the master copies of Foreign Legion’s new album. In this case, the master copies serve as collateral, since Stretch broke some equipment at Interscope. Thus, the emcees have to cook up a crazy scheme to pay off the debt and get their masters back. It involves a hooker named Donna, who winds up being the group’s unlikely co-conspirator.

Okay, so that doesn’t exactly qualify as real life. But it does have historical underpinning. Sort of. Prozack did, indeed, sign to a major label in 2005 — DreamWorks, which was distributed by Interscope — but he never saw the official release of his solo debut because the label folded that year. In fact, DreamWorks held Prozack’s master copies hostage, so to speak, in a way that seems almost as diabolically absurd as it does in the Night Moves movie plot. After that, he decided to be DIY for good. Then the other major labels started toppling, and the point became moot.

“At this point, it would be hard to put an album into someone else’s hands, because I know how to do everything,” Prozack said. And he’s right. Prozack produced seven of the thirteen tracks on Night Moves, mostly for economic reasons, he said. He also wrote and directed the movie. At this point, the two rappers are handling everything themselves, from management to the recording process. And they seem to do better that way.

Foreign Legion is that rare hip-hop group that managed to attain real longevity in the underground, partly because of a rigorously channeled imagination, but mostly because the two emcees are savvy enough to handle their own business operations. That was true from the jump. When they began collaborating in 1997, Stretch had only recently discovered backpacker hip-hop. “I was living in Vallejo,” he explained.

The two actually met through their mutual friend DJ Design (aka Keith Griego), who used to be a bona fide member of the group. Prozack and Stretch were both capable rappers with sharp senses of humor; it seemed like a perfect match. Their principles aligned, but their intonation was different enough to give the sense of two distinct voices. And they suited each other for logistical reasons. “I figured, hey, I could cut my songwriting in half,” Prozack said. “Plus add some color to the group,” Stretch interjected. After a few promising freestyle sessions, the two emcees started splitting their writing duties. They began performing around town in costume, dressed as Star Wars or Flintstones characters. The two released their first album, Kidnapper Van, in 2000, and established themselves as resolute indie flag wavers. The album’s single, “Full Time B-Boy,” is a celebration of self-employment, autonomy, and full creative control. It remains one of their most memorable songs.

Since then, they released a party album called Playtight (the single from that one was called “Happy Drunk”), along with a few side projects — including Prozack’s two solo affairs. Prozack got married and opened a bar. Stretch expatriated to Hayward, but moved back to Oakland after the statute of limitations expired on his parking tickets. In short, they grew up.

It shows in their sartorial choices. Sitting at a table in Heinold’s First and Last Chance bar, the two emcees looked more handsome and world-weary than in previous years. They wore matching fedora hats and chunky sunglasses — Stretch said his were made from the same polymer as Wonder Woman’s airplane. Prozack wore a pea coat and three rings. Stretch sported a Wu-Tang shirt and a big, coiled gold chain that he called “a dookie rope.” (“Old-school terminology,” he explained.) An artist at a nearby table began sketching Prozack in his notepad.

Their new album is grown up, too. “Fast and Loose” is a celebration of carefree lifestyles, but it’s also a reality check — Prozack starts off with a reference to parking tickets; Stretch raps about rolling with the punches. “Angel” is a love ballad in which Prozack yearns for functional marriage and domestic tranquility (something he’s apparently found in real life). “Fresh Air” is a fake interview with Terry Gross.

The beats on Night Moves are elastic and brisk. They have all the sample-driven glitchiness of old Foreign Legion, but more musical depth. “Piano Banger,” for instance, is a busy patchwork of keyboard and organ sounds, anchored by a simple backbeat. Other songs borrow liberally from Seventies funk, blending horn samples, tambourine fills, rubber-band bass lines, a not-so-subtle theft from Smokey Robinson, and the occasional live instrument.

The single “Travel Lite” is about movement. It has the self-aggrandizing, fantasy aspect of traditional hip-hop — in the video, Prozack and Stretch pretend to be airline pilots — but it’s still moored by common-man humor. They have trouble getting off the ground, at first, because Prozack lost his keys.

Your Daily Lick: The Gun and Doll Show

Your Lede of the Week