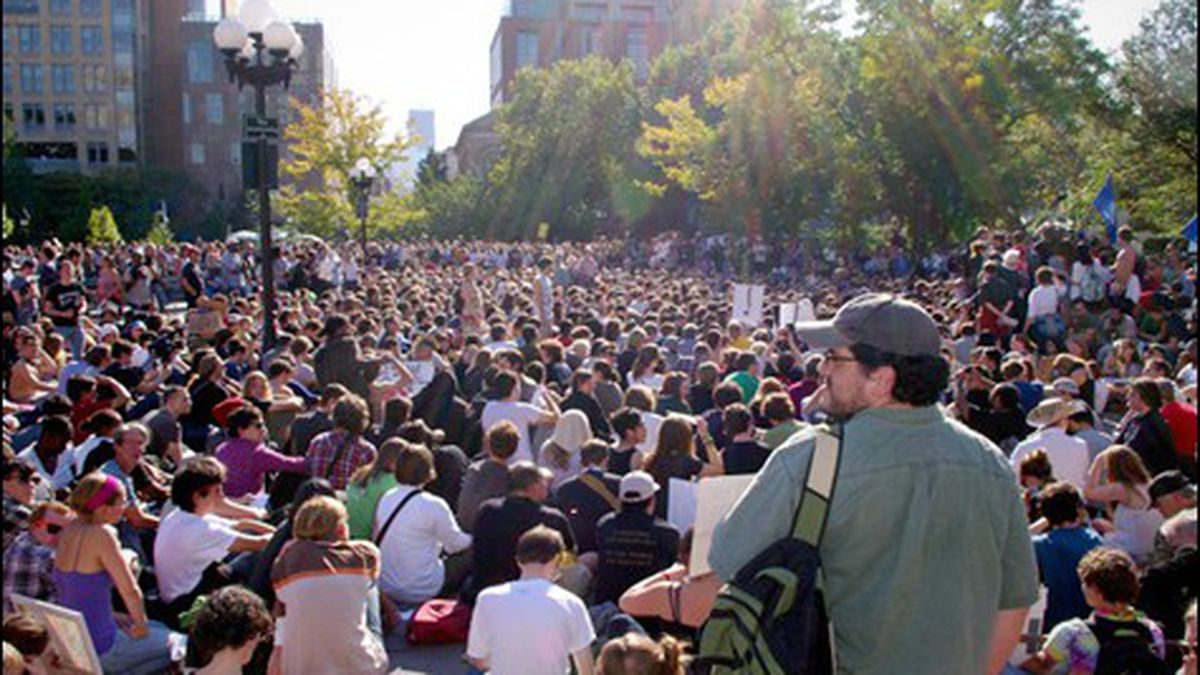 A Moral Stance in a Public Place

Nearly fifty years ago, at the beginning of the radical upsurge of the 1960s, a group of young activists issued the Port Huron Statement, a formative and prophetic writing on their view of the times and their fears and hopes for the future. Now centered in New York but spreading to other parts of the country, including the East Bay, a group of young radicals who are part of the Occupy Wall Street movement have issued the Declaration of the Occupation of New York City. While one cannot see into the future, it is not an overstatement to say that this action is in the category of activity that we have seen in the Arab Spring and in the current struggles of the working people of Greece against the poverty that European bankers are imposing on them. For this reason, we are reprinting their declaration in its entirety.

Commonalities between the Port Huron Statement and the New York declaration are striking. Those who wrote the Port Huron Statement “were looking uncomfortably to the world we inherit.” Certainly the occupiers are feeling the same. Even for those who are optimistic about the human spirit, as am I, the world looks quite bleak for young people today. And the Port Huron Statement took on the myths of the powerful of their time, writing that the process of making humane values “has been devalued and corrupted. The conventional moral terms of the age, the politician moralities — ‘free world,’ ‘people’s democracies’ — reflect realities poorly, if at all, and seem to function more as ruling myths than as descriptive principles.”

Like in the time of Port Huron, the terms democracy, equality, and fairness, which the young believed had moral meaning, bear little resemblance in contemporary America to the understandings described in elementary school. The occupiers write of “corporations, which place profit over people, self-interest over justice, and oppression over equality.”

Like those at Port Huron, the occupiers also face a hostile and condescending mainstream press. From the writers at The New York Times to CNN and Fox News, the storyline has been that these occupiers are scruffy airheads who have no idea what they are talking about. At best, these wise scribes and news readers offer the occupiers a polite pat on the head.

But as we watch the confusion in the financial system in Europe and the United States, the discord in DC, the kowtowing to the financial elite by politicians of all stripes, and the upsurge in meanness that is invading our land, it is the height of hypocrisy to write off these occupiers and their statements as naive. There is sure to be more negative press to come, including sophisticated put-downs from some in the liberal elite.

Finally, there is a sacred sense of solidarity in the occupiers and in the declaration. “As one people, united,” they acknowledge the reality that “the future of the human race requires the cooperation of its members.”

This plain and simple phrase may be their most fundamental challenge to the current system. The ruling mantra of our dog-eat-dog system denigrates and precludes such solidarity and cooperation for the common good. Until there is a change in this mindset, which affects us all to some degree, hope for significant positive change will be hard to find. The occupiers are making a moral challenge to the system and they are making it in a public space, not simply sitting in “soldtarity” behind computer screens, as Stephen Colbert would say.

The occupiers are issuing a challenge to the rest of us that gives their activity the potential to be a historic event. Those who feel the sense of injustice and inequality that dominates our time deserve our support.

Declaration of the Occupation of New York City

As we gather together in solidarity to express a feeling of mass injustice, we must not lose sight of what brought us together. We write so that all people who feel wronged by the corporate forces of the world can know that we are your allies.

As one people, united, we acknowledge the reality: that the future of the human race requires the cooperation of its members; that our system must protect our rights, and upon corruption of that system, it is up to the individuals to protect their own rights, and those of their neighbors; that a democratic government derives its just power from the people, but corporations do not seek consent to extract wealth from the people and the Earth; and that no true democracy is attainable when the process is determined by economic power. We come to you at a time when corporations, which place profit over people, self-interest over justice, and oppression over equality, run our governments. We have peaceably assembled here, as is our right, to let these facts be known.

They have taken our houses through an illegal foreclosure process, despite not having the original mortgage.

They have taken bailouts from taxpayers with impunity, and continue to give executives exorbitant bonuses.

They have perpetuated inequality and discrimination in the workplace based on age, the color of one’s skin, sex, gender identity and sexual orientation.

They have poisoned the food supply through negligence, and undermined the farming system through monopolization.

They have profited off of the torture, confinement, and cruel treatment of countless animals, and actively hide these practices.

They have continuously sought to strip employees of the right to negotiate for better pay and safer working conditions.

They have held students hostage with tens of thousands of dollars of debt on education, which is itself a human right.

They have consistently outsourced labor and used that outsourcing as leverage to cut workers’ healthcare and pay.

They have influenced the courts to achieve the same rights as people, with none of the culpability or responsibility.

They have spent millions of dollars on legal teams that look for ways to get them out of contracts in regards to health insurance.

They have used the military and police force to prevent freedom of the press.

They have deliberately declined to recall faulty products endangering lives in pursuit of profit.

They determine economic policy, despite the catastrophic failures their policies have produced and continue to produce.

They have donated large sums of money to politicians, who are responsible for regulating them.

They continue to block alternate forms of energy to keep us dependent on oil.

They continue to block generic forms of medicine that could save people’s lives or provide relief in order to protect investments that have already turned a substantial profit.

They have purposely covered up oil spills, accidents, faulty bookkeeping, and inactive ingredients in pursuit of profit.

They purposefully keep people misinformed and fearful through their control of the media.

They have accepted private contracts to murder prisoners even when presented with serious doubts about their guilt.

They have perpetuated colonialism at home and abroad. They have participated in the torture and murder of innocent civilians overseas.

They continue to create weapons of mass destruction in order to receive government contracts.

To the people of the world, We, the New York City General Assembly occupying Wall Street in Liberty Square, urge you to assert your power.

Exercise your right to peaceably assemble; occupy public space; create a process to address the problems we face; and generate solutions accessible to everyone.

To all communities that take action and form groups in the spirit of direct democracy, we offer support, documentation, and all of the resources at our disposal.

Join us and make your voices heard!

*These grievances are not all-inclusive.

This document was accepted by the NYC General Assembly on September 29, 2011.

Update: A previous version of this column incorrectly stated that the 1960s were nearly forty years ago. They were in fact nearly fifty years ago.