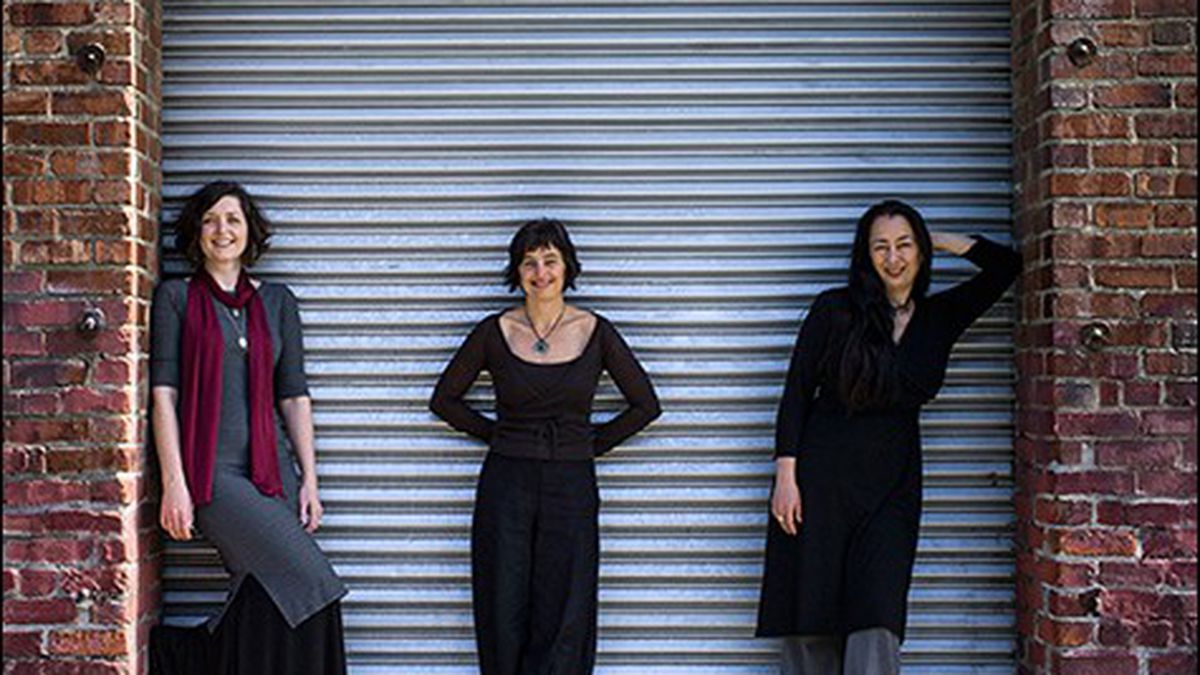 True Life Trio unveils a sample of its most ambitious project yet.

After a fairly quiet year, the trio is in the midst of creating its most ambitious work yet, “Like Never and Like Always: A Memory Project.” A site-specific song cycle designed to unfold as a life lived backward, the piece is slated to premiere in November as part of Laura Inserra’s concert series at Berkeley Rose Labyrinth, which is located in Grace North Church and provided some of the inspiration for the project.

“The initial idea was to create a seamless sonic journey, and then we saw the labyrinth,” Boyle said. “We thought that we could move through it, singing about how life shifts and changes and turns, and how memories are created. We’ve been fleshing out the idea about how perception can shift through the years, the way that we remember things differently as we change.”

Seeking to fund a matching grant from the East Bay Community Foundation, True Life Trio has launched an Indiegogo campaign to raise $5,700, and on Thursday will offer a sneak preview of the work-in-progress at a fundraiser at Studio Grand, which will also feature special guest percussionist Dan Auvil, a top secret Balkan brass band, and a solo set by oud master Gari Hegedus (who’s collaborating with the trio on the project).

Combining Eastern European tunes, poetry, movement, and original music, “Like Never and Like Always” takes the women far outside their comfort zone. While they usually accompany themselves in performance, they recruited the string wizard Hegedus, thinking it would be “interesting to be free of instruments, though Leslie will play the violin a bit,” Graffagna said. “Gari can create these amazing textures with all these string instruments, underscoring our singing. He’ll be writing music to help carry the story along. He’s such a great improviser, with a combination of being rooted in tradition but also interested in experimentation.”

In many ways, the urge to explore notions of identity and memory is inextricably tied to the musical passion that animates True Life Trio. In the East Bay, where the embrace of music and dance from West and Central Africa and their diasporic descendants in Cuba, Brazil, and Jamaica is so common as to be unexceptional, the emotional pull of Eastern European music on people with few old world connections is an enigma in search of an explanation. As Graffagna put it, “Why did we American gals get so obsessed with this music that’s so foreign to us?”

Boyle’s Balkan music epiphany was “like in an out-of-body experience,” she said. The daughter of the respected LA singer-songwriter Karen Tobin and recording engineer Tim Boyle, she started writing songs at age thirteen, and played guitar in various pop and jazz combos through high school. She first heard Balkan music during a brief stint in college in Santa Fe, and ended up moving to Oakland in 2004 specifically to join Kitka. Immersing herself in the vocal traditions of Greece, Turkey, Macedonia, Bulgaria, Albania, and other Eastern European cultures at the Balkan Music and Dance Workshops in Mendocino, she discovered she had a knack for the music’s thick, astringent harmonies and irregular meters.

“At first I was really green and didn’t know anything about the music,” Boyle said. “I would make up harmonies and sing a third above, because that’s what you do in country music. But when I got into the scene, I was really welcomed into the family by Julia and the musicians in Brass Menazeri.”

In 2004, as Boyle joined Kitka, Bonnett was just on her way out after a six-year stint in the group, looking to focus more on playing Cajun and Scandinavian fiddle (she performs with fiddler Joe Finn at Ashkenaz’s annual New Year’s Eve Balkan Bash). A lifelong musical explorer who has delved into the ancient songs of Transylvania and performed new music by Pauline Oliveros, Bonnett rejoined Kitka from 2007 to 2012 until True Life Trio became her primary creative vehicle.

For Graffagna, who grew up outside of Chicago, a passion for Eastern European music was more of an acquired taste than a revelation. Having been deeply involved in music as a teenager, from studying piano to singing in musical theater and church choir, she studied Russian in college without being particularly smitten by the music. After moving out to the Bay Area in 1987, Graffagna on a whim answered an open audition ad placed by Kitka in the Express.

She joined the ensemble, which was already about a decade old, and for quite some time “was on the fence about the group. The music felt so strange and foreign,” said Graffagna, who ended up co-directing the ensemble with Shira Cion and Janet Kutulas from 1997 to 2010. “But after several years it got under my skin. I started going to Balkan music camps put on by the Eastern European Folklife Center, and found it so satisfying to sing this music. Once I started dancing, the rhythms really came to life.”

True Life Trio came together about four years ago, when Graffagna was looking for a creative outlet after leaving Kitka. She also performs with the inventive Near Eastern quintet Janam, but was missing singing harmonies with other women. A few informal get-togethers with Boyle and Bonnett found the women walking around Lake Merritt after singing together — an activity they enjoyed so much they decided to launch a new band. It didn’t take long to settle on a “nice, tidy simple and descriptive name,” Boyle said. “This is like life. You get together with friends, take a walk, and sing.”

The group raised its profile considerably in 2012 with a concise seven-song debut CD, Home, which captures the band’s far-flung repertoire. From the stirring Albanian tale “Malino Mome” to a haunting rendition of the Mexican ballad “La Llorona” to Cajun standard “Old Time Waltz,” True Life Trio creates music steeped in tradition but crafted in its own image.

“It felt very freeing to be starting this group from scratch,” Boyle said. “Leslie has been playing Cajun music for a long time, and she roped us into doing a couple of shows with her. We’re branching out to do more Americana. We’d never heard each other sing in English before! I’m starting to write some more music, and it’s a natural forum to showcase that. And the world of Eastern European music is so vast. On paper it can look like too much of a hodgepodge, but it kind of works. We program shows like a journey, and the continuity is our voices.”