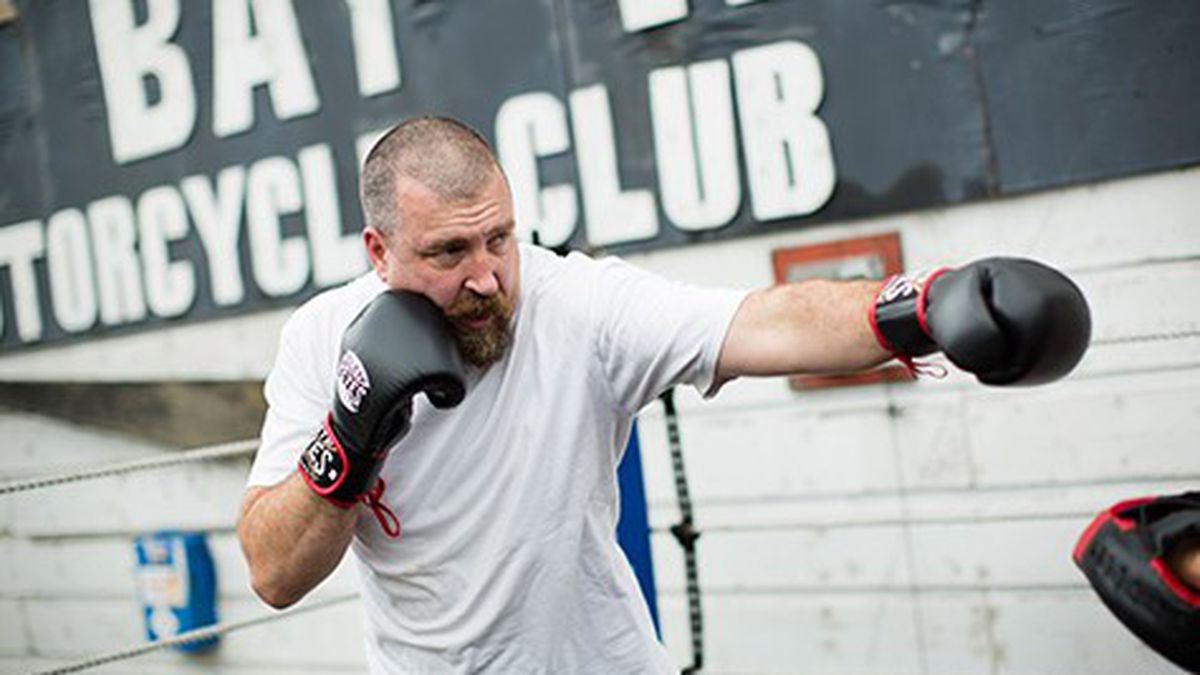 A History of Violence

In Alex Abramovich’s new book, Bullies: A Friendship, Trevor Latham, president of Oakland’s East Bay Rats Motorcycle Club, destroys a bus stop on Telegraph Avenue with a large ax. Glass shatters around the author as Latham “calmly, methodically” bashes the walls, bench, and ceiling. A friend of Latham’s had been mugged there, and her companion had been hit on the head with a bottle, landing her in the hospital with a scalp full of surgical staples. “Whatever he’d hoped to do to the mugger he did to [the bus stop],” writes Abramovich. That passage is one of several in which Latham plays the avenging role in an area where law enforcement is conspicuously absent.

“You remember those old Seventies movies where they flush the baby crocodile down the toilet and ten years later you’ve got a sixty-foot man-eating crocodile rampaging down the streets?” asked Abramovich in a recent phone interview. “Trevor’s like the little boy who was flushed down the toilet, and he came out as this fearsome guy … In a sense, he’s not a bad example of what happens when you take a place and you brutalize it for decades on end, and you take services away, and you take people’s houses away, and you take the schools away. You take everything away and this is sort of what you get.”

As fourth graders growing up in Long Island, New York, Latham and Abramovich traded punches in the classroom, and for many years following, Latham stalked Abramovich’s memory as a terrifying bully. In 2006, Abramovich scored a chance to confront his former adversary face-to-face while writing a story for GQ about the Rats’ notorious fight nights, where people (often untrained) whale on each other in the boxing ring behind their clubhouse on San Pablo Avenue. Instead of facing off with a brute, Abramovich discovered a complicated man with a violent childhood similar to his own. The two formed a friendship, and in 2010, Abramovich returned to Oakland to write a nonfiction account of the Rats and the rubble that birthed them.

But as Abramovich dug into The Town’s history, Bullies morphed into a story about the city as a whole — and ultimately America — with Latham and the Rats as its bloody, beating heart. Tellingly, the book begins not with a bike, but with a tank. On the second page, there’s a 1960 photograph of a WWII Sherman tank heading toward a West Oakland home that it’s about to demolish to make way for new construction. When out-of-town friends would ask, “How did Oakland get to be so fucked up?” Abramovich would pull out a copy of the photo from his wallet. To him, the image is emblematic of “urban renewal, industrial decay, brute force, and bullying.” In other words, the themes he threads throughout the rest of the book.

“I’d like to say that [while working on Bullies] I learned that this country is born in blood, and still neck deep in it … and violence in fact is the connecting thread in American history and certainly in Oakland,” said Abramovich. “But the truth is that I knew that already.”

The infamous Your Black Muslim Bakery trials started a few months after Abramovich arrived, and he spent days in the courtroom listening to Devaughndre Broussard, the man who shot and killed journalist Chauncey Bailey, describe the murder and the unfortunate life that led him to the bakery in the first place. Near the end of the year, Occupy took over the city’s center. He met Scott Olsen, an Iraq War vet whose skull was fractured by a police-fired beanbag round at one of the protests. Abramovich was also at the BART stop immediately after Kayode Ola Foster, a 25-year-old who had briefly joined the tent city, was shot there.

But Abramovich also witnessed the lighter side of violence at Hoodslam, an underground professional wrestling event, where he watched Chupacabra battle Man in a Prawn Suit and Zombie versus Circus Clown. “All of these stories connected for me — the wrestlers, Your Black Muslim Bakery, the Rats,” said Abramovich. “These paramilitary organizations had sprung up to fill this void left by the withdrawal or absence of basic social services.”

According to Abramovich, the conditions that gave rise to post-World War II Oakland parallel the conditions that gave rise to modern motorcycle clubs. Before WWII, motorcycle clubs were sort of like sportsmen’s clubs. People wore sweaters. The mayor of San Francisco belonged to the local motorcycle club. “After the war, all these fucked-up soldiers came back with PTSD,” explains Abramovich. “There was no diagnosis; there was no help for them.” So veterans banded together and found support through a new breed of motorcycle club. As an industrial city full of mechanics and gear heads, Oakland was ripe for this sort of brotherhood.

“If you look at stats for when motorcycle clubs became big in terms of membership and cultural profile, it coincides with WWII, Korea, Vietnam, and the wars in the Gulf,” he said. “Many of the Rats are former soldiers and that’s not a coincidence.”

Amid all the turmoil, Abramovich also fell deeply in love with Oakland. “It struck me as one of the most creative places I’d ever lived,” he said. “Driving through East Oakland, there’s no roller rink, there’s no movie theater, there’s no place to go, so people just have to do for themselves. It’s just this very DIY, super creative place.”

Bullies isn’t an account of Oakland that will sit well with everyone, especially those who may have a problem with an East Coast writer publishing an opinion on the place after living here for just four years. But there is something fascinating about the aggressive angle from which Abramovich tackles the subject, and, at times, it’s exhilarating to see the city from the back of a Rat bike.