.A Growing Fire Hazard in the Berkeley Hills 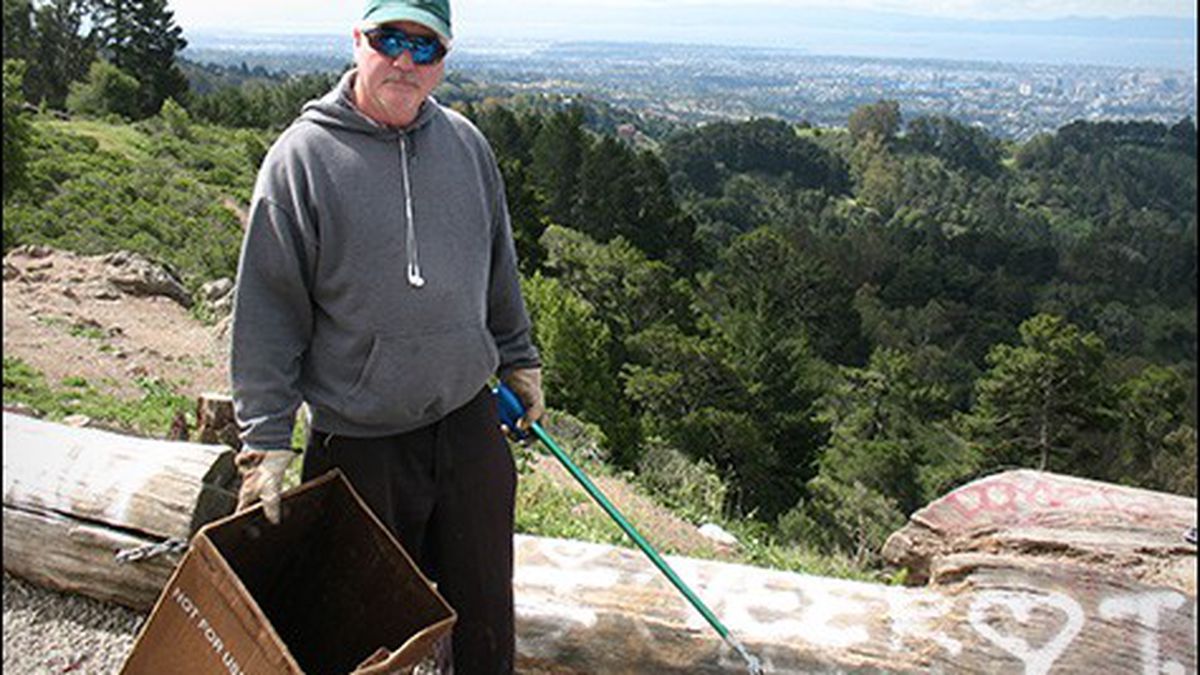 Since last spring, Hank Chapot, a longtime UC Berkeley gardener, has been responsible for cleaning up trash at three scenic turnouts along Grizzly Peak Boulevard in the Berkeley hills. Every Monday and Friday morning, he and a co-worker drive to the popular lookout points on campus property and remove the garbage that has accumulated since their latest cleanup — often a mix of discarded food containers, beer bottles, dumped household junk, and more. The trash, however, is not the most frustrating part of the job. It’s the regular evidence of illegal campfires that he finds particularly troubling.

“People park up here and drink and party — and periodically, they get it into their minds that they want to have a campfire,” said Chapot. “They are burning fires at the turnouts …. I’ve been witnessing this for over a year.”

Chapot said that he discovers signs of fresh campfires in the area a few times a month — most frequently on the two turnouts located near signposts 14 and 15 on Grizzly Peak. Turnouts along this stretch of road between the Tilden Steam Trains and Centennial Drive are popular because they offer sweeping views of San Francisco Bay. Chapot said that most often he finds scorched wood and ash — and in some cases, remnants of multiple campfires near each other at a single turnout. They’re especially common after weekends of nice weather when the turnouts get high traffic. While he hasn’t caught people lighting fires, he said it’s clear this has become a regular occurrence and significant hazard — one that campus officials should take seriously.

“Fire in the East Bay hills is a major, major issue,” Chapot said, noting that two of his gardening clients lost their houses to the devastating Oakland hills firestorm of 1991, which killed 25 people, injured 150 others, and destroyed nearly 3,800 homes. “They should police it.”

Chapot said he decided to speak out about his concerns after he brought the situation to the attention of law enforcement officials last month and they seemed disinterested in the problem. He said that, during his shift on April 18, he discovered two small campfires that weren’t actively burning but clearly had been extinguished very recently. Later that day, he went to the UC Police Department to file a formal report about the fires, but that police officials refused to write up a report. In an email he later wrote to East Bay Regional Park District officials explaining his dismay, he said a UCPD officer dismissed his requests, saying, “‘We’re aware of it, they burn fires up there every day.'” Even though the fires were already out, Chapot said he wanted to file a report so that at least the department would have a record of them, which could help motivate police to address these ongoing hazards — and better police the area to discourage illegal campfires.

“If a cop had taken my report, I would’ve been satisfied,” Chapot told me as I followed him on a recent Grizzly Peak cleanup. That morning (Monday, May 5), we saw evidence of multiple campfires on the turnouts by signposts 14 and 15. “That could smolder for weeks,” he said, pointing to a scorched log, noting that the campfire smelled fresh. The following Monday, he observed more fire pits, he later told me.

It’s likely that the turnouts will get even more visitors as summer approaches. In recent years, the Grizzly Peak stops have become more popular as UC officials have cut down trees in the area, opening up the vistas to incredible views of the Bay Area, said Dan Grassetti, director of the Hills Conservation Network, a group that has been critical of campus officials’ tree-cutting strategies. “It’s created this party atmosphere at these turnouts,” he said, noting that the placement of enormous logs at these sites has made them attractive hangout areas. “This is sort of an unintended consequence of UC’s work.”

He emphasized that he appreciates that more people are using the parks and visiting the area, but said the fire risks must be addressed. “It’s a big problem, especially when we are getting these earlier, warmer summers.” Grassetti, who lives nearby in the hills, said he has seen more illegal campfires in recent years as well as a rise in people throwing lighted cigarettes out of their car windows. “These areas … are getting used a lot more, but folks are doing things they shouldn’t be doing.”

UCPD spokesperson Lieutenant Eric Tejada said that addressing fire hazards is a priority for the department. “We’re always vigilant to make sure people don’t have open fires. … It’s something we do take very seriously,” he said, adding that, given the 1991 Oakland hills fire, “people who are natives of the Bay Area and Oakland and Berkeley know how important it is.” UCPD, he continued, also has a hill patrol made up of trained students who walk the area trails and look for illegal campsites or fires. The patrols generally operate on a daily basis during the summer and on the weekends during the fire season in non-summer months, he said. “We want to have a presence up there as much as we can.”

If there were active campfires, police officers would get involved to put out the blazes, and under certain circumstances, issue a citation. In order to do that, however, officers need a violator to cite, Tejada said, and records show this rarely happens. From January 2011 to May 2014, UCPD only issued one citation for an illegal fire violation in the areas of Grizzly Peak Boulevard, Centennial Drive, Strawberry Canyon, and the associated signposts and trails, according to a UCPD records supervisor. Tejada didn’t have details on the lone case, but said that a citation of this nature would likely be classified as a misdemeanor.

Regarding Chapot’s criticism that police would not take his report, Tejada said, “I think that was more of a misunderstanding. We are looking into it.” He said that police investigate any call regarding an illegal fire, but don’t necessarily take a report every time. “It depends on the officer at the scene making a determination,” he said, noting that if a fire pit looks old, for example, a report may not be warranted.

Officials with the East Bay Regional Park District’s Fire Department did not respond to requests for comment nor did UC Berkeley’s campus fire marshal. Avery Webb, deputy chief with the City of Berkeley Fire Department, said that, while his department does not cover the Grizzly Peak area in question, the potential for fires in the hills is always a concern: “If someone happens to see this activity happening, we very much appreciate being informed.”

Still, it can be challenging for law enforcement officials to act on these kinds of calls. In an email to Chapot, Steve Riggs, a deputy fire marshal with the Berkeley Fire Department, provided some insight: “One difficult aspect of this situation is that until there’s a major loss (which we’re all trying to avoid of course), illegal fires are either infractions or misdemeanors. This means that for illegal campfires to be a citable offense, the campfire has to be witnessed by a law enforcement officer.”

Increasing citations or police presence isn’t the only way to reduce fire hazards in the Berkeley hills, said Grassetti, who argued that a better solution would be to create a “vegetation-free buffer zone” near the Grizzly Peak turnouts to mitigate the risks of a fire spreading. “If they leave those species near the roadway, they are … going to rapidly transfer fire into the forest.” Removing shrubs like hemlock, thistle, broom, and poison oak would be a fairly easy fix, he argued. “It’s not rocket science. As long as there is highly flammable vegetation near the road, sooner or later it’s going to be ignited.”

Asked about the possibility of a buffer-zone, Sal Genito, UC Berkeley’s assistant director of grounds, custodial, and environmental services, told me in an email: “I think it’s a great idea and worth pursuing. … [I]t’s a high priority for me to manage the campus open space in a safe and useful manner [and] removing unwanted vegetation is absolutely a good plan and something people can [expect] as the program gains some momentum.”