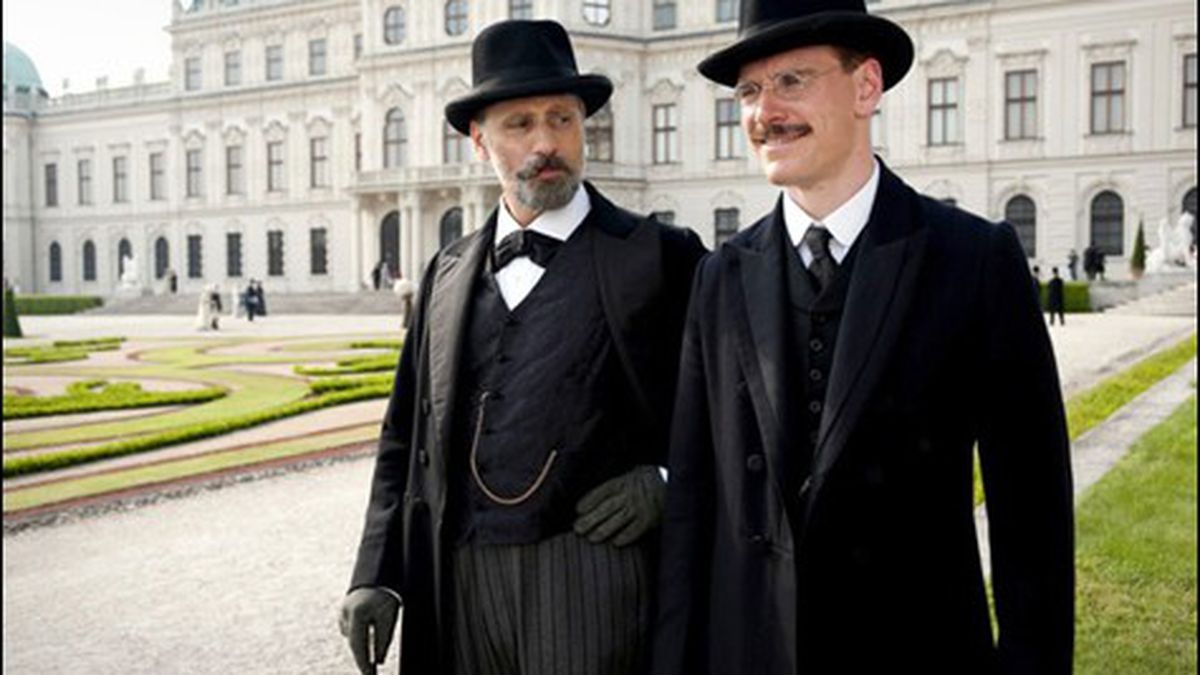 Once upon a time in Hollywood, a service station with a sense of humor announced on its marquee: Free Psychiatric Visit with Car Wash! That irresistible offer (it actually existed, somewhere on Sunset) came to mind as Carl Gustav Jung (Michael Fassbender) and Sigmund Freud (Viggo Mortensen) put their heads together in David Cronenberg’s A Dangerous Method — what might have been, what probably should have been, a window into the thought processes of two of the 20th century’s most influential minds.

But something happens during the rinse cycle of the car wash. That something is Sabina Spielrein (Keira Knightley), a stupendously disturbed young Russian Jewish woman who arrives at Jung’s psychiatric clinic in Zurich, Switzerland in 1904 in a state of panic, literally chewing the air and yowling at the universe. Armed with his theories and precise manner, Jung undertakes to treat Ms. Spielrein and soothe her tortured soul. We’re made to understand that if she had not had wealthy parents, her life would be spent in one of those dark hellholes reserved for the insane a hundred years ago.

Modern readers may find this hard to believe (ahem), but the doctor falls in love with his patient during the course of treatment. This development troubles Jung, a family man with a wife, Emma (Sarah Gadon), and numerous children. So Jung has more than theoretical questions bothering him in 1906 when he travels to Vienna for a visit with his colleague Freud, to discuss the fine points of the nascent practice of psychoanalysis over brandy and cigars. It’s one of those “present at the birth” moments that movies cherish. The two doctors’ initial sit-down skull session lasts thirteen hours.

In these exchanges screenwriter Christopher Hampton — working off his stage play The Talking Cure as well as John Kerr’s book A Most Dangerous Method — seeks to at least sketch in the divergence of the Jungian and Freudian approaches. Jung takes issue with Freud’s over-reliance on sexuality in explaining psychoneuroses (asserts Jung: “There must be more than one hinge to the universe”). After Freud analyzes Jung’s dreams, the Viennese Jew defensively dismisses the Swiss as an Aryan mystic who adores Wagner — true enough, since Carl and Sabina’s favorite opera is Das Rheingold — and who desires to play god. Hampton’s screenplay telescopes mountains of correspondence, medical papers, and the two men’s growing notoriety into a tidy series of scenes. Trouble is, Freud and Jung’s meeting of the minds is never quite as compelling as the collision of the two bodies back in Zurich.

Cronenberg, of course, is notorious for spicing up his films with forbidding medical and sexual overtones — who will ever forget Jeff Goldblum’s suppurating sores in The Fly, the grotesque surgical instruments in Dead Ringers, or Crash‘s parade of broken limbs? Turns out Sabina is the world’s first officially recognized masochist, and her shrink/lover’s therapy for his “jewel of great price” involves spankings and rough sex. Sabina needs Carl but he doesn’t need her. The relationship runs its course. We wince in anticipation of the Fatal Attraction moment, and neither Cronenberg nor Knightley lets us down.

Overexposed actor Fassbender (Shame, Jane Eyre, X-Men: First Class) handles the role of Jung with kid gloves. He’s the unwilling underdog to the celebrated Freud, played with sly gusto by frequent Cronenbergian Mortensen. At the crux of the situation is Knightley’s Sabina, like fellow sufferer Otto Gross (Vincent Cassel in a beautiful walk-on) a patient-turned-initiate. When Jung finally breaks down sobbing at Ms. Spielrein’s feet his “philistine bourgeois complacent cowardice” (in her words) hangs out for all to see. Europeans, and the rare North Americans like Cronenberg, can never resist squeezing a laugh or two out of situations like these. And if in the end A Dangerous Method is the mildest and best-behaved adventure in Cronenberg’s filmography, we still get our money’s worth from eavesdropping on the Columbus (Freud) and Galileo (Jung) of psychoanalysis. But our car is still dirty.