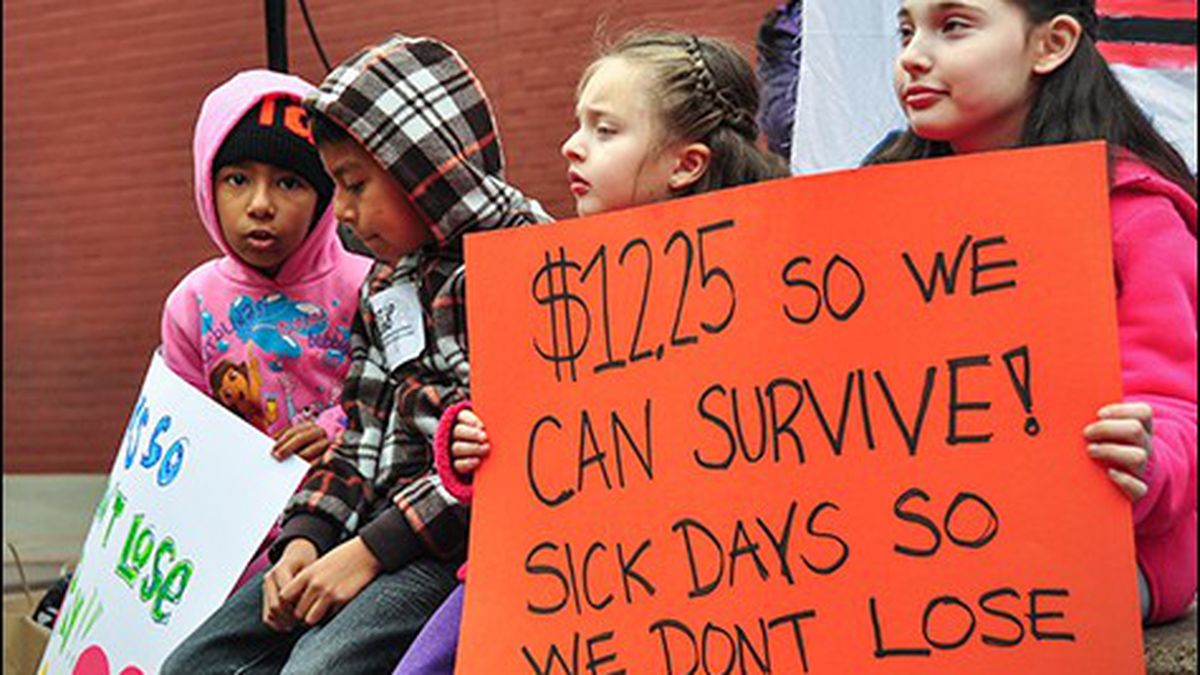 A Biased Report on the Minimum Wage?

A city-funded study that criticizes a plan to raise the minimum wage to $12.25 an hour in Oakland was conducted by a member of a group that has led opposition to the proposal.

At a meeting last week, Oakland City Council members reviewed the findings of a city-funded study on the economic impact of increasing the minimum wage. The report, prepared by an outside consultant, Linda Hausrath of the Hausrath Economics Group, found that if Oakland voters approve a minimum wage increase to $12.25 next year, small businesses in the city would face much higher labor costs. The study concluded that many Oakland businesses will therefore reduce employees’ hours or lay them off. Small business owners could also “put expansion plans on hold while these adjustments go on,” Hausrath warned the committee members, “and some businesses might consider closing or moving.”

Councilmembers Pat Kernighan and Lynette Gibson McElhaney said the Hausrath study provided evidence that the Lift Up Oakland ballot initiative, which has qualified for the November ballot and would raise the minimum wage to $12.25 in March of 2015, would harm Oakland’s economy, and that a different plan is needed. “As news got out about the Lift Up Oakland plan, I was hearing from the Chamber [of Commerce], nonprofits, and small businesses who were saying, ‘I can’t handle that kind of increase,'” Kernighan said in an interview. “Our economic development staff hired Ms. Hausrath because they also suspected this was going to cause problems for many of Oakland’s businesses. They wanted to have an actual factual analysis and try to quantify it.”

“As I met with the Lift Up representatives on several occasions, some of the consequences that are now becoming manifest and known were not contemplated in their effort,” said McElhaney, referring to the alleged negative impacts of increasing the minimum wage that were highlighted in the Hausrath report. “I believe if they had known about these they would have been able to talk about phasing and carve outs,” she added, referring to features of an alternative minimum wage proposal drafted by the Oakland Metropolitan Chamber of Commerce that would slowly phase a minimum wage increase over several years to a level less than Lift Up Oakland’s proposal, and would exclude some categories of workers from the increase entirely.

Based on these concerns, and bolstered by the findings of the Hausrath report, Kernighan introduced legislation last Thursday to put a competing minimum wage measure on the November ballot that she said is “almost identical to what the chamber has been proposing.” If Kernighan’s plan makes it out of the next Community and Economic Development committee meeting on July 22, it will go to a vote of the full council the following week to determine whether or not it will compete with the Lift Up Oakland measure in November.

But UC Berkeley economists who conducted an earlier study on the likely impacts of a minimum wage increase in Oakland say there are multiple problems with the Hausrath report. “Based on what we understand about the Hausrath Group’s methodology, we believe that their analysis is overstating the costs to businesses of the proposed Oakland minimum wage law,” said Annette Bernhardt, a visiting researcher and professor of sociology with the Institute for Research on Labor and Employment. “The core problem appears to be that the authors use methods and data that are ill-suited for estimating the increase in labor costs that would result from the proposed law. In addition, the authors also erroneously include the recent state minimum wage increase from $8 to $9 in assessing the impact of the Oakland law.”

In an email to the Express, Hausrath defended her report. “[E]conomists often have different methodologies and data sources. Our approach is well-documented and well-reasoned.” She added that her analysis sought to assess “the impacts on business costs assuming the total wage increases that would have to be funded by Oakland businesses within an eight month period.”

But critics contend there’s another possible reason for why Hausrath report’s emphasized the ways in which a higher minimum wage might harm Oakland’s businesses: her professional and personal affiliations. The Hausrath Economics Group is a member of the Oakland Metropolitan Chamber of Commerce, the business lobbying organization that has led opposition to the Lift Up Oakland $12.25 minimum wage ballot initiative.

Hausrath’s contract with the city shows that she was paid $24,500 to write the report, coincidentally about the same dollar amount a full-time worker can earn in one year with a wage of $12.25. Hausrath’s hourly wage, however, was $190 an hour. There were no other bidders on the contract. The only other consultant that expressed interest in conducting the minimum wage study for the city was the Bay Area Council. The contract’s scope of work specifically requested that Hausrath consider the policies that the chamber has been advocating, including phase-ins, and excluding some workers, or creating “sub-minimal” categories that would allow employers to pay below the minimum wage.

“It is quite customary for businesses, institutions, organizations, etc. to be members of Chambers in the cities in which they are located in or near and/or do business in,” wrote City of Oakland spokesperson Karen Boyd in an email. “In fact, it’s important to note that UC Berkeley, which prepared Lift Up’s study on the minimum wage issue, is also a member of the Oakland Metropolitan Chamber of Commerce.”

UC Berkeley’s researchers were not paid with Oakland taxpayer dollars to conduct their research, however. Furthermore, of the more than two-dozen companies that are pre-qualified to bid on economic consulting contracts with the city, only one other firm besides Hausrath Economics Group is a member of the Oakland Chamber of Commerce. Most economics-consulting firms that contract with the city are independent from the chamber.

Kernighan, maintained, however, that Hausrath’s membership in the chamber is “practically an irrelevant issue. She has been doing analysis for the city’s Economic Development Agency for many years.”

Hausrath’s membership in the chamber is only one of her links to Oakland’s top business lobbying group. Linda Hausrath’s husband, Les Hausrath, has been a member of several Oakland Chamber of Commerce committees since 1994. Les Hausrath, a lawyer at the Wendel Rosen law firm, represents clients in industries that are outspoken opponents of increasing the minimum wage, particularly restaurant owners, who have emerged as being among the most vocal critics of the Lift Up Oakland measure. According to the Wendel Rosen website, Les Hausrath frequently represents restaurants owners, and in 2008 he even wrote about “the Oakland restaurant renaissance,” in an effort to recruit more clients.

“They should take the Hausrath study and her recommendations with a very healthy serving of salt,” said Dan Siegel, a candidate for mayor and a supporter of the Lift Up Oakland ballot initiative. “I don’t think you can rely on this work as being objective. It makes a whole lot more sense to look at the [UC] Berkeley study where these folks are at least academics and have a reputation for being objective.”

“I think the more important thing is that councilmembers need to analyze all the data we have access to, not just the one that the city commissioned,” said Councilmember and mayoral candidate Libby Schaaf about the Hausrath report. Schaaf said she’s relying on studies such as the UC Berkeley report that looked at the actual consequences of minimum wage increases in various cities rather than relying on speculation.

“I was surprised that she made recommendations,” Schaaf added about the Hausrath study. “Just because other cities are now doing a phased-in approach, that did not translate for me as a recommendation that Oakland should do the same.”

The Lift Up Oakland coalition sees a more nefarious pattern in other recent actions by members of the city council to advance the chamber’s minimum wage plan over the Lift Up Oakland initiative. On July 1 Richard Rios, a lawyer representing Lift Up Oakland, sent a letter to the Oakland City Clerk’s Office alleging that the council had acted in an “unfair and partial manner by not certifying the validity of the [Lift Up Oakland] initiative petition” at the city council meeting on that day. Per state and city law, a city is supposed to certify a petition for a ballot initiative and place it on the ballot at the city council’s next meeting after the Alameda County Registrar of Voters certifies it. The vote of council members to put an initiative on the ballot is ministerial, meaning they’re required to do it, regardless of whether or not they support the initiative. Lift Up Oakland’s lawyer complained that “the City’s decision to change its July 1 meeting from a regular meeting to a special meeting,” and thereby delay certification of the Lift Up Oakland initiative, “raises further questions about whether the City is acting to prejudice the initiative’s qualification for the November 2014 ballot.”