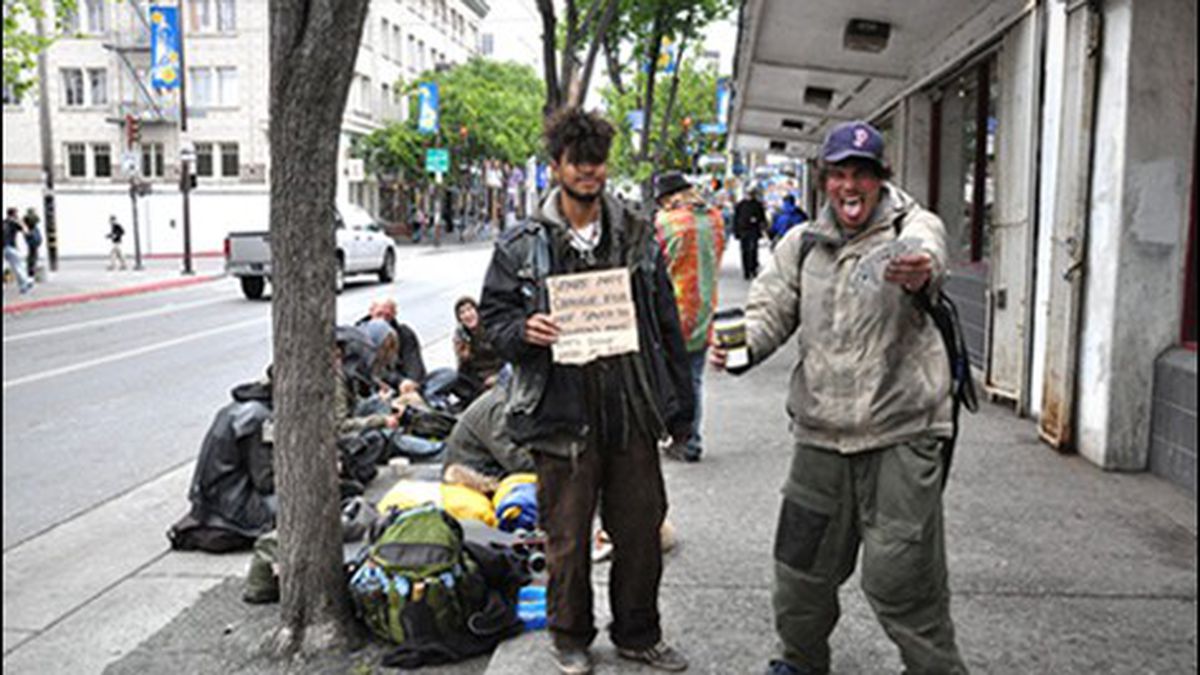 A Ban on Sitting?

Stung by a bad economy, Berkeley merchants are quietly pushing a proposal that would ban sitting on sidewalks in shopping districts.

Berkeley retailers hoped the problem of homeless people camping out in front of their stores would be solved when the city council approved the Public Commons for Everyone Initiative in 2007. The initiative expanded homeless services and banned smoking and lying on the sidewalk in some shopping districts. But a recent city evaluation of the initiative concluded that “there has only been a marginal change, if any, in the overall quality of life in the Telegraph and Downtown areas.”

So now a group of business organizations is quietly pushing a new proposal to ban sitting on public sidewalks as well. They argue that bans on lying and sleeping in front of stores have not addressed the large numbers of youth who sit outside shops, crowd doorways, and frighten customers. The executive directors for two of Berkeley’s most influential neighborhood business associations, while underscoring that the ban is just in the “discussion” phase, both point to problematic street behavior as one reason why shoppers don’t frequent downtown or Telegraph Avenue. “The motivation is how to address the issue of people sitting on the sidewalk all day long, scaring some people,” said Roland Peterson, executive director of the Telegraph Avenue Business Improvement District.

The ban under discussion would outlaw sidewalk sitting during the day in Berkeley’s shopping areas, except when there’s a parade or festival. “It’s not about people sitting down on benches having a cup of coffee,” Peterson continued, adding that the problem is large groups of five to fifteen young people, with “all their stuff,” sometimes with dogs and sometimes panhandling aggressively. “People go to the other side of the street [to avoid them].”

But the proposed ban on sitting is angering many in Berkeley’s progressive community. In recent weeks, a coalition has formed to fight the nascent proposal and contends that business owners are merely blaming street people for the bad economy. “When times are tough, people turn against people who don’t look like them or act like them,” argued Sharon Hawkins Leyden, co-founder and executive director of YEAH, Youth Engagement, Advocacy, and Housing.

So far, details about the proposed ban are hard to come by. But according to the Berkeley Chamber of Commerce web site, the ban likely would “be at least partially modeled” on San Francisco’s controversial sit-lie law. Berkeley city officials refused to respond to press inquiries about the proposed ban, insisting that it’s premature to talk about it. The police chief and assistant city manager also both declined interviews for this story.

Osha Neumann, attorney with the East Bay Community Law Center and member of the coalition opposing the ban, calls it “a stealth ordinance,” and believes that its proponents are trying to “get all their ducks in line and then spring it at the very end of the council session” and pass it when students and others are out of town during the summer.

Still, advocates of the proposed ban aren’t shy about talking about it. The motivation isn’t to criminalize street people, Peterson said. The law would mandate warnings before people are cited or arrested and that in itself would motivate them to change their behavior, he argued.

John Caner, executive director of the Downtown Berkeley Association, suggested that the city might look at Santa Cruz, Seattle, and Santa Monica laws prohibiting sitting and lying on sidewalks, where, he said, ambassadors do “reminders, outreach, and education, and police only get involved in exceptional cases.” While advocates for the homeless in Santa Cruz contend that police there are heavy-handed when enforcing the ordinance, Santa Cruz Vice Mayor Mike Rotkin, speaking to Free Speech Radio News last year, said police response is strictly complaint-driven.

The current ambassadors working in downtown Berkeley and in the Telegraph area are generally recovering alcohol and drug users who were recruited by the Berkeley nonprofit Options Recovery Services, funded through the Public Commons for Everyone Initiative, and trained and supervised by the Telegraph and downtown business organizations. But the city cut the ambassador program’s budget because of a funding shortfall.

Caner, however, said property owners like the program. The downtown association is currently transitioning from a smaller, mostly merchant-based group, to a property-owner-based organization. Caner said the new organization will fund additional ambassadors. The new organization’s goals include making downtown more friendly for shoppers, increasing occupancy rates, and enhancing property values. “The issue is that downtown should be welcoming,” Caner said. “Some people don’t come downtown or to Telegraph because of the street behavior [exhibited by] some people sitting on the sidewalk.”

Councilman Kriss Worthington, who opposes the sit ban and whose district includes Telegraph, said the ambassador program could be more effective if they were trained by social service agencies rather than business groups.

On a recent weekday, Kenji, a young homeless man who sometimes does card tricks for passersby on Telegraph, was sitting on a sidewalk with a group of fourteen or so transients. They all appeared to be between eighteen and thirty years old. They said police had just kicked them out of a campsite “in the hills.” They were sitting on a broad stretch of sidewalk with backpacks, two dogs, and a couple conga drums. Some held signs or asked pedestrians for spare change. Despite the size of the group, there was still space for pedestrians and people in wheelchairs to pass by.

Kenji laughed when asked about a sitting ban. “It’s a waste of the government’s time and money and effort,” he said. “How much money are they going to waste on a bunch of homeless people and kids sitting on the freaking street? Neumann said the law won’t work. “When people see the police,” he said, “they’ll stand up.”

Leyden of YEAH, believes the sit ban proposal is just a cover for what the business community really wants to do with the homeless — “to get them gone.” She said the best thing to do, particularly for the group of young people she works with is to direct resources to housing, education, and mental health services rather than spending funds to enforce a sit ban.

But Caner contends that youth on the streets are “service resistant.” Peterson agreed, arguing that they’re just passing through and “not looking for jobs or housing.” Leyden, however, said that describes only around 5 percent of the 250 young people she sees every year.

Opponents of the ban, however, don’t deny that problematic street behavior interferes with business. Neumann said he’s sympathetic with merchants who find groups of people crowding the sidewalks in front of their stores. But, he said there are already laws to address the issue.

He also argued that the business community is taking advantage of the bad economy to create more laws that criminalize homelessness. Instead, they should blame the dearth of shoppers on the recession or nearby malls. Neumann pointed to an October 2010 report by the city that showed the decline in revenue was the worst in the Fourth Street shopping area (23.8 percent), where few street people are seen, and wasn’t as bad in areas where the homeless most often congregate, such as downtown (6.9 percent) and Telegraph Avenue (9.2 percent).

Neumann said the report made a number of suggestions, such as allowing businesses to stay open late at night, speeding up the permit process for new businesses, and encouraging more festivals that reflect the commercial districts’ identity. And he suggested taxing property owners who keep their buildings empty to in order to collect tax write offs. “There’s no evidence that this kind of ban on sitting has an actual impact on the commercial situation for these businesses,” he said.

Poster for the General Strike on November 2