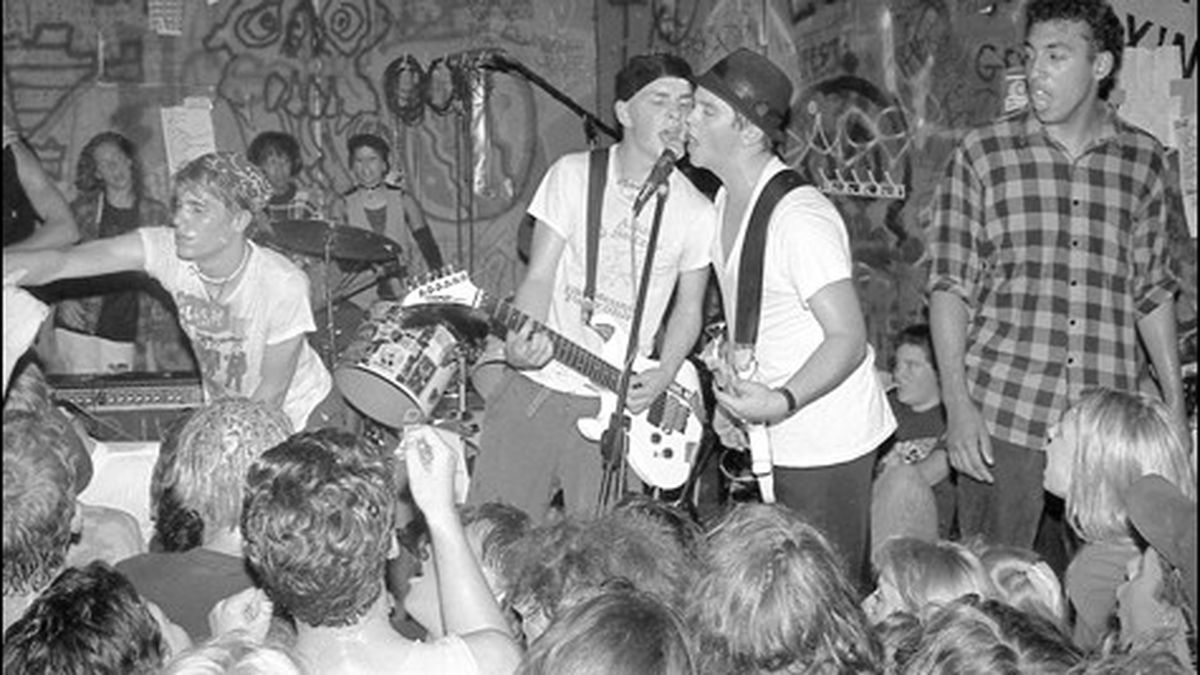 All-ages punk venue 924 Gilman may be forced to close its doors, and bands dance around the volcano. Plus how much musicians make (or don't) online.

Historic all-ages punk venue 924 Gilman says its future is in jeopardy because its landlord is increasing its rent about $3,000 a month starting July 1. According to a blog post on the venue’s web site this week, its landlord has been increasing its rent every year for the last 23 years, but this year’s raise is the biggest ever — equivalent to about twenty years’ worth, or an extra $31,000 yearly. The Berkeley venue is seeking donations to help cover the cost, and is offering T-shirts and tote bags to those that donate more than $25. “Once it goes into effect the clock will begin to tick away as we struggle to generate the extra $31,000.00 a year needed to cover this massive increase,” said the post.

The volunteer-run, alcohol-free venue opened more than twenty years ago in a former auto shop, and helped launch the careers of such notable local bands as Green Day, AFI, Operation Ivy, and Jawbreaker. In an Express article four years ago, Ben de la Torre, Gilman’s then-executive director, said the club has always struggled financially during its history, but was able to survive when other punk venues like Burnt Ramen and Mission Records closed because of its cooperative setup. Even then Gilman was figuring out how to cope with an annual 3-percent rent increase, as well as rising gas costs for touring bands. As a result, the venue began to sell Gilman T-shirts and other merchandise.

What Musicians Make (or Not) Online

A couple weeks ago we wrote about YouTube‘s Musicians Wanted program enabling independent musicians to try and cash in on their online presence. But a recent article making the rounds online indicates that cashing in is much harder than one would think. According to a revealing infographic designed by London-based writer and designer David McCandless on InformationIsBeautiful.net, using data from CynicalMusician, DigitalAudioInsider, Music Ally, and “industry sources,” a musician would have to sell 12,399 .99-cent downloads a month on iTunes or Amazon in order to earn minimum wage (not including publishing royalties). Sales via CD Baby are a bit better — earning musicians about 74 cents on the dollar (requiring about 1,562 downloads per month to make minimum wage). Still, that’s a lot of downloads. The data indicates that streaming is even more pitiful (apparently, Lady Gaga‘s “Poker Face,” which was played more than 1 million times, only earned her $167 from the streaming site Spotify). The bottom line: Even though the web has seemingly eliminated the need for the middle-man, independent artists and musicians still make next to nothing.

Spring touring schedules have been massively interrupted by the exploding volcano in Iceland, whose ash has cancelled flights over Europe since April 16. As reported by Pitchfork, a bunch of European bands didn’t make it to Coachella, including Bernard Sumner‘s Bad Lieutenant and Gary Numan, who also had to cancel their San Francisco dates. Delphic also had to cancel its Popscene appearance. Other affected artists include Shrinebuilder, LCD Soundsystem, Crystal Castles, Los Campesinos!, Nas, Damian Marley, and Sharon Jones and the Dap-Kings, who were caught snoozing at an airport in Germany by the Washington Post.

The Bay Bridged reports that From Monument to Masses have called it quits. … A new musical written by Todd Almond, called Girlfriend, is based upon the 1991 Matthew Sweet album of the same name and is currently playing at Berkeley Rep. Read a full review in this week’s issue. … Uptones guitarist Musashi Lethridge left the Berkeley ska band to play with the English Beat. He’s been replaced by Emily Jayne. Also joining the band permanently is drummer Mike Stevens. … Oakland electro-dance band Sugar & Gold is soon to embark on a US tour in support of forthcoming album Get Wet!, which releases on April 27 by Antenna Farm Records. The quintet’s record release party happens on Thursday, April 29, at Bottom of the Hill with Nite Jewel. … Cotati band the Rum Diary has a retrospective coming out May 1 by Parks and Records, which is run by former Rum Diary member Jon Fee (currently of Shuteye Unison) and his wife Mimi. Retrospective 2000-2007 features seventeen tracks, including previously unreleased songs and those only available on vinyl. … And jazz trumpter Eddie Gale is throwing a fund-raiser on April 23 and 24 in order to create a jazz musician health care collective, according to the Oakland Tribune. The shows will feature performances by E.W. Wainwright, Donald “Duck” Bailey, the African Roots of Jazz band, Clifford Brown III, Wayne Wallace, and more at Velma’s in San Francisco. For more info, CaliforniaJazzFoundation.org