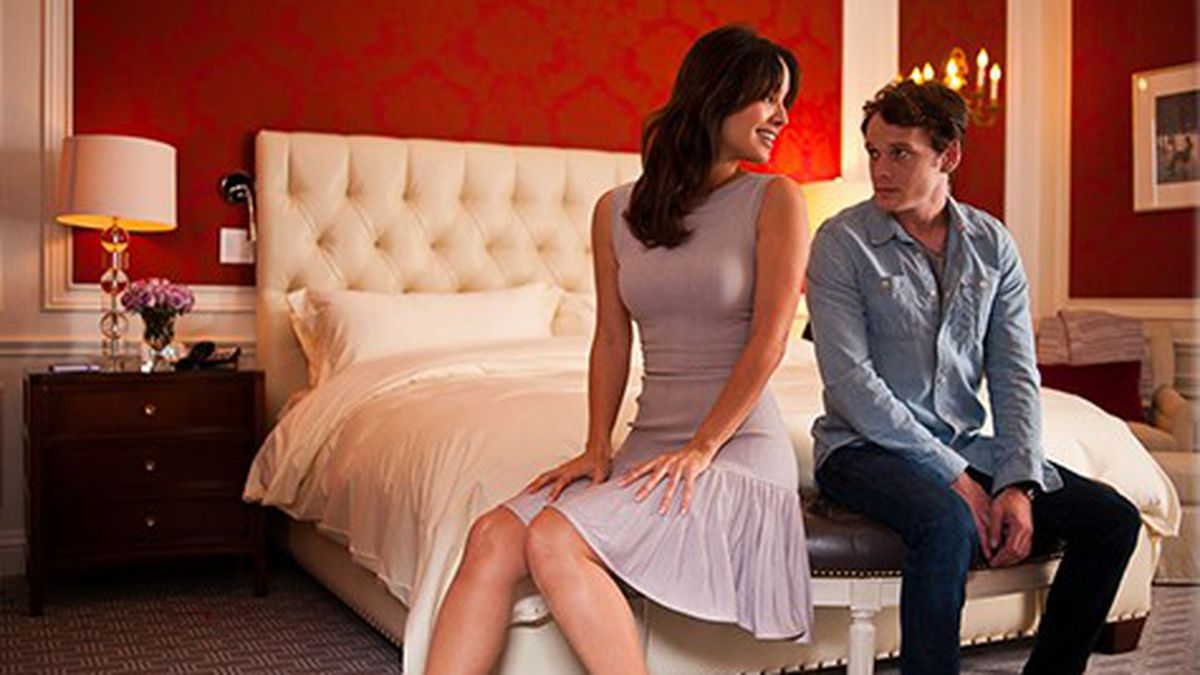 An introduction to the cruelties of the heart.

5 to 7 is determined to try for something completely different in the field of light romantic drama. Where other contemporary romances may casually experiment with sadomasochism, the supernatural, and the fine art of betrayal, filmmaker Victor Levin and his unlikely costars, Anton Yelchin and Bérénice Marlohe, venture into brave new territory with the story of an innocent young man and his introduction to the cruelties of the heart. It’s moist in all the right places, but moisture alone can’t quite carry it home.

Frustrated New York City writer Brian Blum (Yelchin) is meeting resistance from publishers, and has no one with whom to share his disappointments. One day he spies a beautiful woman taking a cigarette break on the sidewalk and impulsively tries out his French-language pickup lines on her. Lucky guess. Arielle Pierpont (Marlohe), the dissatisfied wife of a French businessman (Lambert Wilson), just happens to be in the market for an extramarital playmate to fill in the late afternoon slot of her busy days — the classic cinq-à-sept assignation hour (her reason: “seven years of bad sex”). She finds the talkative young American attractive and proposes an arrangement. He agrees.

Suddenly Brian has a tiger by the tail. Even though their trysts at a swanky hotel — no nudity, sex shots in silhouette — are fun. Arielle fights in a heavier weight class than him. She’s 33; he’s 24. She has two young kids; he has a disapproving suburban mom and dad (Glenn Close and Frank Langella, in welcome comic relief). She tutors him on wine; he prefers beer. She’s an ex-model who disdains the paintings of Edward Hopper and mocks American prudery; he loves baseball and is looking for someone steady and reliable to spend his life with. And yet, when Arielle and her husband Valery invite Brian to their home for a dinner party with their well-connected friends, doors begin to open to him, so the back-street-boy life has its advantages.

There are men who would welcome such an arrangement, but Brian balks, possibly because he has had his fill of rejections. What he needs is full acceptance with a sense of stability, i.e., someone like Valery’s paramour Jane (underutilized Olivia Thirlby), who happens to be an acquisitions editor at a book publisher. At this point we think we know where 5 to 7 is going to end up, but it stymies our expectations and unerringly goes for the dullest, least interesting denouement possible. Long before that, questions pop up in the audience’s minds: What’s a wildflower-gathering, sensitive male like him doing with a lusty sex bomb like her? At what point does “harmless” become “annoying”? Just because he was brought up Jewish, does that automatically make him a nerd? Does he really think that watching Jules et Jim is going to help him understand his sophisticated transatlantic bed buddy? Is that really how a writer gets published in The New Yorker? And so on.

Writer-director Levin, a TV veteran who co-exec-produced a season of Mad Men, squanders any number of saving-grace humorous possibilities. He seems intent on breaking the heart of his male lead to prove a point. Actor Yelchin, at home in costumed Star Trek and Terminator situations, fidgets his way through the earthbound scenario. His Brian is a schoolboy Proust stranded in a world of George Clooneys and Brad Pitts. Levin’s story makes him look ridiculous. Marlohe the former Bond girl (Skyfall) has an easier job — purr, seethe, and sigh. Not the luckiest pair of lovers, or the most fortunate use of two hours of anybody’s time.

Best Foreign Publication: Place to learn which sari to wear

Slap Hitter: Cal beats the Best and the Worst now...