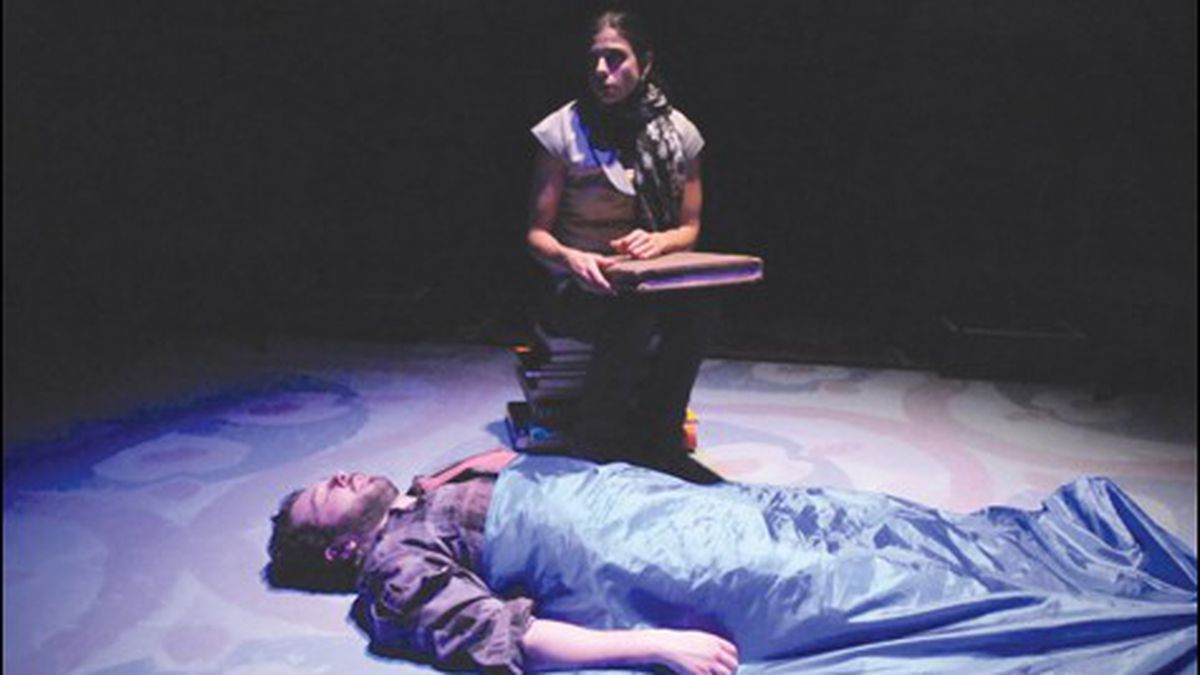 All theater critics know to be skeptical when faced with a small-company production of an ancient canonical text. Especially when said text derives from an ancient folktale. Even more especially when said folktale is as open-ended as One Thousand and One Nights, the Arabic story of a young virgin who used storytelling as a rhetorical device, namely to forestall her own execution. By now it’s a pop culture commonplace, referenced in comic books, sci-fi, crime fiction, Hollywood films, and novellas. Poe, Borges, and Barthes all integrated the story in their work. Jason Grote tweaked the template for his 2005 play 1001 (now playing at Berkeley City Club, in a new Just Theater company production), which is partly about the power of story, but mostly about the Israel-Palestine conflict. Conceived five years ago in New York, it’s a perfect fit for Berkeley, where perhaps one in every three performance arts projects center on Israel-Palestine. It’s also wildly entertaining.

The success of 1001 owes largely to director Jonathan Spector and set designer Drew Kaufman, who found creative ways of using the compact space at Berkeley City Club. Most of the plays produced there occur in one room, where characters can easily flit in and out, thanks to a pair of side doors. But this play endures wild shifts in time and space. The story-within-a-story format requires at least thirty different scenarios in the course of ninety minutes. A small, elevated portion of the room must serve alternately as a wedding altar, a minaret tower, a lecture podium, and a pier at Chelsea. Kaufman hung curtains, and used lighting to imply the scene changes. He decorated the floor and walls to look like one continuous Persian rug, which made the whole room seem airier, or perhaps more pliant. Spector and stage manager Louel Señores blocked each scene in isolated corners of the room, so that another could pop out of nowhere and change things on a dime.

Perhaps the most important elements of Kaufman’s design were the stacks of books scattered everywhere on the floor to emphasize the literary-ness of the play. It looked like a visual representation of Borges’ Library of Babel, which is actually a labyrinth, but could also be a picture of the author’s mind. (Incidentally, Borges makes a cameo in 1001.) The books didn’t all look like old palimpsests; rather, they were a mix of classics, chemistry manuals, and glossy paperbacks, with or without nice spines. Only one old tome lay among them, and it served multiple purposes. Occasionally it was a book. Once it became a large scroll for a character named Dahna (Rachel Rajput) to sign, in order to receive a large, unidentified package from a Burka-clad UPS deliverer. (Predictably, the box contained a magic lamp.) Later on, the tome masqueraded as Dahna’s laptop computer, so that she could instant-message an Arabic businessman in London.

1001 has two parallel narratives, and roughly a dozen narrative threads. The original story is about cruel King Shariyar (Anthony Nemirovsky), who weds a series of unknowing virgins only to behead them. After running through every available babe in the kingdom, the king tries bagging beautiful Scheherazade (Rajput), daughter of his vizier (Lance Gardner). Scheherazade preempts her own death, supposedly by telling a story that ends on a cliffhanger. Really, it’s sassiness and force of personality that makes the king fall for her — in this version, at least. In the second story, a Jewish guy named Alan and an Arab woman named Dahna (also played by Nemirovsky and Rajput) fall in love at Columbia University. They bond over mutual support for the campus divestiture movement, make a pilgrimage to Gaza, then settle in a cramped New York apartment, where Dahna works on creative writing while Alan writes a dissertation on post colonialism and Internet porn. (“I’m not making you aware of your ‘Otherness,’ am I?” he asks her at one point.) The actors make their character roles seem continuous. Dahna is obviously Scheherazade in contemporary dress; Nemirovsky renders both Shariyar and Allan as bumbling, possessive men whose self-interest blunts their good intentions.

The larger social point of 1001 seems fairly simple. It’s something about the power of story, or dialogue working better than violence, or the idea that a long protracted war in Gaza could actually be boiled down to two competing narratives. In some ways, it’s a heavy play. People get beheaded, brained, stoned, bludgeoned, thrown from towers, and otherwise abused. It’s also fairly racy, with at least three simulated sex scenes — including cunnilingus and a hand job, plus one near-full-frontal cameo by actor Aleph Ayin, who was definitely a good choice for the part. But it’s still light, humorous, and packed with pop culture allusions, which make the scenes race by at a fast clip. Scheherazade was an aggressive orator who used stories to manipulate people. Grote, to his credit, does not.

The Proof Is in the Pudding Cup