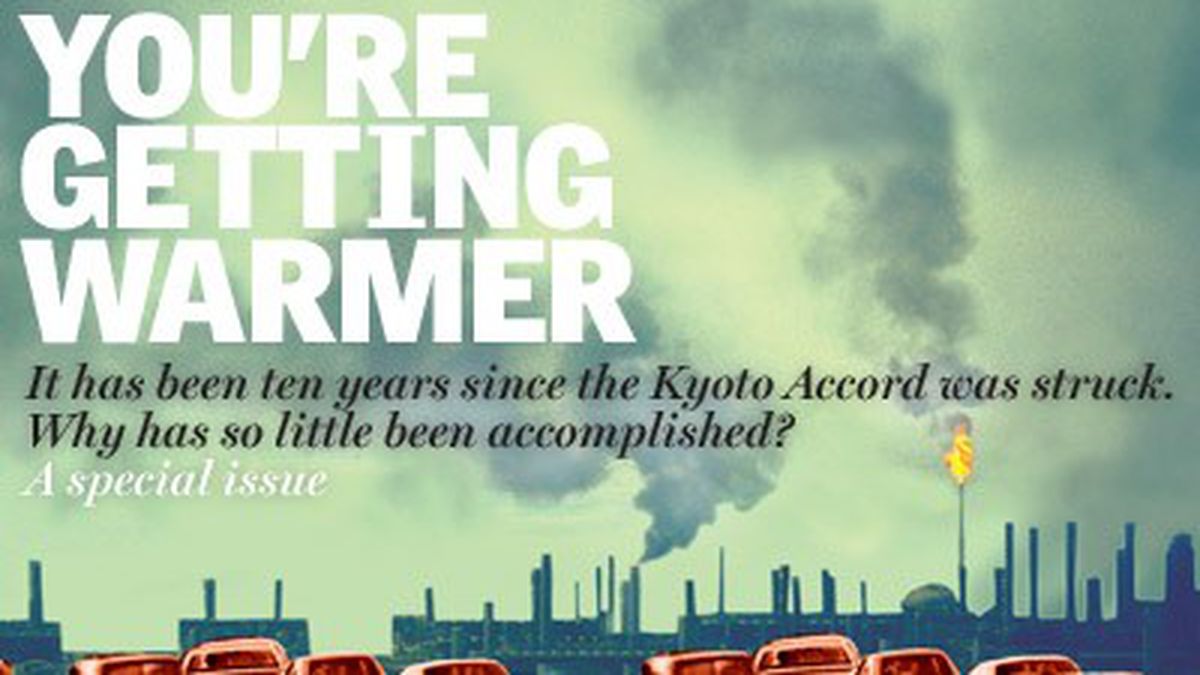 The Kyoto Accord began the race to halt global warming. On its tenth anniversary, why are we barely past the starting gate?

I remember well the final morning hours of the Kyoto conference. The negotiations had gone on long past their scheduled evening close, and the convention-center management was frantic. A trade show for children’s clothing was about to begin, and every corner of the vast hall still was littered with the carcasses of the sleeping diplomats who had gathered in Japan to draw up a first-ever global treaty to curb greenhouse-gas emissions. But when word finally came that an agreement had been reached, people roused themselves with real enthusiasm. A long decade after the first powerful warnings had sounded, it seemed that humans were finally rising to the greatest challenge we’d ever faced.

The only long face in the hall belonged to William O’Keefe, chairman of the Global Climate Coalition, otherwise known as the American coal, oil, and car lobby. He’d spent the week coordinating the resistance — working with Arab delegates and Russian industrialists to sabotage the emerging plan. And he’d failed. “It’s in free fall now,” he said, stricken. But then he straightened his shoulders and said, “I can’t wait to get back to Washington, where we can get things under control.”

I thought he was whistling past the graveyard. In fact, he knew far better than the rest of us what the future would hold. He knew it would be at least another decade before anything changed.

In that span of time, we have come to understand that not only is the globe warming, but also that we had dramatically underestimated the speed and the size of that warming. By now, the data from the planet outstrips the scientific prediction on an almost daily basis. Earlier this fall, for instance, the melt of Arctic sea ice beat the old record. Beat it in mid-August, and then the ice kept melting for six more weeks, losing an area the size of California every week. “Artic melt unnerves the Experts,” the headline in The New York Times reported. And they were shaken by rapid changes in tundra-permafrost systems, not to mention rain-forest systems, temperate-soil carbon-sequestration systems, oceanic-acidity systems.

We’ve gone from a problem for our children to a problem for right about now, as evidenced by, oh, Hurricane Katrina, California wildfires, epic droughts in the Southeast and Southwest. And that is just the continental United States. Go to Australia: It has gotten so dry there that native Aussie Rupert Murdoch recently announced that his News Corporation empire was going carbon neutral.

The important political reality to know about the ten years since Kyoto is that we have barely done anything. Oh, we have passed all kinds of interesting state and local laws, wonderful experiments that have begun to show just how much progress is possible. But in Washington, DC, nothing. No laws at all. Until last year, when the GOP surrendered control of Congress, even the hearings were a joke, with “witnesses” such as novelist Michael Crichton. As a result, our emissions have continued to increase.

Worse, we have not made the slightest attempt to shift China and India away from their use of coal. Instead of an all-out effort to provide the resources so that they could go renewable, we’ve stood quietly by and watched from the sidelines as their energy trajectories shot out of control: The Chinese now are opening a new coal-fired plant every week. History will regard even the horror in Iraq as one more predictable folly next to this novel burst of irresponsibility.

However, if you’re looking for good news, there is some. For one thing, we understand the technologies and the changes in habit that can help. The last ten years have seen the advent of hybrid cars and the widespread use of compact fluorescent light bulbs. Wind power has been the fastest-growing source of electric generation throughout the period. Japan and then Germany have pioneered with great success the subsidy scheme required to put millions of solar panels up on rooftops.

Even more important, a real movement has begun to emerge in this country. It began with Katrina, which opened eyes. Al Gore gave those eyes something to look at: His movie made millions realize just what a pickle we were in. Many of those, in turn, became political activists. Earlier this year, six college students and I launched StepItUp07.org, which has organized almost 2,000 demonstrations in all fifty states. Last month, the student climate movement drew 7,000 hardworking kids from campuses all over the country for a huge conference. We have launched a new grassroots coalition, 1sky.org, which will push both Congress and the big Washington environmental groups.

All this work has tilted public opinion. New polls actually show energy and climate change up high on the list of issues that voters care about, which in turn has made the candidates take notice. All the Democrats are saying more or less the right things, though none of them, save John Edwards, is saying them with much volume.

Now it is a numbers game. Can we turn that political energy into change fast enough to matter?

On the domestic front, the numbers look like this: We have to commit to reductions in carbon emissions of 80 percent by 2050, and we have to get those cuts underway fast — 10 percent in just the next few years. Markets will help — if we send them the information that carbon carries a cost. Only government can do that.

Two more numbers we’re pushing for: zero, which is how many new coal-fired power plants we can afford to open in America, and five million, which is how many green jobs Congress needs to provide for the country’s low-skilled workers. All that insulation isn’t going to stuff itself inside our walls, and those solar panels won’t crawl up on the roofs by themselves. You can’t send the work to China, and you can’t do it with a mouse: This is the last big chance to build an economy that works for most of us.

Internationally, the task is even steeper. The Kyoto Accord, which we ignored, expires in a couple of years. Negotiations begin this month in Bali to strike a new deal, and it is likely to be the last bite at the apple we’ll get — miss this chance and the climate likely spirals out of control. We have a number here, too: 450, as in parts-per-million carbon dioxide. It is the absolute upper limit on what we can pour into the atmosphere, and it will take a heroic effort to keep from exceeding it. This is a big change — even ten years ago, we thought the safe level might be 550. But the data is so clear: The earth is far more finely balanced than we thought, and our peril much greater. Our foremost climate scientist, NASA’s James Hansen, testified under oath in a courtroom last year that if we didn’t stop short of that 450 red line, we could see the sea level rise twenty feet before the century was out. That’s civilization-challenging. That is a carbon summer to match any nuclear winter that anyone ever dreamed about.

It is a test, a kind of final exam for our political, economic, and spiritual systems. And it’s a fair test, nothing vague or fuzzy about it. Chemistry and physics don’t bargain. They don’t compromise. They don’t meet us halfway. We’ll do it or we won’t. And ten years from now, we will know which path we chose.&#8;

Bill McKibben, a scholar in residence at Middlebury College, is an author and environmentalist who frequently writes about global warming. McKibben’s essay was commissioned by the Association of Alternative Newsweeklies. Approximately thirty member papers will be publishing the essay this week.