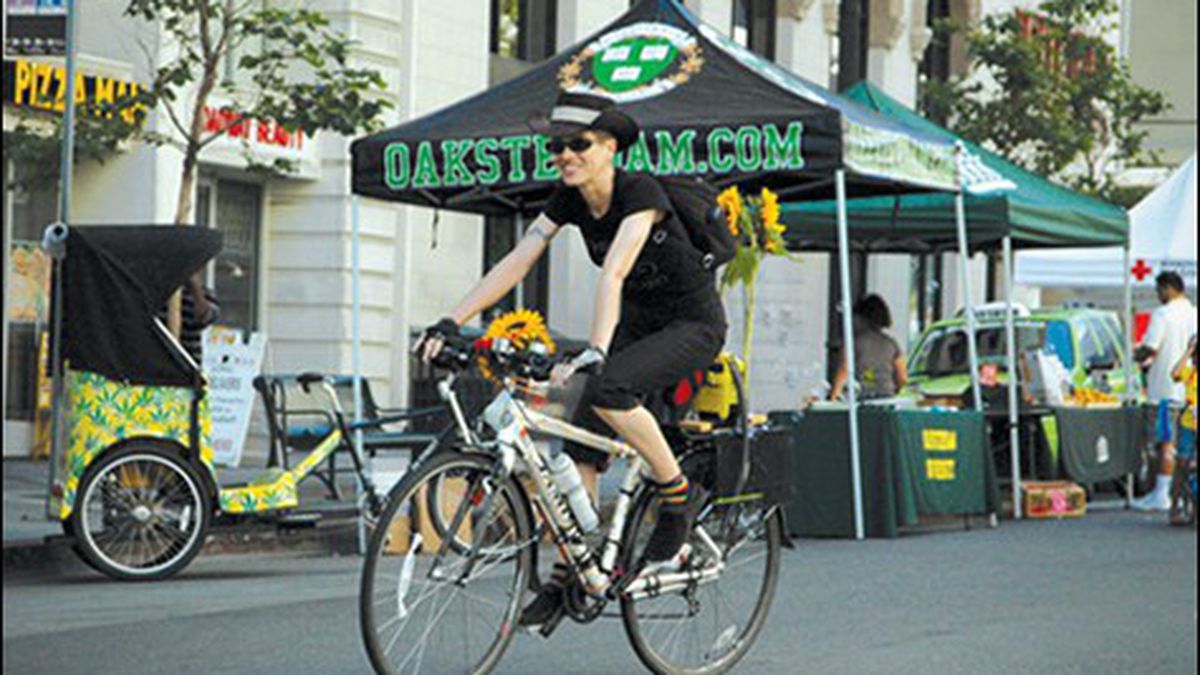 Will Oakland Become a No-Festival Zone?

Organizers say the prohibitive costs of permits, fire inspections, and police overtime is starting to discourage events in the city.

Twenty-five years ago, Oakland had only two major arts events. Now it has thirty. There are art and wine fests, bike-to-work events, cupcake tastings, beer and bratwurst celebrations, sustainable food galas, pub crawls, gallery crawls, neighborhood block parties, dancing by the lake, and parties after dark. It’s gotten to the point that local arts boosters will find just about any excuse to party. But Oakland’s burgeoning festival scene is increasingly facing a large financial risk. The costs of city of permits, along with having to hire off-duty police officers for event security and pay for expensive fire department inspections, are much higher than in other cities. In fact, the numerous fees have forced some Oakland festivals to beg for help from city leaders to avoid shutting down or scaling back significantly.

Take Oaklavia. When it launched in 2010, the two-mile-long, car-free event was one of Oakland’s most ambitious. But at $25,000, its budget was extremely lean. Event organizer Walk Oakland Bike Oakland and coordinator Karen Hester didn’t expect to make any money. But they came up with a viable plan, allocating roughly a third of the money to producer salaries, and the rest to production costs. The organizers projected $6,000 for police compensation, basing the number on conversations they’d had with Oakland police Sergeant Pete Espinoza and Lieutenant Sharon Williams.

But the organizers apparently were way too optimistic. A month before the event date, Espinoza e-mailed Hester a police estimate of $20,000 — more than three times what she’d anticipated. It included remuneration for 34 patrol officers, working six hours each at an overtime rate of $80.39 an hour. Hester was horrified. She fired off an urgent e-mail to Councilwoman Rebecca Kaplan. It looked as if Oaklavia would have to be canceled.

Fire inspections can get pricey as well, Hester said, pointing to a September e-mail she received from Deputy Fire Chief James Williams, concerning the Rockridge Out and About festival, which she also produced. It included $1,800 for two fire inspectors to work four overtime hours each, meaning that each of them were to be paid $225 an hour. The total bill from the fire department, including the fire inspection and other costs, came to $2,632. Hester called it a pyrrhic victory, since she had called Councilwoman Jane Brunner to talk the fire department down from an asking price of $4,000.

Between hiring police and paying for fire inspections and special event permits, costs can become outrageous, said Consuelo Jacobs, who organized Sweet Shoppe dessert festival and the Old Oakland Beer Festival last year. “What’s an issue in Oakland is permit fees,” Jacobs said, citing the $300 base fee for “anything that calls itself a festival,” along with a $552 minimum for fire inspectors, clocking 2.5 hours of overtime at $225 an hour. The fees “have gotten so high that it’s become cost-prohibitive to do events,” she said.

Naturally, it’s become harder and harder for festivals to absorb these costs. The Thursday Night Live series canceled two events in Old Oakland last year, organizer Tina Aiyer said. “They never stay for the whole two and a half hours,” she said of the fire inspectors. “They stay for twenty minutes, but you have to pay them for two-point-five hours.” She added that in her private dealings with city employees, most have been very up-front about their own usurious practices. “When you go to the office, they tell you they’re broke,” she said. “Because the city is so broke, each department is using the permitting process to make their own money.” She said that fire inspection on a Saturday has become an extremely coveted job, because it allows for easy overtime pay on top of a city salary.

Aiyer’s current monthly festival, The Find, a vintage and antique fair in Jack London Square, might face cancellation because the organizers haven’t made any money to recoup the overhead, which included several high permitting fees — $881 for fire and a $150 police fee for public assembly. “You can’t have a legal event until you’re fully permitted, and they have a blanket-fee cost for everything,” Aiyer said. It especially hurts small events, she said, because they don’t have the ability to solicit $100,000 sponsorships from large companies like Comcast. Hester said that she’ll likely have to scale back this year’s Temescal Street Fair, a popular annual event that she coordinates in North Oakland, because of expensive city fees.

Paying for festivals has been more difficult in Oakland since the budget crisis two years ago, said Karen Boyd, who serves as assistant to the city administrator. She said the city used to have a special fund set aside for parades, runs, and street festivals, which subsidized arts events and helped defray the cost of police and fire overtime. “The elimination of that fund put a real strain on organizations,” she said. While larger festivals like Art & Soul are still able to pay for themselves, the smaller ones are starting to fizzle out.

But it doesn’t have to be that way. It turns out that neither Berkeley nor Alameda charges for fire inspections, except in the case of Fourth of July fireworks or something equally pyromaniacal, said city spokeswoman Mary Kay Clunies-Ross. Berkeley does nickel-and-dime for other things like parking meter closures ($2 an hour per meter) or “no parking” signs ($2 a sign), but that’s small change in comparison with the inspection fees in Oakland, said Lisa Bullwinkel, who organizes several festivals in Berkeley. Organizers of the Park Street Fair in Alameda have never paid a penny for fire inspection, said Rob Ratto, executive director of the Park Street Business Association. Ratto added that he did pay $2,912 last year to hire two off-duty cops for a weekend, but it was inconsequential.

In Oakland, festivals are required by law to pay for fire inspections and to hire off-duty cops for security. But the amount that the fire and police departments charge is dependent on how many fire inspectors and cops that they say the festivals need. Williams and Espinoza said their fee estimates are based on such variables as street closures and the size of fire lanes. As for the high hourly rates, both said they are set by union contracts with the city. Espinoza acknowledged, however, that police officers come with a hefty price tag. “There’s always a five-hour minimum,” he noted, referring to the fact that each officer must be hired for at least that long under the police union contract. “Are we cheap? We’re not cheap. I’m not gonna lie to you.”

Festival organizers say the fees are simply too expensive — whether it’s because of the large number of personnel that police and fire contend that the events require or the high wage rates demanded by their union contracts.

As for Hester and Oaklavia, she ultimately got Oakland police to lower its fee demand from $20,000 to $9,320.28 thanks to Coucilwoman Kaplan’s office. The event went on as planned, but it lost money — $4,710. It was a cost that had to be absorbed by the nonprofit Walk Oakland Bike Oakland, the event organizer. Like other event planners, Hester said she understands the value of permits, and the need for police officers and fire inspections at some of these festivals. But she also noted that festivals are typically put on by nonprofits that cannot afford to end up in the red.

In addition, the police and fire department’s apparent eagerness to levy costly fees on Oakland festival organizers may ultimately hurt the city economy, especially if it discourages small neighborhood events. The Find was a boost to Jack London Square businesses. The deck at restaurant Bocanova was packed each Saturday afternoon that event took place, Aiyer said, and Heinold’s First and Last Chance Bar got the most business it’s had in a long time. Aiyer and her business partner have booked the space through May, but they might rescind it. They just can’t afford to keep doing the event. “We spent a month of our lives coordinating this,” Aiyer said. “And we didn’t make a penny.”