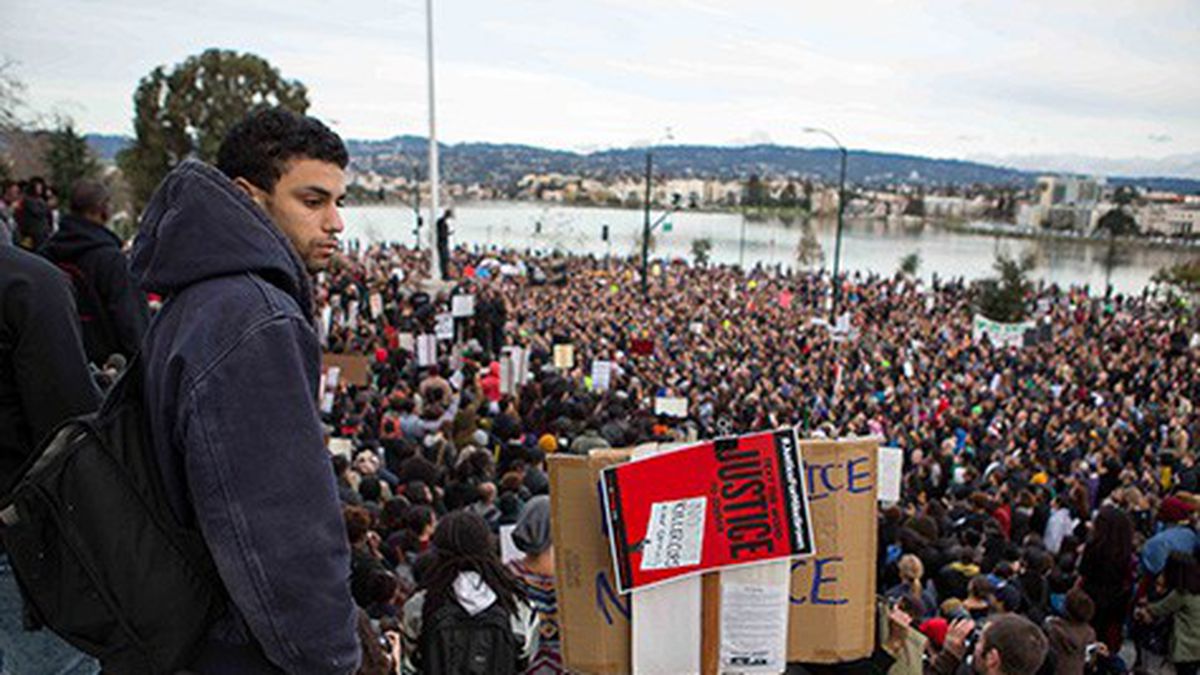 Why You Should Support the Protests

Without street action, change will not come.

In the past few weeks, we’ve witnessed a phenomenal increase in activism across the United States. In dozens of cities, diverse crowds have staged marches, die-ins, and freeway takeovers. Beginning with actions protesting the police killing of Michael Brown in Missouri, and spreading after the grand jury decision in the police killing of Eric Garner in New York, the nationwide demonstrations are the largest and most important political actions in the country since the Occupy Movement. “We have reached a tipping point on police violence,” said Rasheed Shabazz, communications director and editor at the Afrikan Black Coalition.

The protests deserve our support. They are, as Rosemary Bray McNatt, president of the Starr King School for the Ministry in Berkeley, wrote to her community, “Our Deep and Holy Unrest.”

These recent events have laid bare a number of different truths that we should consider. The first is that just below the surface of our society a cauldron of resentment is bubbling, and it will continue to erupt in surprising and disparate ways. The options offered by our present political system for solving the economic and cultural problems facing Americans, especially young Americans, are wholly inadequate. Notably, for poor people of color there seems to be no way out. Before he died, Eric Garner repeated uttered the desperate plea “I can’t breathe.” Like Garner, many Americans cannot breathe today. And when people can’t breathe, they are sure to flail about.

During the Oscar Grant protests in 2010, the Express ran a photo of Grant on the cover of the paper with the phrase “Be Cool” in big letters. The demonstrators in the streets are surely asking a question today: “What has being ‘cool’ accomplished?”

Which brings us to the second truth: Action in the streets appears to be the only way change is going to come in this country. That is as true in the United States as it has been with the street actions in Hong Kong and those that took place in Athens, Cairo, and Istanbul. As painful as it is to say, in today’s democracy, elections alone don’t make much of a difference in addressing police brutality, economic deprivation, or environmental degradation. To take just one case, Oakland has had a progressive African-American mayor, Ron Dellums, and a former-UC-Berkeley-student-radical mayor, Jean Quan, yet police brutality continued during their administrations. As evidenced in the handling of the cop who shot Iraq War veteran Scott Olsen in the Occupy actions, and as our paper has documented for years, rogue cops have traditionally operated with impunity in Oakland. And Berkeley, with its progressive mayor and city council, unleashed some of the worst police violence against protestors in the country, abusing a wide range of people last week, including a minister and news reporters.

It is sad but true as well that national elections do not matter much right now on these issues. President Obama may go on TV and recite the words of Frederick Douglass, but he is refusing to slow the flow of military arms to local police forces in response to obvious police misconduct. His solution is to train local police on how to use military weapons. Why would he want our local police officers trained in the use of military hardware? Who will they use it against?

And street action is necessary because digital activism “disruption” is not going to do the trick. Little is going to change when we only express our outrage on a computer keyboard. It is such a seductive concept that we can change the world as we sit in our homes, practicing activism on one screen and watching Netflix, visiting shopping websites, or playing World of Warcraft on another. But it does not work. Maybe the most perverse example of this ideology is the for-profit Change.org. This “disruptor” company recently received millions of dollars from the tech elite, including the founder of LinkedIn. One tech investor crowed that “petitions are to Change.org as books were to Amazon.” Wonder what kind of change these venture capitalists want or are comfortable with?

Two other features of the present demonstrations are also especially salient. The first is that the demonstrators deserve thanks for raising awareness about the government domination of our urban commons. Slowly but surely, our surveillance state has taken over our streets with cameras and high-tech devices. We are able to use urban space in our communities only if we implicitly consent to be constantly monitored, through cameras and the tracking of our smartphones. Seizing urban space throughout the country, protestors have staged roadway and freeway takeovers, and these actions, although reviled by mainstream commentators, are, like the Occupy actions, a contestation of the control of our commons. While freeway closures are often quite inconvenient for us, reclaiming urban space from a government that seeks to increasingly monitor our daily activities is something we should all support.

Further, it is significant that the current unrest features growing connections among activists protesting some of the biggest problems in our society. Such a bond became evident during the protests on Black Friday between those whose main concern was police brutality and those who were agitating for economic justice. It harks back to the united fronts of the Civil Rights and anti-war movements and the chants of “one struggle, one fight.” Some of those arrested in the East Bay protests are also active in 350.org and with other environmental groups. Today’s linkage of safety from police violence and safety from economic and environmental hardship has great potential. United fronts can be complex and messy, but they give those involved a powerful opportunity to consider systemic solutions. A cadre of young activists is being molded and is learning the power of these linkages. They are cooking up a rich broth of potential responses, debating issues of identity, leadership, programs, and strategies.

A word also must be said about the reaction of those who claim to be offended by the police killings but castigate those in the streets. Even Rush Limbaugh thinks the Staten Island Grand Jury was wrong in the Eric Garner case, but, of course, Limbaugh’s focus has not been on the underlying atrocity, but on the “hassle” caused by demonstrations. Mainstream commentators, such as those in the San Francisco Chronicle, have followed suit, using every opportunity to marginalize the movement. But emphasizing the hassles that protests cause, and ignoring the reasons for the growing outrage, is as harmful as actively opposing the protests.

The deaths of Michael Brown and Eric Garner stemmed from the incredible “hassles” related to living life as a black youth in the poorer sections of the nation, a reality ignored by the naysayers. In the recent eye-opening book — On the Run — on life in one Philadelphia ghetto, author Alice Goffman explores how America’s ghettos are a land within our nation in which the lack of efficacious opportunity and educational advancement, enforced by high-tech surveillance and the demented “war on drugs,” has effectively criminalized life for poor black families today. It is a miracle when anyone can get out in one piece (see “Life, Death, and PTSD in Oakland,” 12/11/13). Goffman’s book is an important read for anyone who would blame black youth for their “anti-social” behavior. If the members of the media are really concerned about hassles, this is where they should aim their focus.

More than in other regions, the mainstream media in the Bay Area has focused on vandalism by demonstrators more than it has on violence by police. For example, Shabazz, a thoughtful Cal graduate, was hit by a police baton while being arrested in a recent local demonstration.

To be sure, violence of any type is problematic; it is scary and costly and often affects the blameless. Disgustingly, a chef at Oakland’s Downtown Wine Merchants was roughed up by some protesters while trying to protect his bar from window-breaking demonstrators. Our paper has sustained fire damage to and theft of our outdoor newspaper racks. We have lost more than $1,000 worth of property in these actions — a not insubstantial amount for us. But no caring person should use the loss of property as an excuse to denigrate the generally peaceful demonstrations that bring attention to, and hopefully action against, police violence toward African Americans. Breaking a window at Starbucks is not the same as taking a black life.

And, based on the revelation last week about undercover CHP officers impersonating masked protesters during a demonstration, it wouldn’t surprise me if some of this activity was the work of undercover police provocateurs. I suspect police presence in the Black Bloc will come to light at some time, just as the hidden police provocation in the Occupy movement and in the Black Power movement of the past has been revealed.

Shortly before his murder, the Reverend Martin Luther King Jr. came to the East Bay to support anti-war protestors held in Santa Rita jail. “There can be no justice without peace and there can be no peace without justice,” he told the crowd.

City of Richmond Begins Suing Its Dispensaries Out of Existence