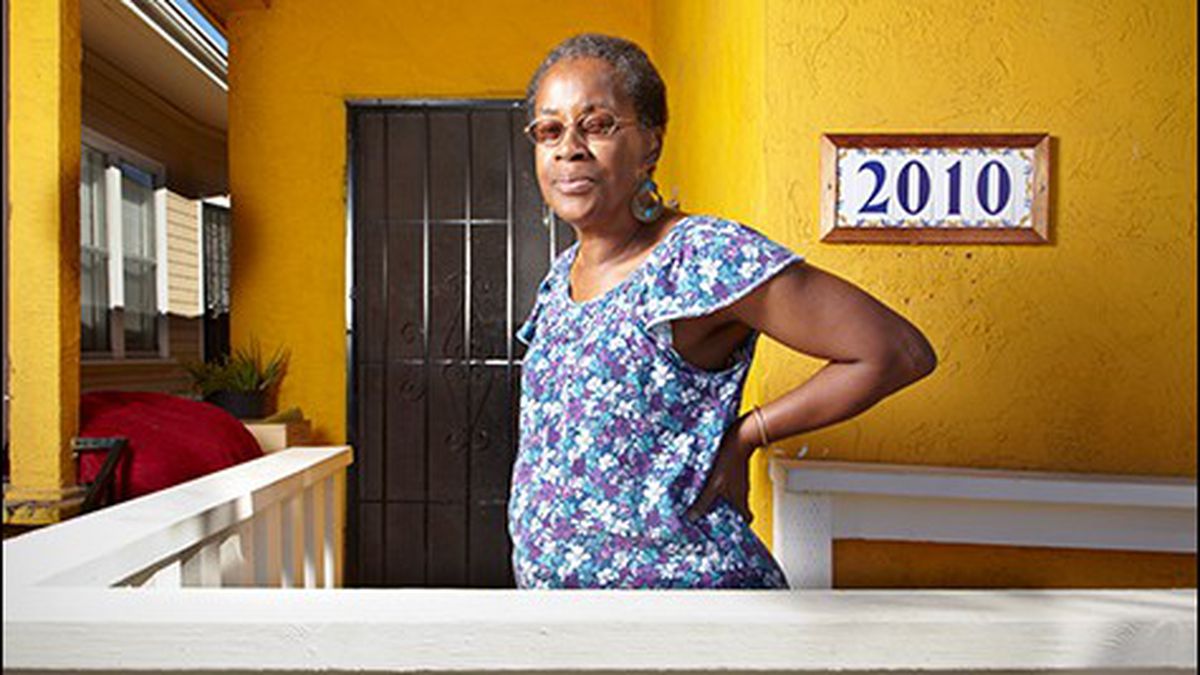 Answer: Large-scale investors. They're snapping up foreclosed houses in the city's flatlands, and then selling or renting them at prices that many residents can't afford.

As the tsunami of foreclosures in Oakland finally subsided over the past year, residents of the city’s flatlands neighborhoods looked around at the new landscape and saw less room for themselves and people like them. Many of their neighbors were gone, of course. And many of the foreclosed homes were snapped up — not by new homeowners, but by large-scale investors, including national and global corporations.

Some of these investors have stuck to the traditional fix-and-flip business model, but others are assembling large numbers of houses to rent. Colin Weil, managing director and co-founder of Oakland-based Waypoint Homes, which owns more than 4,000 houses across the country, has told reporters that he believes the single-family-house rental business will become a $10 billion industry nationwide.

Whether flipping or renting, the new owners have put a higher — sometimes much higher — price tag on living in traditionally low-cost West and East Oakland, home to large black and Latino populations. And the investors have found eager renters and buyers streaming across the bay as housing costs in San Francisco continue to soar. The result, said Steve King, a researcher for the nonprofit Urban Strategies Council, is “wholesale neighborhood change.”

The process is “transferring homes where people have lived a long time, raised families, been part of the community, to younger folks, mostly white,” added Maurice Weeks, campaign coordinator for the Alliance of Californians for Community Empowerment (ACCE).

But the city is “trying to do what we can to forestall the displacement [with new] strategies to keep people here,” said Margaretta Lin, special projects director in the City of Oakland’s Community and Economic Development Agency.”

Several nonprofits are partnering with the city and also launching their own programs with the goal of increasing the availability of affordable housing in Oakland. And ACCE has started a campaign to hold large-scale housing investors accountable to the community.

But some residents see some benefits to the investors’ interest in their neighborhoods. “The big advantage is that a lot of the blight is now being attended to,” said Patty Flores, a real estate agent who works in West and East Oakland. “But it’s kind of pushing the poor or average buyer out of the loop.”

Investors with deep pockets can not only outbid would-be homeowners, but can pay cash, making their offers much more desirable than bids from people who need a mortgage. “It’s very frustrating,” said Flores. “A person with a conventional loan is almost bullied out of the market by investors paying cash, more often in the low end of the market.”

When investors fix up a house and put it back on the market, Flores added, the price increase “can be pretty dramatic. Something you could have bought for 150 is now rehabbed and selling for 350.” But the repairs don’t always justify the higher price tag. There’s widespread suspicion among people familiar with the housing market that “rehabilitation” can mean little more than slapping on a coat of paint. “Unfortunately, some companies do the work without benefit of permits,” Flores said. “We don’t know what’s behind the walls.”

Sele Nadel-Hayes, daughter of former Oakland Councilwoman Nancy Nadel, said it took her a long time to find a house she could afford in West Oakland, where she grew up. “I was finding a lot of houses recently purchased by flippers,” she said. “They looked like they were in a magazine, but they were outside my price range.”

Renters also face rising costs. Martha and Eddie Daniels, both living with disabilities and supporting two teenage grandchildren, had to move when the house they rented in West Oakland was foreclosed several years ago. Now they are being evicted because their landlord sold the house they currently live in. Their rent is now $1,450, said Martha Daniels, and her paycheck — their only income — can’t cover the new rents in the neighborhood, which range from $1,700 to $2,000. “Some people who were tenants before their houses were foreclosed had to move out because they upped the rent,” said West Oakland ACCE activist JoAnne Stamps.

According to a market analysis from Red Oak Realty Investors, purchase prices in Oakland rose 64 percent from the second quarter of 2012 to the second quarter of 2013. And when one investor buys a significant amount of property in a neighborhood, it has an impact on the whole area. In addition, said researcher King, many of the corporations currently renting out single-family houses are planning to sell them in five to seven years, after they increase in value. “Then we’ll have a whole other wave of destabilization,” he added.

And foreclosures, while down dramatically from their peak, are continuing. Lin said 1,500 Oakland homeowners are currently in some stage of the foreclosure process. The Red Oak Realty analysis showed that one-fifth of the home sales in Oakland were of “distressed” properties — foreclosed or short sales — the kind most attractive to investors looking for a bargain. And in sales under $300,000, 45 percent of the properties were “distressed.” That means the lowest-income buyers are the most likely to lose out to investors.

West Oakland is the epicenter of all these changes. Margaret Gordon, a longtime West Oakland community leader, said in her immediate neighborhood, every home from which an African-American family has moved out is now occupied by non-African Americans. “The new people are mostly white and Asian, groups of young people,” she said. “Only a few of the people moving in have families.” Another longtime West Oakland resident, Chantel Burrell, summed up the comments of many of her neighbors: “This is the new San Francisco.”

Gordon pointed out that this trend didn’t start with foreclosures, but has been happening over the past decade. The root cause, she said, is economic inequity. But investors, said Weeks of ACCE, are “taking advantage of the crisis to accelerate gentrification.”

The City of Oakland is about to ramp up its programs to prevent displacement. Since January, the city has been sending canvassers to every home that has a notice of default or foreclosure, in attempts to connect the homeowner to available services. Starting next month, the city will begin a new set of programs to promote stability and affordability, aiming at not only foreclosures, but also vacant homes, said Lin.

For homeowners in the foreclosure process, the preferred strategy will be helping them stay in their homes, Lin said. Some will qualify for the ROOT (Restoring Ownership Opportunities Together) program, led by the Community Housing Development Corporation, a Richmond-based nonprofit. The program buys the home from the lender, and then resells it to the homeowner with a restructured mortgage at current market value.

Although Oakland has no immediate plans to copy the City of Richmond’s controversial proposal to seize underwater mortgages through eminent domain, the city has other options for homeowners who can no longer afford their mortgage payments. Lin said the city could find an investor willing to rent to the current owner with a long-term lease and affordable rent. Or it might arrange a sale to a new homeowner, through a program that will “develop a pipeline of ready-to-go buyers” pre-approved for mortgages. And if the foreclosed property is currently being rented, Lin said, the city will help the occupant buy the home if possible. Otherwise it will look for a buyer who will make it possible for the tenant to stay.

The city will have some cash available to facilitate sales, Lin said, as a result of the settlement of a lawsuit against Wells Fargo by the National Fair Housing Alliance, which charged the bank with “disparate maintenance of foreclosed properties.” In addition, nonprofits, including the East Bay Housing Organization and Enterprise Community Partners, will help raise funds for the program.

On a smaller scale, some nonprofits are working on other affordable housing programs. The Oakland Community Land Trust is buying and rehabilitating vacant homes in East Oakland and making them “permanently affordable,” said Steve King. The Land Trust retains ownership of the land and sells the house to a buyer, who will be able to sell later on, but only at a fixed price. Money from sales will be used to buy more property. “It hasn’t reached the scale people had hoped for,” said King. “Available capital nowhere near matches what the private sector is bringing to the table.” Still, the Land Trust has already bought and rehabbed seventeen properties.

Another nonprofit, Enterprise Community Partnership, is working with the East Bay Asian Local Development Corporation and Waypoint Homes on a program to make some of Waypoint’s houses affordable to current neighborhood residents. Enterprise spokeswoman Rose Cade said her organization is now “trying to put together the capital” for this project, which will start with twenty homes and eventually hopes to scale up to one hundred.

ACCE, meanwhile, is focusing on San Francisco-based REO Homes, which owns and rents out at least 250 homes in West Oakland and has sold other houses it bought there. ACCE’s members have been taking a survey of REO tenants, and a sample of responses shows that people who moved in within the past year are paying rents ranging from $2,100 to $2,500. ACCE activist and West Oakland resident Bill Chorneau, who interviewed some of the tenants, said that’s substantially higher than the $1,400 to $1,700 that was typical five years ago. Chorneau added that many of the REO Homes tenants were dissatisfied with the condition of the houses, complaining of unvented heaters, mice, flooding, and other problems.

Last month about ten ACCE members showed up at the office of Neill Sullivan, whose management company, Sullivan Management, is responsible for REO Homes property. They presented a list of demands, including timely repairs, a commitment to make a certain percentage of the company’s homes affordable to lower-income residents, voluntary inclusion of the homes in Oakland’s rent control law, and help in expanding homeownership opportunities for local residents. “He said no to everything,” Chorneau said, “but he agreed to send out a letter to tenants” encouraging them to report maintenance problems.

Through spokespeople, Sullivan and REO Homes declined to comment for this story.

Activists, meanwhile, are also beginning to float policy ideas, including expanding rent control to include single-family houses (which are now excluded) when many homes are owned by one company and charging a fee to large housing investors to create a fund for local rent subsidies for low-income families.

The need for action will continue, said Lin. “Foreclosed and abandoned properties are an immediate crisis, but also, economic recovery has not lifted everyone’s boat,” she said. “The jobs are not there for people. We need resources to provide for affordable housing.”

Correction: In the original version of this report, we mistakenly attributed two quotes to Margaretta Lin, special projects director in the City of Oakland’s Community and Economic Development Agency. It was actually Maurice Weeks, campaign coordinator for Alliance of Californians for Community Empowerment, who said:

“[The activity of investors in Oakland’s housing market is] transferring homes where people have lived a long time, raised families, been part of the community, to younger folks, mostly white.” And,”[investors are] taking advantage of the [housing] crisis to accelerate gentrification.”

Jean Tepperman
Previous articleBicyclists Get a Sharrow on Oakland’s 40th Street
Next articleMid-Week Menu: Mockingbird Replaces Hibiscus, Off the Grid Comes to Concord, and Uptown Kitchen Celebrates Food Made for Stoners